After a year of work that involved community and committee input, the new housing element for the city of Paso Robles was unanimously approved by the City Council on Dec. 1.

The work began, MIG consultant Genevieve Sharrow said, with a public workshop in January where participants focused on finding creative solutions for financing and ways to facilitate building more housing that include clarity and process streamlining.

With that information, the Housing Constraints and Opportunities Committee reconvened and ultimately played a large role in the recent updates. 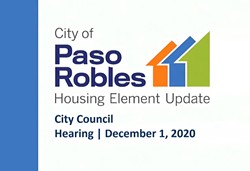 During public comment, committee member David Cook, who's the executive director for Paso Robles Housing Authority, commended the work of everyone involved and said the housing element was helping the nonprofit with its affordable housing project for seniors.

The project is slated to be housed in a mixed-use overlay area that currently doesn't allow for residential projects. However, with the new update, the area would have more flexibility so it could be used for residential, commercial, or a mix of the two.

During the meeting, Sharrow said that the areas in these zones are ripe for redevelopment and could benefit from housing in relation to the adjacent services and businesses in the area.

Cook echoed the statement and said the nonprofit's affordable housing project for seniors would be perfect in the newly flexible area between Niblick Road and Edgewater Lane as there is a bus stop, banking, and other services nearby.

The housing element update also amends zoning ordinances to remove barriers to multi-family residential development, including regulating the maximum building height. The current code sets a maximum height measured by both stories and feet on buildings, and now the city will eliminate the maximum number of stories, but keep the maximum height limit in feet. Development plans of five or more units currently require a Planning Commission review, and that will be revised to more than 10 units, in order to facilitate a streamlined review process.