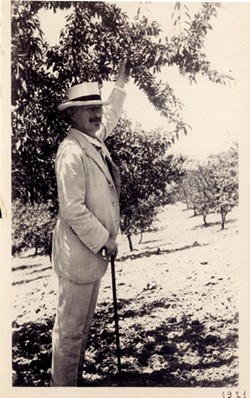 Polish pianist, composer, and statesman Ignacy Jan Paderewski seems to have been the world’s original Most Interesting Man.

He spoke seven languages fluently. He was Poland’s third Prime Minister and represented his country at the Treaty of Versailles. He knew every American president personally, from Wilson to Roosevelt; the latter called him “a modern immortal.” After World War I, it was Paderewski who convinced President Wilson to add the reinstitution of a Polish state to his Fourteen Points. In 1914, he visited Paso Robles for the famed mineral baths and ended up launching the town’s winemaking industry.

Yet this is to overlook Paderewski’s greatest success as a pianist and composer.

“He excelled in the art of producing beautiful and varied tone colors never before dreamt of in a piano—from the lightest and most sparkling to the most violent extremes, which sounded almost orchestral,” wrote Wanda Wilk, the late co-founder of the University of Southern California’s Polish Music Center, in a biographical essay. “He was known for having perfected the touch that could literally make the piano sing. His pedaling was also perfect and his musical renderings, no matter how different, were the fruit of profound and serious study.”

Born in the village of Kurilovka—now part of the Ukraine—and raised by distant relatives, Paderewski studied at the Warsaw Conservatorium, going on to pursue music composition in Berlin and Vienna. With his formidable playing, shock of red hair, and Liszt-like ability to drive his audiences silly with admiration, Paderewski became an enormously successful performer in Europe. Meanwhile, he was also building a reputation as a world-class composer, achieving international fame for his Minuet in G, a short piano piece that would overshadow even his symphony in B minor, Polonia. His opera Manru is the only Polish opera to have been staged at New York City’s Metropolitan Opera.

Paderewski traveled throughout the Unites States in his own railway car, which housed his wife, his parrot, his entourage, and several pianos. He gave more than 1,500 concerts in America, visiting every state, and was so beloved that crowds would often be waiting to meet him when his train rolled into the station.

It was by train that Paderewski first arrived in Paso. At the height of his popularity, with World War I just over the horizon, he bought a 2,000-acre property, Rancho San Ingacio.

The Polish Music Center at USC, now under the direction of Marek Zebrowski, holds the manuscripts of more than 200 Polish composers, including Paderewski. The center also houses an archive of Paderewski memorabilia known as the Paso Robles Collection. Paderewski’s correspondences, rare photographs of the performer in Paso, and even many of his personal effects—such as the Brownie camera used to take those photographs—paint a unique picture of the musician on the Central Coast.

Many of these artifacts will be on display at Paso Robles’ annual Paderewski Festival, a celebration of the larger-than-life pianist and composer timed to coincide with his birthday. (This year’s event runs Nov. 7 to 10).

“Paderewski usually was photographed in situations with heads of state,” explained Zebrowski, who, in addition to heading the Polish Music Center, has served as artistic director of the festival since 2006.

“Of course, we have tons of photographs from his concerts, and he was photographed for formal portraits quite often. But the photos we have from Paso show him at leisure,” he went on. “So we have pictures of him inspecting his vineyards, planting zinfandel grapes, and strolling about with a dog and his wife and having friends over for various parties. These are photographs of Paderewski having fun in Paso.”

Originally started in 1993, the Paderewski Festival was held annually until the early 2000s, when the death of the festival’s founder, Virginia Peterson, combined with the effects of the earthquake that hit Paso in 2003, temporarily suspended the event. In 2006, however, the festival was given new life with the assistance of Zebrowski and the Polish Music Center.

This year’s event kicks off on Thursday, Nov. 7, with a chamber music concert at Cass Winery, featuring violinist Pasha Tseitlin and pianist Nic Gerpe. On Friday, Nov. 8, Karol Radziwonowicz will give a free master class in the afternoon, followed that evening by a concert of jazz and film music with Krzesimir De˛bski and others (both events in the Park Ballroom). Radziwonowicz is the first pianist to record the complete works of Paderewski; De˛bski is a jazz violinist and film composer.

On Saturday, Nov. 9, the documentary film Paderewski: Man of Action, Success and Fame will be presented in a free screening at 10 a.m. at Park Cinemas. That afternoon, the winners of a youth competition put on by the festival will present a recital at the Paso Robles Inn Ballroom. That evening, a gala concert by Radziwonowicz is free to attendees younger than 21.

The event concludes on Sunday, Nov. 10, with a tour, wine tasting, and a lecture by Zebrowski titled “Paderewski in Paso.” Taking place at York Mountain Winery, the lecture will illuminate the pianist’s role as an agricultural pioneer in Paso Robles, where he planted almonds in addition to zinfandel and petit syrah grapes. (The lecture’s setting is an appropriate one: York Mountain was the place Paderewski first brought his award-winning grapes to be fermented, and the winery continues to use the grapes he planted to  this day.)

Lastly, at Studios on the Park, the exhibit “Paderewski Heart” explores the journey of the pianist’s heart following his death in 1941.

“It’s an interesting story, because this is this romantic concept,” Zebrowski said. “You may know about Chopin, that Chopin’s body was buried in Paris, at the Père Lachaise cemetery, but his heart is in Warsaw. … There was this tradition that your heart goes back to your home country.

“But in case of Paderewski, actually it was the reverse: his body was at the Arlington National Cemetery for the longest time, he was buried there as a foreigner under a special presidential decree. That tells you how important a figure he was—not only in music but in world politics. And then when Poland was free, as Paderewski wished to be buried in Poland, they took his body to Poland in 1992, and President Bush and Poland’s president Lech Wałe˛sa accompanied it to Warsaw.

“Now, his heart was removed after he died, and people sort of forgot about it. It was interred at a cemetery in Brooklyn, New York. … Thankfully, it was reburied at the National Shrine of Our Lady of Czestochowa in Doylestown, Pennsylvania.”

Paderewski’s symbolic final gesture confirms his description of his adopted country in his memoirs: “America, the country of my heart, my second home.”

Arts Editor Anna Weltner wants her fingers to be buried under her desk. Contact her at aweltner@newtimesslo.com.