Paso Robles considers turning its airport into a spaceport

Paso Robles Mayor Steve Martin believes that the city airport's future could be in the space industry.

"For 40 years now we've been saying we have an airport that's a diamond in the rough and looking for a way to polish that diamond up," he said during Paso City Council's Aug. 3 meeting. "We actually have a chance to apply that polish."

The polish would be turning the Paso Robles Municipal Airport into a commercial spaceport, but not necessarily with vertical rocket launches that light up the sky. Cal Poly Chief Information Officer and Paso Airport Commissioner Bill Britton, who spoke with City Council about the spaceport idea on Aug. 3, said it could be a number of things—including a horizontal launch platform, an area for research and development, or a manufacturing facility. 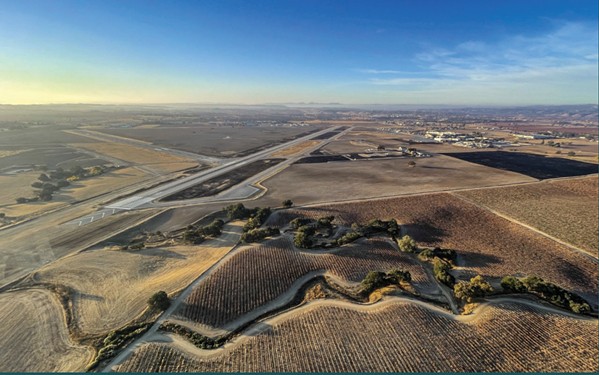 "These are all options that could utilize the runway we have here today without major modifications or disruptions to the airport that we have today," Britton said during the meeting.

Martin asked city Economic Development Manger Paul Sloan to work with Britton to look into what it would take to capitalize on the potential that might come with Vandenberg Air Force Base's transition into a space hub. Recently, the Regional Economic Action Coalition (REACH), Cal Poly, Vandenberg, and state officials announced a commitment to developing the base into a thriving spaceport. Britton said that Martin was wondering what that effort would mean for North SLO County.

"What we're talking about here today is about how the world of space delivery has changed," Britton said. "This area of commercial space is new and emerging."

Working with Cal Poly, the airport could be used by spacecraft that look and act similarly to airplanes to drop small "payloads," such as the cube satellites university students design every year, into low-Earth orbit. Britton said the university is always on the lookout for how they can get their micro-satellites into space.

Currently, there are 12 licensed commercial spaceports in the United States, and on Aug. 3, Paso's City Council unanimously voted to start the pre-application process with the Federal Aviation Administration to join their ranks.

Britton said there are 26 companies around the world focusing on horizontal launch, and they're talking to communities now. He added that Paso would be the first to turn in an application that included the concept of partnering with a university, which could help the airport receive grants.

Paso City Councilmember Fred Strong said the city was a very logical place to put a spaceport, calling it just another tool in the toolbox to creating a successful airport. Martin said that the technology needed—such as fiber optic broadband—to accommodate space industry tenants would grow outward into the community.