The Salinas Riverbed in Paso Robles is experiencing fires that are larger and more prevalent than the local fire department has seen in recent years.

Paso Robles Fire Chief Jonathan Stornetta said there are two reasons the fires in the riverbed are getting bigger: There is a larger homeless population living in the area; and the vegetation in the riverbed is so dense that a fire usually starts there and spreads, making it harder for the emergency agency to control. 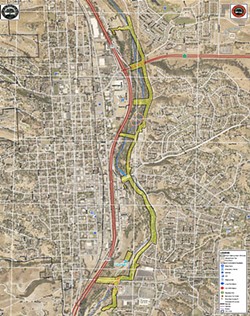 July 22 marked the 70th fire that sparked in the Salinas Riverbed in Paso Robles this year—it was the 185th fire since 2018. A week before the recent fire, the city of Paso Robles declared a local public health and safety emergency in the riverbed and the area that surrounds it.

"What prompted us to declare a local emergency on [July 16] was the fact that the fires are getting larger and are threatening the communities surrounding it," Stornetta said.

The declaration allows the police and fire and emergency services departments to work together to reduce the potential hazards of the riverbed and create a plan for the future.

There were two notable fires this year that pushed Stornetta to say enough is enough. On June 10, a fire that started in the riverbed jumped to Niblick Bridge, effectively shutting the bridge down and damaging lampposts. The major concern was potential damage to the infrastructure of the bridge, as heat can cause the concrete foundation to crack. On June 29, a fire started 150 feet away from a housing development.

Stornetta said that if the fire had spread to the residential area, all of his resources—including personnel from the Paso fire department, Camp Roberts, San Miguel, Atascadero, Templeton, and Cal Fire—were in the riverbed, so response times would have been longer.

"So we're having significant impacts on the other departments throughout North County and impacting their ability to provide services," he said.

The local fire and police departments created a two-phased plan to mitigate the potential dangers of the Salinas Riverbed, the first of which is hazardous fuel reduction.

Under the declared emergency, the fire department is able to make shaded fuel breaks—mowing down dead and dying weeds and cutting limbs from trees up to 8 feet. But the department can't move forward until it hires a biologist to study the potential impacts to the current habitat within the riverbed. The department already has a maintenance permit that runs from August through September, and the emergency declaration allows the department to start immediately and expand on the mitigation work that's already done.

"We just completed our meeting with Fish and Wildlife, the biologist, and presented our scope of the project. So we're moving forward with it and we hope to have the biological surveys completed by the first week of August," Stornetta said, "and we're hoping to start the mitigation work Aug. 7."

Once the department has used the emergency permit for this effort, it can't use it again.

"What we'll do is actually create our own permit on the fire side through Fish and Wildlife and all the other government agencies, and we will have a regular maintenance program," he said.

As part of this first phase, Paso Police Department Comdr. Caleb Davis said some police officers will also be working in the area.

"We will basically go out ahead of the crews as they're working to make sure there's not any homeless camps that are in the area," Davis said.

If they find any camps, he said, the individuals will be moved to another location in the riverbed so they aren't in the way of the fire department's work.

The second phase of the mitigation plan is enacting a community action team, made up of one sergeant and two police officers. The team will start, sometime between September and October, to go in and see who is living in the riverbed.

"It's really about identifying people who want to have help, who want services— whatever those services are—and we're going to direct them in those areas so they can hopefully get the help they need and get out of the situation they're in," Davis said.

The team's goal isn't to necessarily drive the homeless individuals out of the riverbed but to curb some of their behaviors.

"We obviously know from our experiences that there's a lot of drug use going on in the riverbed, which is illegal, and we're certainly going to try and be proactive with that," he said.

Littering, starting a fire, and defecating in the riverbed are also illegal.

"Being in the riverbed is not illegal so that's not what we're trying to get at, but we're certainly going to do our best to clean up the riverbed and make people that are there act in a way that's appropriate," Davis said.

While helping the homeless population within the riverbed is a long-term goal, Davis said he doesn't know that the community action team will necessarily keep the homeless out of the area entirely.

"Our hope is that people will choose to not do those things anymore and change their lifestyle, which would in turn give them opportunities that they haven't had before," he said. "But if they continue to want to live in that environment, then they're not going to be able to get to do those things which are illegal."

The community action team is still in the early stages of figuring of what works and what doesn't in terms of getting the current encampments out. The issue, Davis said, isn't unique to Paso Robles.

Lompoc officials spent nearly $500,000 to clear out the Santa Ynez Riverbed in late 2018. A triage center assisted 69 of the riverbed's estimated 110 homeless residents, and workers removed more than 900,000 pounds of trash. The effort took multiple partnerships with community organizations and Santa Barbara County.

In Orange County, officials worked to clear out the Santa Ana River. The five-week clear out led to a lawsuit that, according to an article in the OC Register on March 8, 2018, aimed to strike "a balance between compassionate treatment" of homeless individuals and "the county's ability to address public health and safety concerns." Δ