North County political leaders responsible for the health of the Paso Robles Groundwater Basin are launching discussions about which multi-million-dollar water projects could help solve the aquifer's woes—and how basin pumpers will pay for them.

In the future, the basin, which serves much of Paso Robles wine country, could start receiving water from the State Water Project, Lake Nacimiento, and/or the Salinas Dam. 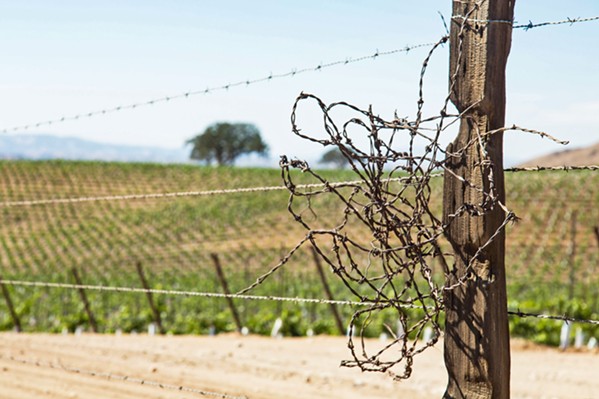 The Paso Basin Cooperative Committee is asking for public input on these proposals and more (see pasogcp.com), as a January 2020 deadline to submit sustainability plans to the state inches closer.

At the committee's March 6 meeting, contracted hydrologist Derrik Williams reported that the future sustainable yield of the basin has been calculated at 61,100 acre-feet per year (AFY). That target sits 29 percent below the amount of water pumped out of the aquifer per year between 2011 and 2016.

Williams explained that going forward, basin users will be faced with a choice: reduce their water consumption, or open their wallets to fund new water supply projects.

"We're going to have to be cutting pumping by acre feet per year or bringing in that much water," Williams, of Montgomery & Associates, told the committee.

Under the draft proposals, domestic users who pump less than 2 AFY will be exempt from fees. Heavier users would be charged a "base pumping assessment" (proposed at $93 per acre foot) up to a specific threshold set for each property based on historical water use. Then, any additional pumping that exceeded that threshold would be charged an "overproduction surcharge" ($832 per acre foot).

Those proposed projects include a combination of recharge fields, injection wells, and direct delivery to farmers, from multiple water sources, with cost estimates ranging from $2 million to $52 million.

A $2-million plan involves building a short 1,225-foot pipe from the State Water Project turnout in Shandon to a 9-acre recharge field. A $52-million project entails laying down 3 miles of pipeline to deliver Lake Nacimiento water to farmers near Paso Robles for irrigation in lieu of basin water.

Other projects with costs in between include sending State Water to Creston for recharge fields ($4 million), injection wells ($16 million), and farmer delivery ($40 million); piping State Water directly to farmers in Shandon ($14 million); and using Lake Nacimiento water to recharge the basin near the Paso Robles airport ($27 million). The committee would first have to negotiate the acquisition of water and land before moving forward on any projects.

The ultimate goal, Williams said, is to ensure the basin meets the sustainability objectives laid out in the eventual 2020 plan. One of those key objectives is that 85 percent of the aquifer's monitoring wells hit their elevation targets each year.

"The proof of success of sustainability is going to be the groundwater levels we measure in the future," Williams said.

Stakeholders around the sprawling basin, which covers several hundred square miles, have expressed varying views on the draft plans. One of the persistent conflicts is between agriculturalists and rural residents, who disagree about which method, conservation or supplemental water, is the best way forward.

El Pomar vineyard manager Dana Merrill warned in his comments that a "ramp down" approach to water use could hurt the region's economy.

"An economic study needs to be included to know whether ramp down or supplemental water is best," Merrill said. "The economic multiplier factor in reverse will devastate the local economy based on the wine and tourist industry."

Creston resident Greg Grewal offered the opposite view at the March 6 committee meeting, putting forth a popular opinion among some community members that the supplemental water projects are designed to enable water banking. That, in Grewal's view, risks "making the basin a private basin that people can profit off of."

"That's all that this is about," Grewal said, suggesting instead that the committee look at capturing more floodwater along natural corridors. "We could do other infrastructural projects that don't take as much money."

Several other commenters noted that decision makers will need more basin data in order to refine the best projects and plans. Williams told the Cooperative Committee that only 12 wells in the basin currently meet all the state's monitoring well requirements. They'll need 50 wells by January 2020.

Steve Sinton, a rancher, vineyard owner, and board member on the Shandon-San Juan Water District, commented that the final sustainability plan might need to remain flexible as hydrologists continue to gather data.

"Overall, much of the information available for this [plan] is uncertain," Sinton said. "The risk, therefore, is that facts will become immovable and immutable if we don't repeatedly state our uncertainties and the need for refinement. ... We will know a lot more as we begin implementation." Δ