Attend an upcoming Paso Robles Groundwater Basin meeting, at the SLO County Board of Supervisors on Oct. 2; county public workshops on Oct. 4 and 8 at Kermit King Elementary School and Creston Elementary School, respectively; the Shandon-San Juan Water District board meeting on Oct. 16 at Shandon High School; and the Paso Basin Cooperative Committee meeting in Paso City Hall on Oct. 17.

One chapter at a time. That's how scientists, water officials, and the public are writing the 20-year sustainability plan for the Paso Robles Groundwater Basin.

Five out of the plan's 13 total chapters are drafted thus far, covering introductions, basin boundaries, and hydrology. But that was the easy part.

Sustainability discussions are about to get a lot more complicated and challenging as the meat of the plan—future groundwater level targets, well monitoring programs, recharge projects, and financing questions—start to take center stage. 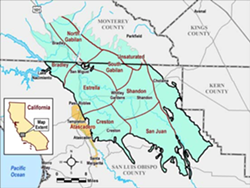 "We need to inform everybody: In order to maintain or raise water levels, there's a cost involved. How much higher do you really want these water levels?" said Derrik Williams, principal hydrologist with Montgomery and Associates, to members of the Paso Basin Cooperative Committee on Sept. 12.

When state lawmakers decided to regulate groundwater for the first time by passing the Sustainable Groundwater Management Act (SGMA) in 2014, landowners and farmers over struggling aquifers were given until 2020 to come up with sustainability plans.

After years of contentious discussions about how that process should shake out locally, landowners overlying the Paso basin now have just a little more than a year to write their plan. It's a task that's not expected to be easy, simple, or cheap. The aquifer serving North County covers 780 square miles, has seven subareas, and includes thousands of wells and residents. What's at stake is the lifeblood of North County's wine and ag industry and the water source for families, ranches, livestock, and more.

Well data shows that the basin is in perilous overdraft—meaning, more water is pumped out every year than is replenished by natural recharge. Between 1981 and 2016, the average annual overdraft was 13,700 acre-feet, or 4.5 billion gallons.

Paso's sustainability plan has to reverse this imbalance, which has already impacted basin landowners with dried-up wells, poor water quality, and other issues. Factoring in basin science, the effects of climate change, current and future water demand, and the will of the people over the basin, the five-member cooperative committee will make the final decisions on the plan by January 2020.

"The idea is to go out [to the community] in such a way that people start connecting with these nebulous concepts and see it as how their well is going to operate in the future," Williams said.

A preliminary survey of 111 basin landowners hinted that expectations for the future vary. Over the Estrella sub-area—located east and north of the city of Paso—the basin has the highest overdraft at 8,400 acre-feet per year, yet the majority of stakeholders surveyed there said they like where the water levels are now. In the Creston sub-area, where there's only a 1,900 acre-feet overdraft, landowners prefer the water levels to return to where they were 10 years ago. The consultant team and cooperative committee want more public input on this as they start to write the next chapters for the plan.

A representative from each agency pumping from the basin serves on the cooperative committee. Willy Cunha, a Shandon area farmer, sits on the board for the Shandon-San Juan Water District. Paso Robles City Councilman John Hamon represents the city. Joe Parent is on the board for the San Miguel CSD. Heritage Ranch CSD has a seat served by Reginald Cousineau. And San Luis Obispo County 1st District Supervisor John Peschong represents the largest swath of the basin—all properties that aren't represented by another agency.

In addition, each agency on the committee also meets separately as "groundwater sustainability agencies" (GSA). So, while the cooperative committee makes final decisions about the plan, every component of it is also vetted and voted on by each GSA.

Looking forward, Williams offered the committee two major issues to start broaching with landowners. One is to find out which landowners are willing to have their wells monitored for groundwater levels, which the state needs in order to track the basin's health over time.

"This is a sensitive topic," Williams said. "We think the GSA is best situated to be in touch with their constituencies."

Williams also raised the question of how the committee wants to treat "de minimis extractors"—landowners who use 2 acre-feet or less water per year. He said, collectively, de minimis pumpers account for between 3 and 13 percent of the total basin demand. As the hydrologists hone in on that exact percentage, the question will be how much, and with what method, should these overliers contribute financially to the sustainability plan. Costs could be proportionately applied or they could be exempt, among other options, Williams said. But he advised that the committee come up with a basinwide policy, rather than one for each GSA.

"Neighbors living next to each other in different GSAs [could be] treated differently in how they're funding projects there," he said. Δ