Francis Bacon, the 16th century man of science and wearer of many, many ruffles, once remarked, “Some books should be tasted, some devoured, but only a few should be chewed and digested thoroughly.”

Only a man with the last name Bacon could talk of books as food.

But he’s not the only one to pun on the affinity between print and provisions. For three years now, the Paso Robles Library Foundation has hosted Bookplates!—a fundraiser for the library that asks local and nationally known artists to create and decorate their own, original plates. Of course, when I say “plates,” I mean the dinnerware and not the decorative label found inside books from which the fundraiser’s name takes its inspiration.

It was Karen Christiansen, the library’s manager and the event’s chair, who coined the clever name when a former foundation board member introduced the idea after being involved with a similar affair back East.

“It’s a cool thing,” Christiansen said over the phone. “The money comes right back to the library. The foundation is really key in keeping our programs going. It will pay for 100 percent of our summer reading program. It’s all of them, and all of that is so vital. The library is 20 years old, and it needs a bit of a facelift.”

Here’s how it works.

Every year, the rules have changed slightly, and this year there will be 50 plates available for auction. Many of these artists are household names here in SLO County. Neal Breton, Jeff Claassen, and manga illustrator Irene Flores all have plates in the mix. Local restaurants, breweries, and wineries, like Aritsan in Paso Robles and Firestone Walker Brewery, have submitted their own creations as well. And even two of the country’s most prominent comic strip artists have gotten in on the game—Jerry Scott, co-creator of Baby Blues and Zits, and Leigh Rubin, creator of Rubes.

Each of these artists were asked to craft their own square plate (last year’s were round) inspired by a book of their choosing. What has resulted is a diverse and vibrant collection of pieces that range from Larry LeBrane’s fused glass frogs to the African tribal look of Paso Robles artist Lynn Kishiyama’s plate.

LeBrane, Los Osos resident and long-time art instructor in the community had recently been working with fused glass, and this plate provided the perfect opportunity to exercise his interest in the glossy medium. The book title came later.

“I wanted a water element for my plate,” he said. “What am I going to put on there? What animals live near or around water? Tropical fish? Too obvious. Sharks are too menacing. I needed an animal that has a big body surface. Frogs! I fell on frogs. Then, I did a title search for books that contain frogs, and I came upon this book.” 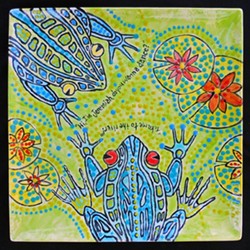 That book is Frog Music by Irish-born playwright and novelist Emma Donoghue. Set in the rollicking world of 19th century San Francisco, it tells the eccentric and extraordinary story of a cross-dressing bicyclist, an exotic dancer, and a mysterious murder. LeBrane hadn’t read the book (he is currently), but the title struck him immediately.

As he tells it, “I thought, ‘Well, that sounds interesting.’ It was the music. I bought some sheet music, and I painted these frogs talking to each other. I usually work with something that I don’t know where it’s going to go. A lot of authors work that way. The title will suggest itself midway through the project.”

This is LeBrane’s typical process. His multimedia works of glass, found objects, and sketches, and paint arise out of a work ethic that prizes creative problem solving.

Both her and LeBrane have music in common. Music from the ’70s in particular. On LeBrane’s plate, there’s a frog named Jeremiah in honor of the classic Three Dog Night song, “Joy to the World.” For Bridenthal, her musical inspiration sways more toward the tunes of a small-time band you may or may not know as Queen.

Throughout the band’s heyday as one of the world’s leading purveyors of anthem rock and besequined spectacle, Bridenthal acted as publicist in the United States—a gig rife with stories so lurid, print is hardly fit to tell them all.

“I had a lot of unusual adventures with them,” she recounted. “I traveled the world with them. They were trailblazers in a lot of ways in terms of production. They were also very, very nice to me, for whatever reason. Maybe it’s due to the fact that I say what I think. That horrified them sometimes, but they also thought it was funny. A band knows if you like them or not. They were fabulous company. … Traveling with them broadened my horizons.”

You can see the band’s flashy influence in Bridenthal’s plate. Made from fused dichroic glass, it resembles the sparkly sheen and exuberance of a disco ball.

“I love flash and sparkle,” Bridenthal said. “When I’m making things, I’m thinking of how it would look on a red carpet.”

Bridenthal’s been making things all her life. She stems from a creative, Central Coast family and grew up arranging flowers, knitting, making her own dolls, and reading voraciously.

This is exactly the spirit that the Bookplates! fundraiser intends to invoke. It’s more than a means to make money.

It’s an artistic opportunity that caters to the creative spirit in adults and kids alike.

“Information and knowledge is power,” Bridenthal wrote in an email to New Times. “The library is the font of that knowledge.”

Jessica Peña will rock you. You can email her at jpena@newtimesslo.com.