A prime destination for epicures serves delightful feasts, with a slice of history

Very little has changed at Paso Robles’ grand old hotel in 144 years, although it was rebuilt after a fire burned down everything except the ballroom in 1940. From the beginning this popular “hot springs hotel” has been a destination for those in need of the hot springs’ healing powers. And the inn has remained loyal to its old-world heritage, until now. The steakhouse and the 1940s coffee shop, with its gigantic circular counter, are being updated by the inn’s new chef, Kelly Wangard, who has taken the menu into the modern era. This talented young woman, who’s passionate about everything culinary, will make those of you who think you don’t like steakhouses think again. 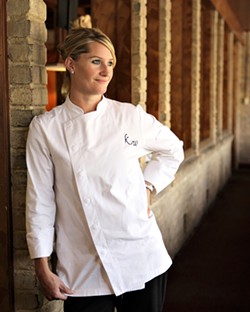 I was excited when the inn’s press people invited me to review the new menu Wangard has created. After all, it takes guts to invite a restaurant reviewer to critique your new chef. But Wangard, who started cooking here last January, totally lived up to their glowing appraisals and my expectations.

“I’m showing the owners what can be done with this restaurant by offering more than steaks,” Wangard said immodestly, but not because she’s an egoist. She’s enthusiastic about the access she has to locally grown products. “It’s ideal for showcasing local ingredients. I like to take classics and give them a twist with fresh flavors and modest presentation.” However, she’s changing things gradually, so she doesn’t lose their regular clientele. She doesn’t take all the credit herself; she praised her sous chef Karrie Hills and banquet chef Chad Brown for helping her upgrade the dining experience at the inn.

I had dinner there with hubby Dan and we tried an array of interesting new dishes. We started with the baby burger on a Hawaiian sweet roll with red cabbage, pesto aioli and Vivant organic white cheddar, which was good but Dan liked it more than I did. We devoured the irresistible fried brie cheese with Port-marinated raisins and apple-radish salad. Wangard’s skilled at creating a fabulous juxtaposition of flavors and textures, which was apparent in several dishes. We both loved the grilled Castroville artichoke, parboiled then brushed with olive oil, salt and pepper and char-grilled, with Meyer lemon mayonnaise and chipotle ranch dressing for dipping. Then Wangard sent out a refreshing, local farm special: blonde gazpacho with Hausser Farm tomatoes, cucumber, parsley, and basil in a chicken broth enhanced with sour cream. The Gruet Blanc de Noirs non-vintage sparkling wine on the wine list provided a nice complement to each of the starters.

Walking into the large dining room with its huge, comfortable booths, old wood-paneled walls and giant fireplace, it’s not difficult to imagine the cowpokes and ranchers of Paso Robles bringing their family (or their posse) here for Sunday dinner. I love sitting beside the windows that overlook the serene gardens between the restaurant and the guest rooms.

This historic inn, which the Martin family has owned since 1999, has served locals and travelers since 1864. And, from what I’ve heard, a few Jesse James (who’s middle name was Woodson) types in the late 1800s. The inn was built next to the main artesian well established by the Franciscan padres in 1797. The hotel’s historical records say: “The founders of Paso Robles, and later the hotel, were brothers Daniel and James Blackburn and Drury Woodson James.”

Wangard, who’s also a Paso Robles local and graduate of Paso Robles High School, recalled: “My first taste of the culinary world was at Cahoots Catering Co.” Inspired by Cahoots owners Lisa Jones and Jim Subject, Wangard moved to San Francisco to attend the California Culinary Academy, afterward working in several upscale San Francisco restaurants. She moved to the Rosewood Hotel on St. John in the U.S. Virgin Islands, where she met her future husband, Gregg Wangard. They spent several years working in a Wisconsin resort (Gregg hails from Wisconsin) and then moved to the Loews Beverly Hills Hotel, when she took a year off to care for their newborn daughter, Elle.

During a visit to her parent’s home in Paso Robles, Gregg discovered the Cliff’s Resort needed a chef. He applied and was hired as Marisol’s chef de cuisine, which finally brought them to Paso Robles. “I always wanted to come back here,” she added. At the steakhouse the word must be getting out about her new menu since Wangard reported proudly: “We’ve beat sales we had in July of last year.”

While trying Wangard’s new entrees on the menu, she told me she and Gregg cook together at home whenever they can: “We like to keep things simple and straightforward to present the best foods to our guests.” Her philosophy of showcasing local ingredients was clear in every delicious dish we tried. The food is straightforward, which I respect, but I’d hardly call her cooking simple. Her well-made sauces and sides perfectly complement her entrees.

We enjoyed the rib-eye steak served with Dijon and b»arnaise sauces and fingerling potatoes. However, we were much more excited about two other entrees: the quail stuffed with mushrooms, spinach, and bacon, with a side of Yukon Gold potatoes, was excellent; and we relished her pan-roasted Morro Bay halibut with beurre blanc and Jardine Ranch almond-and-roasted-red-pepper sauce with a side of petite green beans. Pinot Noir lovers, take note; we decided to go local and order Adelaida’s 2005HMR estate, which was quite versatile in complementing every entr»e, even the halibut.

After sharing so many great treats we couldn’t resist trying the warm Wisconsin bread cheese drizzled with honey, slices of pluots and tiny mint leaves. Wangard paired it with Austin Hope late harvest Roussanne. And finally the conclusion of fresh white peaches and strawberries with almond extract enhanced whipped cream, a perfect dessert. The coffee house menu will soon be updated, too. I can’t wait to see what Wangard does with eggs.