At 7 a.m. on June 10, the San Luis Obispo County Sheriff's Office posted an urgent message on Twitter about an active shooter in downtown Paso Robles.

"The Sheriff's Office is asking anyone in the Paso Robles downtown area to shelter in place at this time. This is an active situation," the post read. 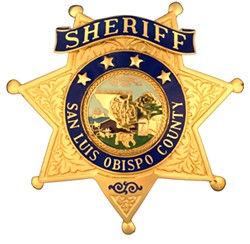 The Paso Robles Police Department is searching for an armed man who fired at the police department around 3 a.m. SLO County Sheriff deputies and California Highway Patrol officers responded to the incident, and one deputy was shot in the face. The suspect fled on foot.

The wounded officer is in serious but stable condition and was airlifted to a trauma center.

The Sheriff's Office described the suspect as a Hispanic male with curly hair in his 20s or 30s.

Via Twitter, the Paso Robles Police Department stated that the shooting stopped at 4 a.m., and law enforcement was still searching for the suspect. At the time, SWAT and the Special Enforcement Detail were conducting a systematic search.

Around 10:30 a.m., the Sheriff's Office issued a press release on behalf of the Paso Robles Police Department—which is currently investigating the incident—stating that a body was discovered in the vicinity of the Amtrak Station at 8th and Pine streets in Paso Robles.

According to the press release, coroner investigators determined the death to be a homicide. The victim was an 58-year-old male who was shot in the head at close proximity.

Investigators believe, the press release states, that the homicide is related to the shooting incident at the police department. As of press time the search for the armed suspect was still ongoing.

"Please keep the [SLO County Sheriff] Deputy who was shot and all other deputies and other local law enforcement officers in your prayers for safety. May they be protected as they continue to search for the shooter and may the shooter be apprehended and brought to justice," he posted.

Law enforcement is asking anyone with information about the shooting to call 911. Δ