The owners of this unique eatery explain the concept on their website and business cards: “Level Four revives the style and savvy of the Prohibition Era of the 1920s.” It’s a blend of fine dining and nightclub that’s quite different from other establishments, with its difficult-to-spot little sign above a door that leads only to an elevator. But push the down button and you’re dropped off in a basement where good food, wine, cocktails, lively music, and a great vibe make it a hideaway you’ll be eager to revisit often. We’re glad they left out the Prohibition part (1920 to 1933) so you won’t get busted for drinking the fine wines of Paso Robles or those exotic martinis.

Level Four was an instant hit and continues to be a very popular gathering spot for Paso Roblans, especially Millennials. Yet each time I’ve visited I’ve found it appeals to adults of every age. Surprisingly, I learned the owners of this restaurant and lounge haven’t found it as easy to keep a chef in the kitchen—but don’t let that scare you. During a recent visit I found the food as good as it’s been since the place opened in early 2008. Co-owner and manager James Glass admitted: “We were lucky enough to get a good cooking team at the beginning who have stuck around.” And that’s despite working under a few chefs who have come and gone.

Recently I dined here with my husband Dan and we found the down-to-earth menu more in tune with the era they designed the club around. That said, we enjoyed one modern appetizer: the Togarashi-crusted ahi ($12) with wakami, spicy miso, and jalapeno salsa—tasty with a definite kick. Our server Johnny suggested pairing a glass of Santa Margarita Pinot Grigio ($8) with the tuna; its bright acidity provided a nice contrast to the heat of the sauce. Our other courses, mostly comfort foods that we Americans love in large portions, included a rich macaroni and cheese “L4” style ($7 for full order, $5 for half) studded with tasty bits of Serrano ham. It’s the type of dish you want when you crave something soulful to eat while nestled on the coach watching a tear-jerker like Sleepless in Seattle. The Caesar salad had the classic dressing just right and was generously doused with thick parmesan shavings. Another giant helping of comfort food was the 16-oz. bone-in, ribeye steak ($38), served with our choice of twice-baked potato (only half a potato but huge), and fresh, al-dente green beans. Obviously, we couldn’t eat it all, but the leftover meat made a nice sandwich the next day.

As much as I love a good steak, the luscious diver scallops ($26) were my favorite that night. I thank Johnny for having recommended them. Although usually served over a white-bean ragout, mine topped a wonderful, earthy lentil stew. Dan’s favorite was the Maple Leaf Farms duck breast made decadent with a black truffle jus and delicious wild mushroom risotto with braised greens. Sated and downright stuffed, we had no intention of eating dessert. Thanks to Johnny, once again, for telling us we had to try the chocolate pyramid with raspberry sauce, fresh raspberries. and strawberries, the latter a bit under-ripe now that they’re out of season. The strawberries mattered little once I tried that delicious dessert, which was like eating a giant chocolate truffle.

The only noticeable change at Level Four over the past year has been the menu, now far friendlier for Paso Roblans. It’s more about comfort food rather than the complex, multi-layered dishes first served here. Their original and creative chef, Chris New, was clearly on a mission to offer food unlike anything locals had experienced. Entrées featured eucalyptus foam, cumin froth, or brown butter powder, to name just a few of the exotic touches he added to his dishes. No disrespect to New, who’s currently working for chef Thomas Keller at Ad Hoc in Napa Valley, but nothing I tasted during my first visit impressed me. 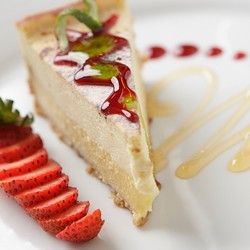 Not that his food wasn’t good—the quality was there, but the myriad flavors he used in preparing each part of every dish just didn’t meld. The situation is much like the winemaker who picks certain wine barrels they think are exceptional and label the blend reserve, only to have critics pan it. New’s menu didn’t impress me or the discerning friends (vintners) who I dined with the first night. Under the exacting Keller, he can learn to harness his creative side and gain the finesse that’s best achieved by working for a master chef.

Glass was right, the kitchen team learned well from the chefs who trained them. For our dinner we selected the outstanding Jack Creek Cellars 2006 Pinot Noir ($56), which complemented everything from the macaroni and cheese to the steak, duck, and scallops in those earthy lentils. I’ve enjoyed this wine on several occasions, and it’s consistently delicious.

The wine list is very well chosen. The by-the-glass selection offers good wines at reasonable prices; most are $8 and some go up to $14 per glass, of mostly local wines. The bottle list has many of Paso Robles’ favorites and hot new labels, such as Booker, Jada, and Terry Hoage. The rest is filled out with solid choices from Champagne, Napa, Sonoma, and Oregon.