Dirt bikes are loud, fast, fun, and soon to be illegal to operate on public land within the city limits of Paso Robles. On Sept. 18, the City Council approved the first reading of a new ordinance that will allow police to punish off-road riders with $100 fines for first offenses and up to $500 for multiple violations. 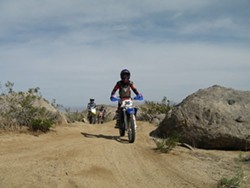 “It’s an issue that crops up from time to time,” Burton said. “This would provide us with specific enforcement authority.”

During public comment, several residents said that screaming engines frequently disrupt the peace in what was once a quiet neighborhood. They urged the council to adopt the ordinance, citing additional concerns over fire hazards, dust, and erosion.

Tim Pilg, who sells dirt bikes and parts in the city, said there’s an enormous passion for off-roading in North County but nowhere to ride that wouldn’t violate the proposed rules.

“As adults, we need to step up and provide a riding area,” he said. “It’s time.”

Councilman Nick Gilman turned that request back to the motorcycle enthusiasts, saying it’s not the city’s job to find such a location. He’d support the idea, but it’s up to those who want an off-roading area to find one, research its potential, and mitigate environmental/noise impacts, he said. Mayor Duane Picanco concurred.

“As far as providing a facility—at this time, we can hardly take care of the things we’re supposed to do,” Picanco said.

The council approved the ordinance 3-1. Fred Strong dissented, but only because he felt the term “off-highway vehicles” was too specific and wouldn’t cover joy-riding jeeps and trucks.