A train barrels by just one block from Paso Underground, obscuring the sound of drizzling rain. I’m sipping one of Orion Stang’s ultra-small-batch Dilecta label releases, his 2013 Match blend of grenache, syrah, and mourvedre sourced from three Paso vineyards.

The wine—like the nearby locomotive—boasts a lingering finish that haunts the senses long after the physical thing is gone. It tastes like eating Bing cherries in an herb garden. 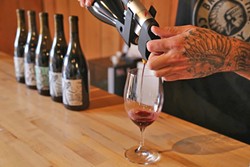 Facing the train tracks (and not much else) at 1140 Pine St., this sparse, industrial wine hub is the kind of place you must deliberately enter. Not many people simply “stumble in,” although plenty are referred by downtown tasting rooms and wine aficionados in the know.

On this rainy day, the space feels calm, a modern temple forged in corrugated steel, wood, and concrete. The dusty wine trails of Paso Robles cover an entire chalkboard wall like a web of veins. Here, only one thing matters: dedication to craft. When you’re only making a few hundred cases a year, it’s about quality, not quantity.

Each Paso Underground member has a unique tie to Westside Paso Robles, a love of Rhône fruit, and a DIY ethic. I want to know: When does wine become obsession?

For Stang, it was the moment he found himself reaching into the kitchen garbage can to sip the dregs of a really good bottle. He was working as a chef in Palm Springs, and although he couldn’t exactly afford to buy the really good stuff, he worked in maddening proximity to it. 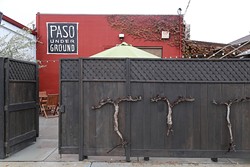 “These were mostly Napa, Washington, Oregon wines, with some French thrown in,” Stang says. “These were $600 bottles. I became mesmerized by wine, and the way a really good wine could make you feel.”

The chef—who also trained in Italy and worked in the Napa area—went on to pass grueling testing to obtain his Court of Master Sommelier level two credentials. A former Cayucos resident with family in the area, Stang chased his obsession to Paso Robles wine country in 2006.

As the tale goes, Stang literally knocked on Booker Vineyards’ door, a new Westside winery at the time. He got the job, became a tasting room attendant, moved up to cellar rat, and eventually to assistant winemaker. A 40-acre estate vineyard served as his greatest classroom.

In 2011, Stang started his own label, Dilecta (which means “to love” in Latin) and, now, he’s found a home to pour. Paso Underground sure is a step up from his own kitchen, where he once conducted casual tastings. Using fruit from Paso to Santa Barbara and winemaking space at local winery Herman Story, Stang has worked his way up from 150 to 800 cases a year. He says that was the “easy part,” although his sarcasm is palpable. The not-so-easy part? Marketing. So far, word has spread the way it always does in Paso: friend to friend.

Over the past two years, Paso Underground has become a go-to spot for artisanal offerings, especially on Friday and Saturday nights, when the locale stays open from 1 to 7 p.m. Still, there is much work to be done. 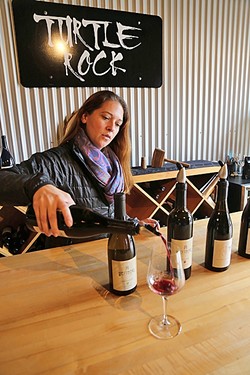 “What you see at Paso Underground isn’t even a fraction of what most of us do on a daily basis,” says Claudia Burns, of Turtle Rock Wines.

Here, everyone wears multiple hats, and each bottle represents years of painstaking attention to detail. Claudia is a warm woman with bright eyes and a love for family that radiates from her very being.

“Our wine all comes back to our daughter, Willow,” she says, pouring me a sip of 2013 Turtle Rock Willow’s Cuvee, my second GSM of the afternoon (this one boasts a dark dried fruit and tobacco moodiness). “We wanted to be able to work and live on the Central Coast, and to be close to Don’s family.”

A local boy and Cal Poly grad, Don grew up on the Central Coast before he and his buddies hopped on a sailboat in search of their next grand adventure.

Over two years, the gang traveled to Costa Rica and Florida, where Don and Claudia met and fell deeply in love. They married on the beach and had their daughter. When the baby was six months old, the pair relocated to the Central Coast to be near family roots.

Don, who serves as assistant winemaker at Saxum, grew up on his uncle’s Highway 46 West property in Paso and was boyhood friends with Saxum winemaker Justin Smith. Now, he splits his time between his duties there, his label Turtle Rock, sister label Westberg (named after his good old Uncle Tom), and his family.

For that reason, you’re likely to see more of Claudia at the tasting room. I recommend stopping by and saying hi. Ask her about the zinfandel grapes Uncle Tom planted back in the ’80s, what’s growing in the Willow Creek District, or her daughter, who just turned 8. She’s an open book with stories to spare. 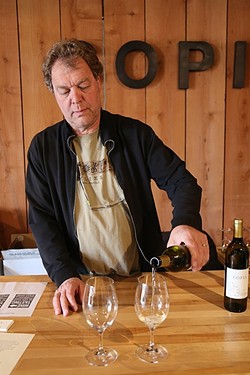 You’ll likely catch Michael Dewit of Copia Vineyards on the weekends, and you’ll likely hear his deep belly laugh before you even spot his face. Like every member of his Paso Underground family, he also has a good yarn to spin. His 2014 Copia viognier is called The Reason, and it’s a citrusy, floral flirt. His latest syrah, The Cure is sold out, naturally. Sorry, folks.

Before coming to Paso Robles, Dewit was living LA, surviving the rat race. After getting his toes wet making wine in a garage with a friend in Sausalito, he got the wine bug—bad. While some folks might have bought more home winemaking equipment or a stack of how-to books, Dewit chose action. The year was 1997, and he had just suffered a “marital adjustment.” France seemed like a damn good idea.

“I thought, ‘I’m going to France and buying a vineyard,’ and that is what I did,” Dewit says. After restoring the old farmhouse, he began making wine from his small vineyard. It was a dream, interrupted.

“After six years living there, I really missed California,” Dewit says. “The climate, the coast, the mountains, the desert. It’s just incredible. Perfect.”

The winemaker eventually found love and a syrah vineyard upon relocating to Malibu, but was soon lusting over the Central Coast, where he could tend a patch of that dynamic Paso Robles soil causing so much commotion.

Dewit puts most of the credit on his buddy Stephan Asseo of L’Aventure, who held epic winemaker dinners in Malibu. The winemakers are still friends, and Asseo is a common patron of the Underground.

“I only have a few acres because I want to be small and stay small,” Dewit said of his latest home, his Paso Robles home. This “small yet mighty” mentality is what makes Paso Underground such a big deal.

This year marks Dewit’s first estate Paso Robles harvest, and it’s currently in barrel, undergoing its magic alchemy. I’m looking forward to coming back and tasting it. If all goes to plan, Paso Underground will still be in the same little glorious hole-in-the-wall. From the street, it’s hard to tell what’s happening in here, but if you stand outside, you’ll see folks laughing on the patio, big black boxes of wine in hand. These people are almost always beaming.

“Selling wines is one of the biggest joys in life,” Dewit said. “The client always leaves happy.”

Hayley Thomas believes in the road less traveled at hthomas@newtimesslo.com.