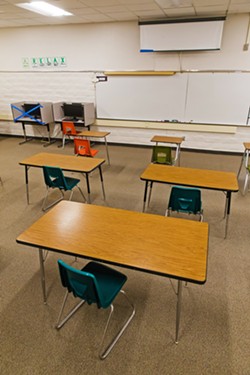 During the meeting, several trustees continued to cite concerns about the course's contents and recent community backlash. The April 13 ethnic studies course hearing garnered 53 emails—52 in support—and 16 public commenters who spoke in support at the April 13 meeting. Comments came from a mix of students, parents, alumni, community members, and educators.

The board failed to approve the course with the amendments it suggested at the March 23 meeting. Those amendments included: incorporating women's issues into each unit; including a unit on Irish and Jewish immigration to the U.S.; increasing emphasis on the ability of different ethnic groups to overcome obstacles and demonstrate achievement and general progress; and including an overcoming adversity unit to showcase resilience and agency.

The second round of amendments that lead to the course's approval included: making it a one-year pilot program subject to review; offering the course to 11th and 12th graders only; and additional course material from authors Thomas Sowell and Ayaan Hirsi Ali.

Baker said she's continued to hear from members of the community who are worried that the course focuses on themes of social justice, social responsibility, and social change. Her greatest concern was that the course included information from critical race theory. Critical race theory, coined as "anti-American" by former President Donald Trump, posits that race is a socially constructed category used to oppress and exploit people of color.

Land assured Baker the elective ethnic studies course, which will also count toward college credit for Cuesta College, does not include critical race theory. This process, Land told the board, reminded him of his marriage in that "teaching is a public trust that extends beyond the classroom."

"This community conversation we've been having for the last month is perhaps like some awkward Thanksgiving dinner table conversations, still an important and necessary part of family and community and education," he said.

Gannon reiterated concerns that he voiced at the board's March 23 meeting that he's worried about the safety of the white students in response to this course.

"I feel that right now there are probably students at the high school that are scared to even say anything against this course for the reprisals that they will get. I am concerned about their safety going forward, honestly," Gannon said.

He felt the course curriculum is "too much" for ninth graders who have already endured so much in 2020—such as lack of social interaction.

"There's the reflective chapters that we see, the introduction to identities for four weeks. It appears that it should be best left to a professional therapist, this explore themselves and how they fit into society and, you know, reflect on this. It just seems to me a little bit more than a ninth grader should be doing," he said.

Board member Reed, who ultimately voted against approving the course, was upset that "somebody is deciding what ethnicities are more disadvantaged or have a better story" that will be covered in the course. Board member Bausch said that he was unprepared for the "onslaught of editorials and letters, emails from people attacking" the board's March 23 vote to approve the course with amendments.

The four trustees reluctantly came to a consensus after Paso Robles Superintendent Curt Dubost expressed his disappointment that a majority of the board continued to take issue with the course curriculum.

"I can't state strongly enough how important I think it is for you to be responsive to the input that you have received from a teacher who has done an incredible job. Give up spring break to work on this nonstop, has poured his heart and soul into that," Dubost said. "It almost feels like some of you may be looking for reasons not to look at this, ... and I hope that's wrong. At some point you just have to say, 'Let's try it because we believe in Mr. Land, we believe in the class, and we want these kids to be rewarded for the passion they've showed for us.'" Δ