Whenever the COVID-19 pandemic is behind us and students return to school, those in the Paso Robles Unified School District might face stricter rules when it comes to cellphone use in class. 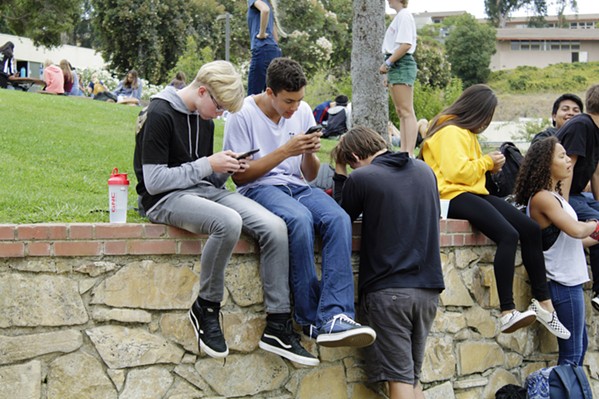 The Paso Robles board of education is considering a new electronic device policy that would prohibit the use of cellphones, smartwatches, and other mobile devices at all district sites during instructional time. The policy, which the board discussed for the first time at a meeting on May 12, is intended to reduce distractions in the classroom, according to Director of Student Services Joseph Williams.

"My concern is that [cellphone use] continues to be one of the top infractions," Williams told New Times.

With the longstanding goal of reducing overall suspension rates in mind, Paso Unified officials hope to reduce the district's cellphone infraction numbers through the new policy, Williams said, or at least make it clearer what the rules are and what to do if a student uses a mobile device inappropriately.

Through the proposed policy, high school students would be required to keep their cellphones and other mobile devices turned off and put away during class and passing periods, but they would still be allowed to use their phones on campus during non-instructional times. Preschool, elementary, and junior high school students, however, would be banned from using their personal mobile devices at any time on campus. All students would be allowed to use their phones in extenuating circumstances, like if instructed to by a teacher or during an emergency.

Previously, different Paso Unified sites had varying cellphone policies and procedures, making it confusing for students, teachers, and administrators dealing with infractions, especially those transferring from site to site.

"We definitely want to make sure we're on the same page and uniform," Williams said.

The proposed policy is also in response to a bill Gov. Gavin Newsom signed in July 2019, which allows school districts to limit or prohibit mobile device use. Since that law passed, some SLO County school districts have gone even further than Paso Unified plans to, including Lopez High School, which banned cellphones entirely in September 2019 and requires students to stow their phones away in lockable pouches during school.

At the May 12 meeting, board member Chris Bausch asked about pouches or cubbies that students could put their phones in during class to ensure devices aren't being used. But Williams said those kinds of materials won't fit into Paso's tight budget.

Though there are still questions about how the policy will be enforced, most Paso Unified parents and teachers support a ban. In a survey Paso Unified recently conducted, roughly 70 percent of 691 parents surveyed said they'd be in favor of eliminating cellphone use during school. A little more than 90 percent of 189 teachers surveyed agreed. In contrast, nearly 91 percent of 1,263 students surveyed said they wouldn't want phones to be banned during school.

The Paso Unified board of education will take another look at the policy before taking further action. Δ