"We were in the front row when the shooting started."

Paso Robles resident Amanda Bean was one of of country music fans who attended the Route 91 Harvest Festival in Las Vegas expecting a weekend of food, drink, and country music. 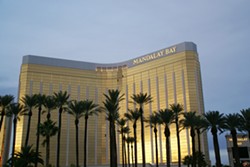 Instead, Bean and her friend, Erika Taylor, found themselves running for their lives as a 65-year-old gunman with a high-powered assault rifle opened fire on the crowd from the 32nd floor of the Mandalay Bay hotel, killing 59 people, including himself, and injuring more than 500 others.

"At first it sounded like pyrotechnics. People were looking around like, 'Where are the fireworks?'" Bean told New Times. "As it kept going, it got louder. ... When the music stopped, people started running from the stage."

Bean said she and Taylor were forced to duck behind a metal barrier between the crowd and the front of the stage. Between volleys of gunfire, she said a group of people was helping others escape over the barrier. Taylor went over first, but Bean was unable to follow after her because the shooting had started again. She was finally helped over the barrier and began crawling under the stage. Under the Bean said she called her mother before hanging up and trying to find her friend.

In a Facebook post to friends and family, Taylor's mother, Nancy, said she received a video call from her daughter during the shooting. Along with her post, Taylor's mother included a photo from the call showing her daughter's face surrounded by darkness.

"Nothing prepares a parent for a phone call from their daughter inside Jason Aldean's band trailer [where] she ducked into, scared to death, as shots rang out and [you're] seven hours away," she wrote.

Bean said that thankfully both she and Taylor had fully charged cell phones and were able to meet up again after being separated. The two got a ride from a group of people transporting injured concertgoers to a nearby hospital. From there, Bean said they spent the night at the home of a friend's relatives until the following day, when they could collect their car from the parking lot of the Excalibur hotel and casino and begin making their way back to Paso Robles. Bean said they arrived back Oct. 3.

Speaking to New Times shortly after arriving home, Bean said she was grateful for the individuals, nearly all total strangers, at the concert who helped her and Taylor, risking their own lives to shield them from the gunfire and escape the massacre.

"They were literally the reason we got out of there. ... They put their lives on the line," Bean said. "Even though this horrible thing happened, there was still good in people who were willing to put others before themselves."

As she reunites with her friends and family in SLO County and tries to move on from what happened that night in Las Vegas, Bean, a self-admitted music fan, already has tickets to another concert at the end of the month. Those tickets, she said, were purchased prior to her trip to Vegas.

In the wake of the shooting, residents planned a vigil for the victims on the Cal Poly campus Oct. 4. Another vigil, organized by Women's March SLO, is scheduled for Oct. 14. The time and location of that event to be determined. Δ