Pasolivo expansion gets the go ahead

Pasolivo received a reluctant approval from the SLO County Board of Supervisors on July 7 to move forward with plans to expand their facilities and host events.

The west-Templeton olive oil company got the county planning department’s stamp of approval to expand and add additional buildings, ramp up olive oil processing, and host industry and private events, but it was appealed. Pasolivo General Manager Hillary Trout told New Times that the plans were a necessary step for the business, which has seen an increase in production and demand since being purchased by the Southern California-based Dirk Family in 2012. 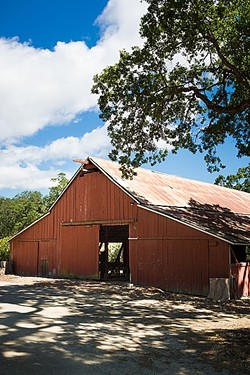 Plans include the demolition of an old red dairy barn, a relic from the expansive Willow Creek Ranch, which used to cover the area before being parceled out. In the appeal, neighbors cited concerns about an increase in traffic to the rural area, noise from events, and whether the new use was appropriate for the area’s agricultural and historic heritage.

One of the two families that appealed the project hired Alison Norton, an attorney with the Santa Cruz-based firm Wittwer & Parkin, who argued that the project’s impacts were extensive enough that they should require an environmental impact report (EIR). Supervisors ultimately decided that the project had already generated an exhaustive amount of studies and public input.

Several area residents—many are part of the new group Save Adelaida—spoke up at the meeting, saying the project is part of a troubling trend of area wineries upping the amount of events they host every year.

One neighbor on Vineyard Drive, Kimberly Ruth, who has had a long career in agriculture and raising livestock, questioned whether Pasolivo’s expansion was truly in line with the area’s agricultural use.

To demonstrate what “real” agriculture was, Ruth pulled out a set of long, pink plastic gloves used to artificially inseminate livestock.

“I have been up to my shoulder in a cow’s ass, and I kind of feel like that’s what is happening to us today,” Ruth said, as she handed out a glove to each of the supervisors.

The discussion was about more than gloves for supervisors, who’ve struggled to come up with a clear plan to manage permits for increasingly popular events at wineries and other rural sites.

Mecham lamented that the county may be at a tipping point, saying it’s time to hammer out more comprehensive guidelines for events.

Because the Pasolivo project complied with existing county guidelines, supervisors decided to approve the project after the applicant’s consultant Jamie Kirk agreed to scale back the number of events held at the property.

For similar projects in the pipeline, the barn door may be closing, but Pasolivo made it through.