Pasolivo's plans to expand have concerned some neighbors

About 7.5 miles up Vineyard Drive from Highway 46 West, through the rolling hills, oak trees, and sprawling grapevines, a short gravel road leads to a old white ranch house, an idyllic red barn, and a 45-acre olive orchard.

Now, plans to tear down the barn, expand the business, and host events on the property are causing a rumble in the Paso Robles countryside. Those plans have neighbors at odds with the business’s vision for the next chapter of the storied property’s history. 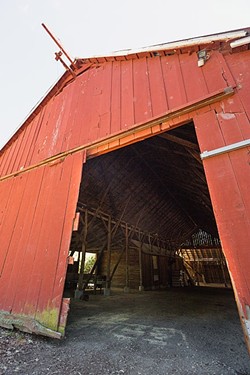 The barn is a relic from the days when dairy cows roamed the Adelaide hillsides, when the property was part of the larger Willow Creek Ranch. In 1946, the ranch was purchased by King Vidor—famed Hollywood producer, director, and actor, known for directing the black-and-white parts of The Wizard of Oz—who owned it until he died there in 1982. The property was parceled out, and one section went to Karen Guth. There, she started and operated the Pasolivo company until it was seized in 2009, after she and her son Jashua Yaguda were sent to prison for defrauding more than a 1,000 people in a ponzi scheme run through their lending company Estate Financial.

In late 2012, the Newport Beach-based Dirk family purchased the property, in part as an investment. The Dirks rejuvenated Pasolivo to a point where it couldn’t keep up with the demand for its products. They needed more room for processing olives and oil tasting. So in 2013, with the help of the prominent North County planning firm Kirk Consulting, they drew up and submitted an extensive application for a conditional use permit to upgrade and expand their facilities.

The tentative plan is to add two new buildings, one 2,600 square-feet and another 3,000; demolish and replace the 6,820 square-foot old wooden red barn; play host to up to 20 events a year with a maximum of 200 people; and receive and process olives from other producers. These plans—namely the barn’s demolition and the ensuing construction of a new structure that would be used in part for special events—aren’t OK with some of Pasolivo’s Vineyard Drive neighbors. Two different parties appealed the project, and now the final decision rests with the San Luis Obispo County Board of Supervisors on June 2.

Two couples who own separate, adjacent properties—and who met each other after the project’s permit was approved at an April 17 planning department hearing—are arguing that the barn’s removal would strip the area of a valuable historical landmark and that expansion of the facility will adversely impact the area by attracting more traffic and noise during events.

Hillary Trout, Pasolivo’s general manager, said that the plans are all consistent with the agricultural zoning of the area, however, and that the facilities must be updated to for Pasolivo to continue conducting its business.

Because the barn is rather dilapidated, Trout said, it can’t be used for olive oil production or for events, and rehabilitating the structure would be very costly. In Pasolivo’s case, it seems the sum of its parts is greater than the whole.

“The barn is important to us for the resources it provides, but as a structure it is very unsafe and has no value to us as a business,” Trout said. “I look at it, and the wood is the most valuable part.”

Trout plans to use the wood to make furniture and other décor, and reuse the sheet metal and other salvageable material.

But whether or not the materials are reused is irrelevant for concerned neighbors. Instead, the barn’s removal is symbolic of the larger expansion plans laid before them. Colleen Runyen—who with her husband Ron Jolliffe is building a home on a neighboring property they plan to retire on—disagrees with the notion that having events at Pasolivo is consistent with the land’s agricultural use.

“All of a sudden, to have 20 events next to me and the big beautiful barn come down,” Runyen, who used to work at Pasolivo, told New Times. “It’s disheartening for us; I think it’s the bigger picture of what’s happening, with all these event centers and everything that’s been approved on a two-lane road.”

But Jaime Kirk, owner of Kirk Consulting, said the plans are consistent with several other permits granted to wineries in that area, many of which she represented.

“Our county policies encourage visitor-serving uses and to market your property,” Kirk said, adding that a 200-person cap on events is accepted in that area, and is supported by a traffic study and other assessments conducted through the planning process.

“When we were going to ask for something, we decided that we would go in asking for the numbers that the county is comfortable with,” Kirk said.

The other appellants in the matter, Alec and Claudia Webster, lawyered up. Alec, whose parents live near Pasolivo, hired a Santa Cruz-based attorney, Alison Norton. Norton filed a temporary restraining order to stop the barn’s demolition, which will be heard at the Paso Robles branch of the San Luis Obispo Superior Court on June 3.

“This is [zoned] agricultural and residential, and they are essentially trying to turn it into commercial property,” Norton said. “It’s changing the entire nature of the neighborhood.”

But Trout argues that even though the business may be growing, Pasolivo is just doing more of the same.

“We’re not looking to be anything more than we already are,” Trout said.

The Websters and the applicants have clashed over the exact date the barn was built and whether it should be protected as a historical resource. At one point, neighbors were concerned that the permit was approved after the county planning department didn’t send out all of the required mailing notices for the initial January permit hearing. That issue was resolved after Kirk asked supervisors in March to have the department reconsider the permit with proper noticing. The permit was again approved by the planning department in April.

Kirk told New Times that the applicants are doing everything they can to ensure their plans are in line with county policies.

“Going in for these types of permits isn’t for the light hearted. They are very complicated, and it’s a lot of money,” Kirk said. “It’s a long complicated process, which it should be. The county should look at everything; the neighbors should give healthy input, which is going on right now.”

But underneath it all, Runyen is concerned that while Pasolivo may fit within the boundaries, the business-as-usual growth of the area may one day catch up to it.

“It may be that doesn’t have a big impact, but at some point there may be a threshold,” Runyen said.