View the food and drink menus for Hatch Rotisserie Bar at hatchpasorobles.com and Fish Gaucho at fishgaucho.com, both located in downtown Paso Robles. Find out more about SLO Bitter Co. and where to find these bottles (great for gifting) at slobitterco.com.

Think you know your significant other? Try to describe them as booze.

When I asked Robin Wolf, cocktail czar and manager at The Hatch Rotisserie and Bar in Paso Robles this question, she knew immediately.

"Matt? He's fernet. A little dark, a little moody, a little complex, even a little bitter sometimes, but just what you want at the end of the day," she mused. 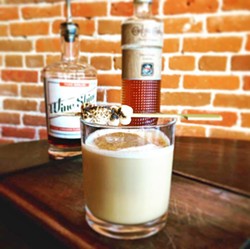 Wolf is one of those split personality types: Half herbaceous gin, half smoky, sultry whiskey. With her blazing red hair, love of the spotlight, and bold attitude, I wasn't surprised to hear her lean toward the latter.

"Fernet and whiskey do compliment each other: It's 'an industry sour,'" she said.

Yes, this is the kind of reply you'd expect from a seasoned mixologist who also happens to own her own bitters operation, SLO Bitter Company. Wolf's hubby, Matt Hanson, is proud general manager and bar director at Paso's own Fish Gaucho.

That means that, on any given work night, Wolf and Hanson can be found shaking, muddling, and straining sumptuous drinks just a few blocks from each other in downtown Paso Robles. Together, you could even say the couple is elevating the drink culture in this wine-centric town, although these theater aficionados are far too humble to admit it.

Hanson said it's a joy to stop by each other's workplaces, even if it can be hard to sneak a kiss during peak dinner service.

"I come by The Hatch at least once a day, and she's the only one there who doesn't say hi to me. If she gets done before me, which is rare, she'll stop by Fish Gaucho and grab a drink," he said. "With the restaurants in Paso Robles, we're all really friendly with our neighbors and more than happy to refer folks across the street."

So, how did these two talented mixologists end up so perfectly matched?

The story goes like this. The setting: Arroyo Grande High School. The actor: Hanson, performing in a school play. The way Wolf remembered it, "It was not love at first sight." She added, "OK. So I might have been a little rude to him."

I asked Hanson to recall that first magical meeting. His take on the story is classic: "She was talking to my brother. I went up to talk to him, and she basically looked at me and said, 'Who the hell are you?'"

Wolf admitted that the pair's "strong personalities" have been known to clash from time to time. But their connection and attraction is strong and authentic; coated in sugar, they are not. Their respect is mutual and their creativity bounding.

Plus, they still know how to shake things up.

For one thing, Hanson can always crank up show tunes from Man of La Mancha (Wolf finally fell for her dark glass of fernet when he played the lead roll in a high school production of the play).

"It was vomit-inducing cute," Wolf said of Hanson's singing. "Fast forward 18 years now, a decade in New York, and a bunch of growing up and learning about ourselves, and here we are."

Here we are indeed. Wolf skipped over the part where they got married in Las Vegas—by Elvis himself—some five years ago. The groom wore a Led Zeppelin T-shirt; the bride donned a wild leopard print dress.

The couple had moved to NYC to pursue the stage but found something else entirely: a creative food and drink scene bursting with possibilities. Barkeeps were shaking up golden era drinks—Sazeracs, Manhattans. It was an interesting time to dive into mixology.

When the couple returned to SLO County in 2011, Wolf threw herself into the local wine scene while her love landed a job whipping up drinks at Novo.

She went on to become certified by the Court of Master Sommeliers, although she eventually found that cocktails are truly her jam. Hanson helped build Fish Gaucho's offerings from the ground up, a source of pride.

"There was just so much diversity in the flavor and complexity and manipulating the product in the mixology world," Wolf said. "You get to make it your own. Being able to leave a creative imprint has always been a big deal to both of us."

The pair has even competed against each other during various epicurean events across the county, including a past Savor the Central Coast showdown. This kind of energy always brings a little passion and fire to the bar cart. Take notes, everyone.

"We spend a lot more time collaborating than competing, but when we do face off, it's fun. At home, we're working on our recipes and trying to make sure the other person doesn't see what we're doing and steal it," Hanson said with a laugh. "She actually provides a lot of inspiration for me, and I think I do the same for her."

Wolf added with a tone of reverence: "Matt is just awesome. When I beat him, I know I've done my best."

Stop by The Hatch or Fish Gaucho in Paso Robles and you'll see just how far each spouse has upped the ante in terms of flavor. Wolf tends to focus on whiskey drinks and incredibly seasonal ingredients and spirits—even pulling herbs from her boss's local property.

Hanson is also very focused on seasonal and local, with an emphasis on mescal and tequila.

The couple encourages everyday people like you and me to take this spirit of boozy creativity home, too. During the holidays, it's easy to get wrapped up in this idea of "perfection." The perfect dinner. The perfect cocktail. The perfect host or hostess. The perfect ugly sweater, even.

Wolf said this negative "have to" mentality—when and what you "have" to do—really kills the mood.

"We both come from big families. The holidays, for us, are all about inclusiveness and throwing the rules out the window. Don't forget where you are, what you're doing, and who you're with," she said.

For your mutual pleasure

Mix up the holidays with these sensational craft drinks, perfect for a winter soiree or just a chill date night huddled around a crackling fire.

Shake all ingredients (save ginger beer), strain into glass with ice. Top with ginger beer. Garnish with apple slice and cinnamon stick.

Molasses syrup: Mix equal parts molasses (available in the baking aisle) and hot water. Stir until dissolves and allow to cool. Try it in your coffee or iced tea. You'll thank me later!

Baby It's Cold Outside

Hayley Thomas Cain is enjoying a heavy holiday romance! She can be reached at hthomas@newtimesslo.com.