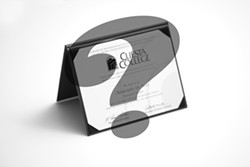 Two days after announcing they will scale back summer school this year, Cuesta College officials may have more bad news to report—that’s if accreditation regulators decide the college hasn’t made enough progress in key areas.

“We are a long, long ways away from losing accreditation,” Cuesta College Vice President of Academic Affairs Cathleen Greiner emphasized.

As of press time, though, the school had not received word from the Accrediting Commission for Community and Junior Colleges (ACCJC) as to whether it has made sufficient improvements in response to a warning from the organization in February 2009 that its standing was in jeopardy. A report from evaluators who visited the school in October is imminent.

ACCJC President Barbara Beno issued the warning, asking the college to correct deficiencies noted by an evaluation team
the previous October. A warning is the mildest possible sanction against an institution, and Cuesta remains a fully accredited institution, now and for the immediate future, regardless of the findings in the report.

“A warning is something we take very seriously and work to address as quickly as possible,” Cuesta spokesperson Jill Beck said. “But it’s important to say that at this point we are not at risk of losing accreditation.”

Now is no time to panic, school officials say; the commission may decide to remove the college from its warning. Should the ACCJC find Cuesta has not made sufficient progress regarding the nine recommendations of last year’s warning letter, however, the commission could bump the college down another notch in the sanction ladder, to a “continued warning” status. Beyond that, through a sequence of follow-up reports and evaluation team visits, an institution can be placed on formal probation before accreditation is ultimately terminated. In other words, it’s a lengthy process.

The 2009 warning letter lists nine broad recommendations. Those include more frequent reviews of the college’s mission statement; the creation of a strategic plan for better planning and resource allocation; an ongoing evaluation of library and technology resources; assessment of college governance structures and roles; and the assessment of Cuesta’s long-range financial and capital planning strategies.

ACCJC Vice President of Team Operations and Communication Jack Pond told New Times it would be “improper” to comment about Cuesta’s progress in these areas or the contents of the report before school officials had the chance to release it themselves.

Meanwhile, Cuesta officials remained optimistic.“Since the last report I’m confident we’ve made advancements in those areas,” Greiner said. “Also, with the new leadership here at Cuesta I think we have additional capacity now to address what the commission wants us to improve. We have a dedicated staff that really gets it, you know, in terms of planning and budgets. And that’s the crucial thing—to use effective planning to leverage our very scarce resources.”

Continuing the year with a warning may affect morale among administrators and faculty, but would have no bearing on the quality of education, said Steve Leone, president of Cuesta’s academic senate. According to Leone, “it just means we have more work to do.”

“I’m proud of our faculty for how we’ve worked campus-wide to bring areas up to standards and we will overcome the challenges presented to us by ACCJC, if any,” Leone said.

Off the record, though, several faculty and administrators shared their doubts that the college has made enough improvements to satisfy the commission this time around.

According to Cuesta’s accreditation steering committee and the Shared Governance Council’s meeting transcripts, some administrators and faculty are documented to have voiced criticism over the broad language used in the ACCJC recommendations, and perceived biases on the part of the visiting evaluation team members. Others questioned how they are to effectively plan to ensure sufficient funding for ongoing operations given the economic downturn and the shakiness of the state budget.

Last year’s warning notice was the first for the college in the current accreditation cycle, which began in 2008. The upside is there is no set deadline to correct what the commission sees as deficiencies, so long as Cuesta continues to show progress in implementing the ACCJC recommendations.

Cuesta was not the only institution placed on warning in Jan. 2009 by the ACCJC. Five others—including El Camino College in Torrance, Long Beach City College, Rio Hondo College in Los Angeles, and Santa Ana College and Santiago Canyon College in Orange County—are in the same boat, and others are already on continued warning and probation.

Under U.S. Department of Education regulations, institutions on sanction are expected to show progress in correcting the shortcomings within a two-year period or the ACCJC must terminate their accreditation. If not, the Western Association of Schools and Colleges (WASC) risks loosing its own mandate as an accrediting agency.

Though information for 2009 is not yet available, in the 2007-08 school year, the average cost to a community or junior college per full-time equivalent student was $5,891, according to Patrick Murphy of the Public Policy Institute of California. Of that figure, an average of only 4.1 percent—or $242—is covered through student fees, leaving a major dependence on state and local funding for operational budgets.

On Feb. 2, in response to the projected 2010-11 state budget and the elimination of federal stimulus funding, Cuesta announced it would not offer regular summer semester courses this year, a move which could have an impact on the accreditation process. What that impact may be is uncertain.

Cuesta interim president Gil Stork could not be reached for comment as of press time.

College officials also cited near-record enrollment, which has pushed the college’s full-time equivalent student number above the state’s funding cap, as a reason for the elimination of summer school. According to a press release, the college currently has approximately 400 full-time equivalent students for which they receive no funding other than fees.

California community colleges, with their historically low tuition, have been especially hard-hit by state cutbacks. But California could be just the start. Community colleges across the country are being faced with a double-whammy of scaled-back state funding and steadily increasing enrollment, suggesting the problem of maintaining accreditation may spread as institutions find they can’t afford the staff and manpower to maintain operations while producing mandatory self-assessment reports.

According to a Dec. 2009 report by the California Postsecondary Education Commission, community colleges across the state currently serve almost 3 million students annually. By fall 2011, the system is expected to see for the first time enrollment of over 2 million students for the fall term, and if reduced funding forces these institutions to reduce enrollment, by fall 2010 up to 365,000 prospective students could be denied access to a community college education.