Passing along the magic!

Imagine you were an insider working with ex-Beatle Paul McCartney during his Wings period. You had the world by the tail, winning a Grammy for “Rockestra Theme” from the Back to the Egg album and tour. Would you give it up to pursue other endeavors or stick with the fame machine? 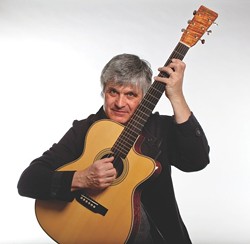 Before you answer, maybe you should know that you’re a self-taught guitarist who worked out the music notation system on your own as a child, and that by 13, you were playing guitar for money. You were studying—and mastering—classical guitar at 15, and after earning a music degree at the University of London, you began a lucrative career as a session player, all the while expanding your abilities, like learning to play the lute, but you gave that career up to join Wings.

At this point, maybe you’re thinking, this guy’s a quitter! He can’t decide what he wants to do! But to me, “this guy”—aka Laurence Juber—is a rolling stone that gathers no moss.

After Wings disbanded, he moved to the United States, met his wife, went to Hollywood, and played on TV show soundtracks such as Happy Days and Family Ties, played the theme music for the Bond film The Spy Who Loved Me, started recording solo albums, and won a second Grammy for Best Pop Instrumental for his arrangement of the Pink Panther theme. He’s since recorded 19 solo albums, most recently LJ Plays The Beatles: Vol. 2.

Now Laurence Juber is coming to the area to play a benefit concert for a cause near and dear to his heart, Guitars in the Classroom, on Thursday, Nov. 8, at the Monday Club in SLO Town. The doors open at 6 p.m. with a silent auction. The concert runs from 7 to 9 p.m., with an intermission from 7:50 to 8:15 p.m. There will be wine tasting and a meet-and-greet reception with Juber at 9:15. Very limited premium tickets are $45 each, with some general admission tickets available for $30, online at vallitix.com or infinitemusicfoundation.org, by phone at 1-888-825-5484, or at Boo Boo Records.

There’s also a guitar workshop with Juber at Lightning Joe’s Guitar Heaven in Arroyo Grande on Wednesday, Nov. 7, from 7 to 9 p.m. for $25. Any tickets that remain after the pre-sales will be available at the door of the workshop or concert for an additional $5 service charge.

Guitars in the Classroom is a nonprofit that “seeks to train and equip classroom teachers in order to integrate singing and playing guitar into the daily school experience of schoolchildren. It currently operates grassroots programs in 30 states,” according to the organization.

Come out and see a great concert and support an important cause.

And while we’re on the subject of helping kids …

Juber’s not the only storied musician playing a benefit concert for children for the week. Harry Manx is also doing a fundraiser for School Music Programs on Tuesday, Nov. 6, at La Bellasera (206 Alexa Ct., Paso Robles), with doors opening at 6:30 p.m. followed by a 7 p.m. concert sponsored by Matt’s Music and Hampton Inn & Suites ($20 tickets available at Matt’s Music or by calling 237-0054). 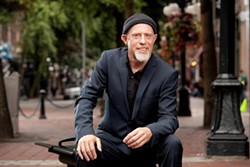 Manx plays a crazy 20-string combination guitar and sitar, and his skill on the instrument has made him an international recording and performing artist and Juno Award nominee. You’d be hard-pressed to find a more talented and original folk-world-blues performer.

He also plays lap slide guitar, blues harp, and the six-string banjo, but most unique is the Mohan Veena, his guitar/sitar hybrid. His music has been called the “essential link” between the music of the East and the West, “blending the tradition of the blues with the depth of classical Indian ragas.”

He’s also known to share stories from his amazing life, like this recent one from his show in New York: “I played at the NYC Guitar Festival tribute concert for Bruce Springsteen, and he was there sitting in the front row listening to me do his song ‘I’m On Fire’ (on the cigar box guitar). I also did an instrumental on the Mohan Veena. After my set, he came backstage with his wife and said, ‘Beautiful man, just beautiful. ... I feel like I discovered something new tonight, great version of ‘I’m On Fire.’ For the last tune that night, I got on stage with him and some other musicians and we played a Woody Guthrie song. Later at the after party he wanted to know more about me and my instruments. We talked for a while about playing solo vs. having a band and how I came to learn Indian music. Definitely one of the highlights for me. I was totally Bruce’d out!”

Get ’em while they’re hot!

I’m pretty sure SLO Brew is going to survive well into the future, but you can read this week’s cover story about the kerfuffle surrounding its proposed move to Higuera Street in 2015 on page 18. However, just in case SLO Brew is a few short years from being gone for good, there’s no time like the present to attend one of its shows. This week, for instance, there’re three: one proving there’s life after rock, another that there’s opera after punk, and a final show proving that a great voice and great tunes are all you ever need.

It all starts with ex-L.A.-rocker-turned-world-beat master David Lindley on Saturday, Nov. 3 (7 pm.; 21-and-older; $22 presale or $25 at the door), with Markus James with Arsene Kounde opening. Multi-instrumentalist David Lindley started by accompanying Jackson Browne before leading his own band El Rayo-X, but he soon began to explore and champion world music. 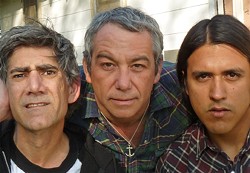 Add in his incredible voice and offbeat sense of humor and you’ve got the makings for a terrific show. For the uninitiated, this is a sight to behold. Those in the know realize you never get tired of seeing this guy, and you never know what he’ll do next.

I’m also pretty excited about the show on Tuesday, Nov. 6, when Mike Watt & The Missing Men (8 p.m.; all ages; $10 presale or $12 at the door) hit the SLO Brew stage. Best known as bassist for The Minutemen and fIREHOSE, Watt’s solo career has been rich with collaboration, including playing with Henry Rollins, Eddie Vedder, Frank Black, Nirvana, Jane’s Addiction, Sonic Youth, Evan Dando, the Red Hot Chili Peppers, the Beastie Boys, and more. His current incarnation—with Spiel raul Morales on drums  and Tom Watson on guitar—recorded his most recent effort, Hyphenated-Man, his fourth solo album and third in a series of rock operas following 1997’s Contemplating the Engine Room and 2004’s Secondman’s Middle Stand.

“Whereas Engine Room dealt with my pop’s life in the Navy as a metaphor for the story of the Minutemen,” Watt explained in press materials, “and Middle Stand was a parallel to Dante's Comedia dealing with an illness that almost killed me in 2000, this third opera is quite different in that it has no standard narrative (libretto!), meaning no regular beginning-middle-end and is as it were ‘simultaneous’ in the way a mirror from just inside my head—right in this middle-age moment of mine—was then shattered into 30 pieces and then each piece stuffed in the head to show a piece of my state of mind (or out-of-mind) as of now. ‘Thirty tunes?’ Yes, they’re little ones ... actually they’re ‘30 parts’ of one big tune.”

Ah, an artist in full bloom! This album’s like a machinegun shooting fun nuggets!

On Wednesday, Nov. 7, the vocal power and prowess of Tyrone Wells will be on display (8 p.m.; all ages; $14 presale or $16 at the door), with New Times Music Awards multi-winner Emily Wryn opening. Wells is touring in support of Where We Meet, filled with the singer’s wistful serenades and Spartan tunes. This is gorgeous, honest music from a powerful singer and entertainer.

“I’ve been told that I should sell a box of tissues with the album!” Mann said. “All of the songs were inspired by people that I have met and I was moved to tell their stories.”

Mr. Kind comes to Kreuzberg on Tuesday, Nov. 6 (6:30 p.m.; all ages; pass the hat). According to their press materials, “Founded with the collaborative spirit of Wilco, the confessional sincerity of Ryan Adams, and the dynamic folk sound of Arcade Fire, Mr. Kind is four guys who are way too nice to each other. The Oakland-based band is touring with a new five-song EP called OK. They’ll be joined by Austin-based touring artists Shawnee Kilgore and Daisy O’Connor, plus L.A.-based writers Lee Madeloni and Martin Purtill.

Finally, on Wednesday, Nov. 7, head to Upper Crust Trattoria in SLO to hear The Vespers (7 p.m.; all ages; $10). The band features two singing sisters and two brothers, and their folk-pop album The Fourth Wall has won fans far and wide. Connie Lim will open.

Celtic trio Mason-Raney-Weed plays the Steynberg Gallery at 7:30 p.m. on Thursday, Nov. 1, for $15. Featuring Stuart Mason, Colleen Raney, and John Weed, the group delivers authentic traditional Irish and Scottish music with a rich repertoire of uplifting dance tunes and heart-tugging ballads. Mason and Weed are members of Molly’s Revenge, and Raney has been called one of the best Celtic singers of her generation.

(Insert Italian accent here) Hey, it’s the Paisanos! They’re back at the Frog and Peach to play Farmers Market night on Thursday, Nov. 1. The guys say they’ve “been itching to get back on the stage there; and most of them don’t even have fleas!”

Awesome ’60s cover act Unfinished Business plays D’Anbino Tasting Room on Friday, Nov. 2, at 8 p.m., delivering an evening of music from The Animals to The Zombies and including The Beatles, The Beach Boys, The Rolling Stones, and various soul artists. Who doesn’t love the ’60s rock era? Admission is $10 ($5 for Record Club members).

Guitar and mandolin duo Dorian Michael and Kenny Blackwell will be joined by Louie Ortega on guitar and Paul Olguin on bass on Saturday, Nov. 3, at the Red Barn in Los Osos. From traditional bluegrass to improvisational blues and Tex-Mex roots rock, this group will provide a rare treat to fans of the monthly Red Barn Series. The doors open at 4:30 p.m., and there’s a 5 p.m. potluck. The concert starts at 6. A $10 donation is requested.

Painted Sky brings you another concert in its intimate space when Celtic music legend Paddy Keenan plays on Saturday, Nov. 3, at 8 p.m. “This man is the real deal,” said proprietor Steve Crimmel. “There is nothing quite like sitting in a room and hearing uilleann pipes being played live. Recordings can’t even come close to capturing the magic of their sound. This is Paddy's third West Coast Tour that will feature a performance at Painted Sky Studios. Generally acknowledged as the most accomplished uilleann piper performing today, Paddy is certainly one of the most brilliant musicians of his generation. He can rightfully claim his place alongside such open-style legends as pipers John Cash and Johnny Doran.” Tickets are $20, available at Cambria Business Center, Boo Boo Records, or by calling 927-8330. If not sold out, tickets will be available at the door.

Also join “A Celebration of Rhythm and Art, a Drums and Disabilities Fundraiser” on Sunday, Nov. 4, from 3 to 5 p.m. in D’Anbino Tasting Room. “Come enjoy some food, wine, music, and art as Tom Mears, a certified drum therapist and drum educator with the Drums and Disabilities program, will perform his solo drumming compositions while local artist Kathleen McCollum puts brush to canvas, painting to the rhythm of the drums, plus additional entertainment by belly dancers from the Blue Moon Haven belly dance troupe,” said Carmine Rubino. This event is free, but your $10 suggested donation benefits the drum program.

Later on Sunday, Nov. 4, D’Anbino is host to Vocalogy at 7:30 p.m. This vocal jazz quintet brings “an exciting and distinctive sound to the world of vocal music.” They’ve played festivals, concerts, clinics, and clubs since 1998. Expect intricate and vocally demanding arrangements. Admission is $10 ($5 for Record Club members).