The work of computer technician-turned-artist Steven Boothe and the premise of Peter Lovenheim’s book In the Neighborhood have so much in common, it’s a relief they found each other: Boothe’s photography exhibit “found in passing” is currently on display at Cal Poly’s Kennedy Library, in conjunction with Lovenheim’s In the Neighborhood being named the 2012 Cuesta College Book of the Year. 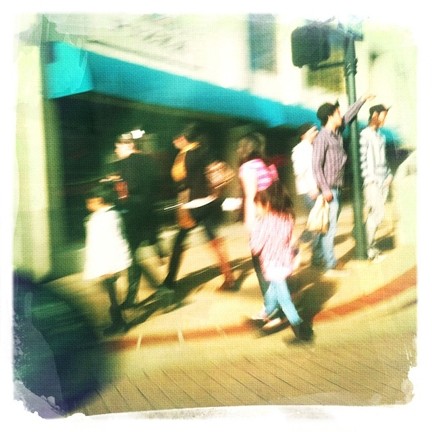 “found in passing” features 150 scenes from San Luis Obispo neighborhoods. Some are mere glances, seemingly shot at random. They are often blurred, like Impressionist paintings, or childhood memories. We see the changing landscape of a street corner, a young man waving to someone on the other side. Other photographs are clearer and more deliberate: the smiling face of a loved one, or a snapshot of a child on a tricycle.

“Who are we?” Boothe’s artist’s statement inquires. “What is a neighborhood? If we went looking, where would we start? Where would we search? How do we respond when we find one? Do we engage? Do we involve ourselves with others? … Is there any difference between a neighbor and an occupant?”

“found in passing,” which hangs in the Kennedy Library’s second floor gallery through Feb. 24, is the perfect tribute to a work like Lovenheim’s In the Neighborhood, one that chronicles, as the book’s subhead reads, the author’s “search for community on an American street, one sleepover at a time.”

In keeping with the book’s theme, the subject of neighbors, neighborhoods, and community will be explored in a week of cultural activities, discussions, and workshops surrounding Lovenheim’s lecture at Cuesta’s CPAC on Tuesday, March 27.

For more on the Cuesta College Book of the Year, visit library.cuesta.edu/book. For more on Boothe, visit boothefam.com.