About six years ago, California native artist Erin Hanson couldn’t even tell you where Paso Robles was on a map. Today, she’s painted 300 landscapes of the agrarian (and steadily becoming trendy) town’s rolling hills and sprawling vineyards.

She first laid eyes on the oak-filled hamlet during a Valentine’s Day weekend getaway with her boyfriend and found herself falling in love with the area, which was lush from recent spring rains and seemed enchanted with the fog and early morning light.

“It was really green and I saw these perfect circle hills overlapping with these perfect round oak trees,” Hanson said. “It was like a fairy land.”

A week later, Hanson was back in Paso for a road trip in her van, snapping tons of photos as inspiration for oil paintings. She figured she’d road trip along the coast, but at the end of her seven-day trip, she found herself still stuck in Paso. The love of her Central Coast muse has brought Hanson to exhibit her work at Studios on the Park for the past five years. This year’s exhibit, Impressions of California, features around 40 dreamy, impressionistic paintings inspired by Paso Robles, Joshua Tree, the Sierras, and beyond. Hanson describes her work as open impressionistic. It’s a little abstract with vibrant colors and rapid brush strokes that replicate movement.

When it comes to the Central Coast, Hanson said she’s drawn to the natural contrast found in the landscape. 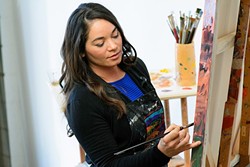 Hanson began painting at age 7 (her first favorite painting was Irises by Van Gogh), worked in a mural studio as a teen where she helped paint giant murals that would hang at casinos and on cruise ships, and she graduated high school early and started attending UC Berkeley at the age of 16.

“I always treated art as a discipline as well as a way to express myself,” Hanson said.

Still, in spite of early leanings toward a creative career, Hanson found herself graduating with a degree in bioengineering after too many people told her that it was too hard to eke a living as an artist. But the switch didn’t quite take.

“I found that bioengineering is really fun to study, but what you have to do to be a professional is kind of repetitive and boring,” Hanson said.

After graduation, she ran her own business leasing out storage units and working in imports and exports. The steady cash flow allowed Hanson to focus on her painting without worrying about the bills. About four years later, Hanson was able to sell the business and pursue art full time.

While the Los Angeles area artist visits Paso several times a year, the muse of the Central Coast still shows up time and time again to inspire creativity in Hanson.

“Now that I know the lay of the land and the different roads and vineyards, I try to capture them in different lights and seasons,” Hanson said.