If you've never had a Brazilian honey cake, or if you're a transplant missing home, make a beeline for your local farmers' market.

Vanessa Higgins, originally from Brasilia, and Carina Lahmeyer, from Niteroi, have perfected their country's traditional pão de mel recipe, creating a "killer combination of ingredients in one small bite," according to customer Gabbi Banducci, a San Luis Obispo resident hailing from Curitiba. 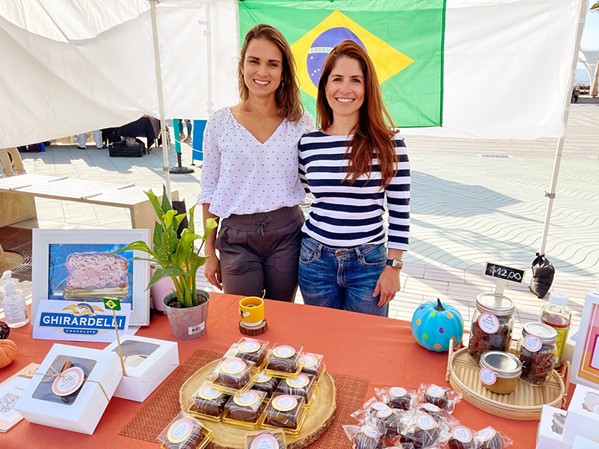 "We wanted to bring something different to SLO and connect with our culture," said Higgins, who, along with Lahmeyer, moved to San Luis Obispo two years ago. "We tried a few recipes until we got it right for us and our customers.

"We use a good-quality baking chocolate from Ghirardelli. We chose to use dark chocolate to balance the sweetness of the doce de leite [caramelized milk]. The spices and honey in our cake batter make the texture soft and fluffy. The ingredients all combine to make a super delicious honey cake."

The friends and business partners launched a cottage food operation in March, initially selling to friends, then later this year branched out to farmers' markets and pop-up locations throughout the Central Coast as news of their sweet treats spread.

"We chose the name Honey Bee SLO to refer to the place where we live and love," Lahmeyer said. "When we have the opportunity to sell our cakes statewide, everyone will know that we make them here in this special place we call home."

Banducci was thrilled when "a dear friend found out about this business, and bought some honey cakes for me, knowing they were homemade by Brazilians. She nailed it on the head with that gift.

"I buy [their product] at least once a month, either for myself or as gifts for friends and family. Everyone that has received those cakes has loved them."

Banducci adds that she is deeply thankful for Higgins and Lahmeyer—providing Brazilians with a taste of home, while "bringing something new to this great place called the Central Coast."

Another regular customer, Reese Galindo of SLO, isn't Brazilian, but she's a huge fan, purchasing the sweet treats for afternoon pick-me-ups as well as for milestones such as birthdays and graduations.

"Honey Bee SLO honey cakes are an outstanding addition to the culinary scene here in SLO," she said. "Some of the ingredients remind me of my own Filipino heritage.

"There is a wonderful balance of the caramel and the subtle cinnamon flavor of the cake. Then, the dark chocolate brings it all together perfectly. Pair that with a cup of coffee, and nothing beats a honey cake for merienda."

In March, the duo was producing 60 honey cakes per week, "and now we're up to 300, depending on our event schedule," according to Lahmeyer.

Both women have full plates—raising young children, volunteering at school, and, in Lahmeyer's case, holding down a part-time retail job linked to architecture.

Lahmeyer is a trained architect, while Higgins holds a master's degree in business administration.

Cooking, however, is part of their culture and remains their passion.

"I come from a large family where potluck get-togethers are the norm," Lahmeyer said. "Everyone is responsible to bring at least one dish. So cooking has always been both a necessity and a passion for [me]."

Higgins, meanwhile, travels to explore new cuisine, and "remembers learning how to bake cakes with my dad when I was just 10 years old," she said.

Fate brought Lahmeyer and Higgins together one day at SLO's Sinsheimer Park.

"I was playing tennis, and my husband was watching our boys," Higgins said. "He heard Carina speaking in Portuguese on the playground and introduced himself and the kids. We became friends before business partners.

"Our Brazilian community here in SLO County is close. We have barbecues, celebrate birthdays, support each other's businesses, and play soccer on Sundays."

At Honey Bee SLO, the partners "share baking responsibility, weekly purchasing, social media, deliveries, and most of the time we're both running the table at our events," said Lahmeyer. "We're busy bees."

"I started following social media accounts of Brazilians in the United States making pão de mel," she said. "I made a batch for myself but messed up the measurements. I'm used to the metric system. I got it right enough on the second try to share with my ocal Brazilian friends. Everyone seemed to like them, so we got up the courage to make some for Valentine's Day and share them with teachers at our children's school.

"Based on the feedback, three of us Brazilian moms designed a brand and started selling. One of us decided to focus on other things, but we remain close friends, and Carina and I kept the business going," Higgins continued.

"A special tip from Brazil—eat doce de leite with a spoon," Lahmeyer added. "You won't regret it."

Higgins said they want to expand the menu of honey cake flavors to include things like passion fruit and coconut and are currently working on a pumpkin flavor for the fall.

"We also want to experiment with other uses for our unique cake batter. It can be used in anything from full-size cakes to Belgian-style street waffles. I'd also like to develop an ice cream flavor and/or a sundae," Higgins said.

"I'd love to one day open a Brazilian-style bakery, or padaria, selling savory products as well as sweets and also imported Brazilian products," Higgins said. "In Brazil, the padaria is your one-stop shop and neighborhood gathering spot."

In the meantime, the duo invites customers to track their activity or place direct orders via their website or social media accounts. Custom requests are gladly accepted.

Give them a try, urge customers Banducci and Galindo.

"Vanessa and Carina are amazing folks—really warm with their communications, and they deliver the highest quality confections," Galindo said. "It is so wonderful to be able to support a local business, but I feel like we're the real winners, because we get the opportunity to share such a delicious part of their culture." Δ