Sitting in the corner, at the edge of the bright red ring, is Julia Perez. It’s where she feels most comfortable speaking with New Times about her favorite sport. Perez is a lean, muscular female who is full of warm smiles and recently won her fourth championship in amateur Muay Thai fighting.

There are many reasons why Perez enjoys defending her championship titles in the ring, one of them being she’s a natural competitor. 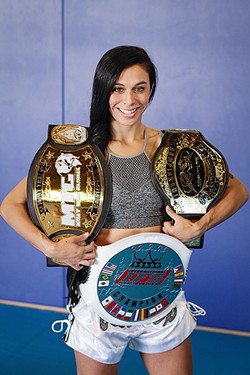 “I’ve always been pretty competitive, I played competitive soccer, I was on a club soccer team, I played varsity as a freshman, and I played in a women’s league,” she said.

“So I said, ‘Muay Thai? I don’t know what that is,’ so I looked it up and went in on a Saturday, and I just never stopped going,” Perez said.

Albert Malatamban is the owner and teacher of the academy that Perez walked into. He practiced martial arts at the age of 12 in the early ’70s and began his Muay Thai practice in the ’90s. Malatamban laughs about the first time that he met Perez.

Perez said that Muay Thai was difficult at first as it has different fight stances, movements, and positions than her previous fighting experiences.

But that didn’t stop her from embracing the new sport and wanting to learn more about its teachings.

“It definitely wasn’t discouraging to me. It felt like when I was a white belt in karate, which was my favorite time because it was like a blank slate,” she said.

Malatamban said he liked Perez as a student because she really listened to the new movements she was learning and focused on her training.

“She trains hard for every fight she has, just like any other fighter,” he said.

He started teaching the art of Muay Thai in the San Luis Obispo area in 1998 and speaks passionately about how the sport is all about movements and highlights the spiritual emphasis that is incorporated into every part of the sport.

Before the fight, the fighter wears a colorful cloth crown and exercises ram muay—a dance ritual that is also a warm-up exercise for the fighter. After the ritual, the teacher takes the crown off the fighter after a short prayer, and he or she is ready to fight.

Muay Thai has been an art that Perez has found best emphasizes her skills, but it’s more than just a sport, it’s also an outlet.

Perez is a single mother who works in the finance department at Cal Poly—with her not-so-average sporting passion on the side. Around the time of her daughter’s birth, Perez said that she lacked the emotional support to raise her daughter, finish school, and start her career.

She’s now found strength and new family members in the Muay Thai community. The sport is her passion and is something she’s constantly refining with Malatamban and her conditioning coach Ryan Joiner of Athlon Elite. She juggles that with having a 9-to-5 job and watching her 14-year-old daughter continue to grow.

“What keeps me going back in there [the ring] time and time again is coming from a place of feeling very small and helpless to a position of strength and power. I think that inspires me every day, and I think that’s what I constantly crave,” she said.

Oceano Elementary School has been nationally recognized by the League of American Bicyclists as the first school in the United States to achieve its Gold Level Bicycle Friendly Business Award. The school emphasizes a biking community by having bike to school days, a bike club, and maintenance instruction, among other activities. The school also gives back by raising money for World Bike Relief and Ride to Recovery. Keep on cycling on, kids!