Past due utility bills pile up throughout SLO County

A number of cities in SLO County are still waiving the penalties and fees normally charged to those who fail to pay their water and sewer utility bills. In some local cities, the past due payments are piling up, and it's still unclear whether customers will be expected to pay off their debts. 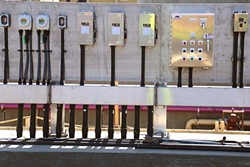 Like most cities in the county, Morro Bay City Council voted to waive late fees and suspend service disconnections in 2020 to aid residents struggling financially as a result of COVID-19 shutdowns and safety measures. The city hasn't issued a late fee since then, according to City Manager Scott Collins, and by the end of March 2021, roughly 353 Morro Bay utility customers had incurred a total of about $246,070 in past due payments.

Collins said that dollar amount has declined slowly from its peak of a little less than $400,000 over the last few months as safety restrictions have been relaxed and businesses have reopened.

"The fact that people who had fallen behind are making payments now is a good sign," Collins told New Times.

But it's still not clear how Morro Bay and other cities like it will recover those lost costs, if at all. While utility customers will not be required to pay back waived late fees, they could at some point be required to pay past due bills. Collins said Morro Bay staff are researching the $1.9 trillion American Rescue Plan Act and other legislation that could help cities recover revenue losses without making residents pay their past due bills. While there is a lot of clear effort to help those with unpaid rent and mortgage bills, it's not entirely clear yet where utility assistance comes into play.

But the pandemic isn't over, Collins said, and while some residents and industries appear to be rebounding, others aren't.

"So we're trying to be cognizant of that as well," he said.

Paso Robles usually receives around $200,000 in late utility fees each year, according to Administrative Services Director Ryan Cornell. But Paso also waived late fees during the pandemic and continues to do so, leading to a loss of that usual revenue and around $385,000 in past due balances on 642 accounts.

San Luis Obispo's utility customers have racked up around $309,000 worth of late fees since March 2020, according to Utilities Business Manager Jennifer Thompson. The city waived about $52,000 of that total as part of its COVID-19 assistance program, which waives four late charges per customer a year. The rest of that money, Thompson said, will have to be paid back.

Legislative efforts at the state level could help Californians pay off past due bills, including Senate Bill 222, which would offer payment assistance to low-income water customers. But that remains to be seen. For now, Thompson said the city is hoping to set up payment plans with all its indebted customers.

"All late charges incurred since March 2020 will be waived for any customer that sets up a payment plan and pays off their past due balance by Sept. 15, 2021," she wrote in an email to New Times. "The hope is that the new payment plan program will help customers catch up on past due balances." Δ