Local veteran winemakers weather all manner of elements with resolve

Last week, local newspapers warned that inclement weather could "severely damage" the winegrape crop, and they quoted a veteran winemaker in Santa Ynez Valley who described it as 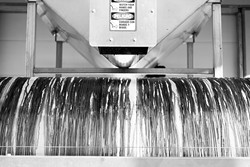 # every winemaker's "worst nightmare." I feared that ill-informed readers would think local wineries needn't bother harvesting grapes this year. Of course, the storm turned out to be only a sprinkle, and that was in just a few areas in SLO County, which made the storm-watch reports and my concern all the more laughable.

At this time of year, newspapers rarely report the whole story. They focus on the threat, which reflects badly on the wines made that vintage, so I wanted to clarify a few things. Storms dumping heavy rainfall, admittedly, would cause problems. But I'm a native Californian and I can't remember any major rainstorms occurring in early fall. When flooding from El Ni"o happened in the spring of 1998, it wreaked havoc in northern Santa Barbara County, closing down Foxen Canyon Road and causing major damage in many vineyards. Yet that year, like every year, some winemakers made inferior wines and some made great wines. So if you remember anything, remember this: Light rains during the harvest don't indicate an inferior vintage across the board.

I visited Baileyana, Ortman, and Per Bacco at the time and discovered they'd already harvested some or all of their Pinot Noir, a thin-skinned variety that's sensitive to problems. Paul Wilkins, co-owner of Alta Maria and consulting winemaker for other artisanal brands such as Hug Cellars, Native9, and Per Bacco, explained that a light rain would quickly be taken up because it's been such a dry year.

"One to two inches of rain can permeate to the root system and a cause a rebound, but it's not much of a concern," said Wilkins, a winemaker I can always trust to be candid (quite a few winemakers provide honest reports but insist on staying off the record). "More rain is a real threat to anyone normally facing mold and fungus pressure. Pinot Noir is particularly sensitive to mold."

Wineries in cooler climates like the Edna, Arroyo Grande, and Santa Maria valleys face those issues annually. But winemakers in those regions are prepared for dealing with such situations, and so far I haven't heard of any problems.

"The ideal cycle is a warm period at the end of August to increase the sugar levels [in the grapes] and being able to plateau and come into a cool period where the crop can rest a few days to mature before harvesting," Wilkins explained. "But a heat spike can cause grapes to rapidly mature. We have a very small window of opportunity to get the grapes in at exactly the right time. It requires patience."

Most Central Coast winemakers had barely begun harvesting grapes when this year's storm warnings threatened, and I heard of some less-experienced winemakers who panicked and called for an immediate harvest. But if they pick the winegrapes before they've reached optimum ripeness levels, they'll end up with below average wines. Winemakers like Wilkins who have lived through the variations of more than a few seasons remained impressively calm and pragmatic. In fact, he and several other winemakers told me they're just waiting for the Indian summer that always occurs on the Central Coast to bring the grapes up to sugar levels (brix) ripe enough to harvest.

The day the storm was supposed to hit, I stood in the sunshine with winemaker Christian Roguenant at Baileyana in Edna Valley. A 26-year veteran who's spent 21 years making wine on the Central Coast, he said he had only harvested 30 percent of their grapes so far. He noted that the cooler growing season meant fewer grapes on the vines and that California was down about 20 percent overall this year.

"We've had cool weather and freezing temperatures here, but there were less problems with insects and diseases so the vineyards were in good sanitary conditions," Roguenant explained. "It's a good year, and the fruit has good flavor."

We tasted some of the Firepeak Vineyard Pinot Gris and Pinot Noir he'd already harvested, and it was clear the wines had great color and delicious fruit flavors.

"Flavor-wise, we're ahead of last year. We have the best colors we've seen in a long time," Hansen said about the payoffs of a cool but longer growing season. "It could be quite a good vintage. The only negative is that there's not enough."

The passionate Rhone wine producers of Paso Robles are asking wine aficionados a few intriguing questions: Do you wonder what it takes to produce a really good Syrah? Is Viognier your new favorite white wine? And would you relish an opportunity to taste more than 100 Rhone wines from Paso Robles' Rhone wine specialists?

They're hoping for an emphatic yes from 100 wine lovers who will spend 14 hours with them tasting white and red Rhone wines, feasting on Rhone wine-friendly meals, attending educational seminars in the vineyards, and enjoying one-on-one conversations with the people behind the brands.

Jason Haas, general manager of Tablas Creek and head of the Paso Robles Chapter of the Rhone Rangers, started the new local chapter this year. While attending the Rhone Rangers annual tasting in San Francisco, which attracts thousands, Haas discovered that many consumers thought the Rhone producers were centered there. Haas wanted to beam the spotlight in on the Central Coast because it's the center of Rhone wine production in the United States.

"Paso Robles has 80 producers who make at least one Rhone wine," he explained during a phone call. "I'm hoping this event will bring in people who aren't familiar with Paso Robles' Rhone wine producers."

The event takes place Oct. 6, with an early start at 8:30 a.m. Guests will be transported by buses to each venue. The Rhone Rangers have arranged for blocks of hotel rooms to be available Oct. 5 and 6 at various price ranges for attendees who live outside of Paso Robles. This celebration of Rhone wines costs $215 per person and it's limited to the first 100 RSVPs. To reserve your spot and/or ask questions, call Tablas Creek winery at 237-1231, Ext. 39, or e-mail pasorobles@rhonerangers.org.