Adrienne Allebe will attend a closing reception for her show Forms Adrift this Saturday, Oct. 3, from 3 to 5 p.m., in Ascendo (1230 Los Osos Valley Road, Los Osos). "A socially distanced, masked closing reception will be held, and the artist would love to hear your interpretations of her work over coffee and light refreshments at this event," her press materials note. "If you're lucky, she might even do an interpretive dance for you." Learn more at facebook.com/allebe.

Two-dimensional images don't move, but there's something kinetic about Adrienne Allebe's paintings/drawings, which seem to dance over the surface of the paper or panel upon which she works. Featuring geometric patterns, graceful color graduations, and painterly and organic additions, her work will be leaving Ascendo in Los Osos after a socially distanced, masked closing reception on Oct. 3 from 3 to 5 p.m.

The former Cuesta and Cal Poly art instructor now has a tenure-track professorship in the department of Fine Arts at Allan Hancock College, where she's teaching remotely due to the pandemic. 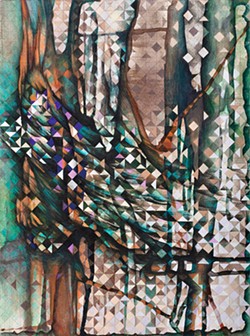 "I'm currently teaching online versions of life drawing out of my garage, color theory out of my bedroom, and ancient art history out of my kitchen," Allebe explained via email, noting she got her first teaching experience in Los Angeles "by demonstrating for friends how to draw She-Ra during recess! Ha-ha!"

The works on display represent a series she began in 2013, including three new works she completed this summer. What is it about patterns that she finds so fascinating?

"For my first seven years of teaching, I taught mostly two-dimensional design, which has traditionally been rooted in geometry and relies on precise measurements and craft," she explained. "Teaching that and being in design mode all of the time made me more interested in those kinds of shapes and artistic strategies—I had been making biomorphically surreal paintings for a while and always loved biological and anatomical forms for inspiration.

"I think I just felt that need to expand and open up as an artist, [I] wanted to start mixing it up. This, combined with my father's death in 2010, led me toward craving a more grounding artistic practice," she continued. "When difficult to concentrate, I found just sitting down with a ruler and developing a complex pattern to be very predictable and comforting."

Allebe—who attended Morro Bay High School, received an AA from Cuesta, earned a BA in painting and an art history minor from UCSB and received her MFA in illustration from CSU Long Beach—also studied biomedical illustration, which may account for the tiny worlds that seem to emerge from her work. She'll add "drips, splatters, pours, washes" to her patterns, which bring out "unexpected imagery" that she then elaborates on.

"I had never felt like my art was spiritual per se until I started making complex geometric patterns," she continued. "I started looking at and getting inspired by artistic traditions from around the world that also utilize pattern, and it made me feel connected to this kind of universal force," she said.

"I think in a way art making for me is always trying to find a way to transcend, to connect to some larger, intangible life force, or at least process all of the overwhelming information in the world through my own strange language."

She calls her three most recent works a "transitional phase" for her and notes her current inspirations are "unsolved mysteries and conspiracy-theory podcasts." Even though they look very different, it's somehow clear they're by the same artist.

"I have multiple personalities hiding inside of me," she joked. "I've accumulated over 20 years of artistic practice involving looking at and researching a lot of stuff, but certain topics recur: unsolved mysteries, the supernatural, apocalypse, non-Western spiritual practices, animism, anthropomorphism, and science fiction. The viewer can probably sense the similar underlying artistic approach in each."

Though she prefers not to explain her work and would rather listen to others' interpretations, she said of Daywatcher, the name a Bigfoot hunter gave those who keep watch during the day, "an abstraction of a yeti or Bigfoot simultaneously camouflaging and moving through space."

Of Blue is the Rarest Color, she was inspired by UFOs and "the blue on a dragonfly I saw on a walk, then thinking about how blue is the rarest color in nature and looks supernatural or futuristic when you use it throughout a whole space."

Of Transcendental Longings, she said it "began without thought, just pouring watercolor on the paper and tilting it to form pretty shapes and color gradations, making an effort to not cover the whole space and leave some white of the paper showing through. I ending up seeing an ancient Mayan king's face in the washes, so I built that up a little bit, then left it alone."

Though she likes representational art, abstraction appeals to Allebe more.

"I like art that does something more than mimic reality. As an artist, I enjoy abstracting subject matter as an artistic process because it engages me, makes it fun, and allows my imagination to roam," she said.

"I like hearing each person who then views it bring something new and different to the interpretation. It doesn't tell you what to think. It brings new vision of the world out into the world. It makes the invisible visible." Δ