Paul Thorn heaps on the southern charm on Jan. 24 at the Fremont Theater

Southern charm is a real thing, as talking to Paul Thorn proves. When I called him he was “chillin’ in my hotel room with some coffee,” and as you read this interview, be sure to add a Southern accent to everything Thorn says for the full effect.

The singer-songwriter is the son of a preacher, did a stint as a professional boxer and skydiver, and when he was eventually discovered, he was quickly signed to A&M Records, where he recorded his first album, Hammer & Nail. It was his first and last foray into major label recording.

“Well, at the time I was just young and green and got a record deal with A&M, but unbeknownst to me, when I signed the deal, I didn’t know they were in the process of being bought out, and the fellow that signed me was gone after the sale, so I sorta fell by the wayside. We already had our own recording studio, so after that, we decided to record our own records and press our own CDs, and 10 albums later we have a successful model. We’re incredibly lucky to do everything ourselves, and when you own everything, it makes it all a lot easier.”

That’s another anomaly of Paul Thorn: He’s had the same band behind him for 20 years! How does that happen? 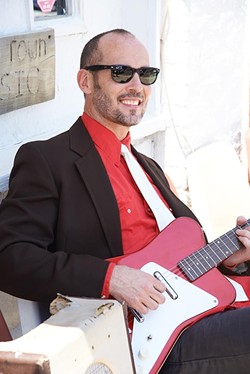 “I think we respect each other and treat each other good. Anyone you live with, travel with on a daily basis, there’s gonna be things that arise you might not like, and you might get on each other’s nerves, but that’s what friendship is—you love ’em in spite of that. But the real coup de grace that makes it all work is we each get our own private hotel room. It’s important to have time apart, private time to yourself. But you know what, any job, your job or my job, there’re gonna be things that wear you out, and we all gotta carry some sort of cross.”

In 2014, Thorn’s cover of “Doctor My Eyes” wound up on the compilation Looking Into You: A Tribute to Jackson Browne, which also included luminaries such as Bruce Springsteen, Bonnie Raitt, Lyle Lovett, the Indigo Girls, Lucinda Williams, Keb’ Mo’, Ben Harper, and Don Henley. Did it make Thorn feel like he’s finally made it to the big time?

“Well, it was nice to be on that. The gentleman that owns the company that did the record was a fan of mine and invited me out of the blue, and I was really glad I got to be a part of it, but it don’t work like that. I think I’ll feel like I made it when I got enough nuts stored away in a tree like a hardworkin’ squirrel. I’ll say that I ‘made it’ when my house in Tupelo, Mississippi, is paid for.”

The genius of Thorn’s songs are their characters—they populate his stories like living breathing beings, which makes me think he’s either really imaginative or is a great observer of humanity, or is it both or something else?

“Oh, I guess I’d go with the observer of humanity. I’m the sort who watches what goes on around my friends, family, and acquaintances, what’s happening in their lives and my life, and I string these things together in whatever way I think might touch the listener.”

Another of Thorn’s admirable qualities is his fairness and fierce loyalty. After the A&M Records mishap, he and his writing partner Billy Maddox struck up a partnership that’s never faltered.

“I’m 51 years old, and I’ve been working with Billy since I was 17. He’s actually my manager and he’s my day-to-day guy. He wears so many hats and is just a very valuable person to me. When I lost my A&M deal, we made a handshake agreement right then and there that we’d be business partners and share the profit, and me and him have split everything from day one. We own everything together—the CDs, the merchandise, and we’re not beholden to anybody. Billy is someone I trust through time and repetition of temptation.”

“Elvis was unfortunately surrounded by too many Yes Men who were scared of losing their jobs, but I got people around me—Billy, my bandmates, and friends—who don’t sugarcoat it when I need to be straightened out.”

What I like most about Thorn’s shows are how intimate they feel, whether he’s in a big room or small. What’s his secret?

“The secret is to go out there and look around and have a conversation, talk to ’em and care about ’em being out here and tell ’em from the stage you appreciate them coming, and try not to plan what you’re gonna say. Just be sincere.”

It feels like San Luis Obispo has been along for the ride as The Devil Makes Three rose from obscurity to the juggernaut they are now. They started playing shows at SLO Brew, but soon they had to play two nights in a row to accommodate their fan base, and for their last show, they needed the cavernous Alex Madonna Expo Center, which was packed to the gills!

Well, it’s been almost exactly a year since The Devil Makes Three played there, and since then they’ve kept busy, according to frontman and lyricist Pete Bernhard.

“Wow, since the last time we played there we’ve been doing some recording, we went on a tour of Europe, we’ve been working on some new material—a conceptual album of covers that’s half gospel songs and half songs about drinking and drugs, sort of redemption on one side and ruin on the other,” Bernhard explained. “We’re covering everyone from Muddy Watters to Townes Van Zandt. It turned out to be a little more complicated and is taking a bit longer than we thought, but we’ll release it soon. We’re also working on putting out our official bootleg, recording our live shows and compiling the best takes, so I guess we’ve been doing some studio stuff and some live stuff.” 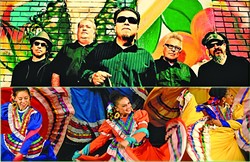 Bernhard says fans can expect some new material at their Madonna Expo Center show next Thursday, Jan. 28 (6 p.m.; all ages; $25 at ticketfly.com/event/1000845): “We’ll be playing a lot of the new material we’ve been working on during this tour. We like to try out new material before we put it out, get people’s ears on it. We’re also adding a percussionist to this tour playing washboard and some kick drum. And we have a fiddler with us again.”

The band’s been at it for more than a decade and some of their songs like “Old Number Seven” have become iconic fan favorites. Does Bernhard ever tire of playing the hits?

“Well, only when I lose perspective. I think writing a song and playing it for a living is a pretty great way to have a job, and we’re lucky because we wrote all the songs that people like. The key is to write new material and try to get them to like that too. And there’s so much you can do in live show that’s different from the album version. I think when people go to see a band live, they want to see the band do a little different version of a song.”

Aside from listening to his own material, whom does Bernhard recommend his hardcore fans listen to? 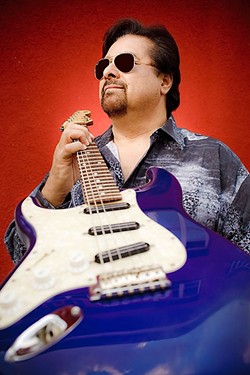 “For fans of our music, I’d encourage them to listen to a lot of blues music, and the biggest inspiration for me are the old Chess Records artists like Howlin Wolf, Little Walter, Mississippi John Hurt, the Rev. Gary Davis—that’s what inspires me on the blues side, and on the gospel side, I’d suggest the Sun Records artists.”

Sounds like the kind of homework I’d want to do. Parker Millsap will open this Numbskull and Good Medicine Presents show.