The 32-year-old attorney who narrowly lost a race for SLO County supervisor in June is now seeking a spot on the Arroyo Grande City Council.

Jimmy Paulding filed paperwork on July 26 to run for one of two seats on the council that are up for grabs in the Nov. 6 general election. Paulding joins three other candidates—two current planning commissioners and a retired police officer. 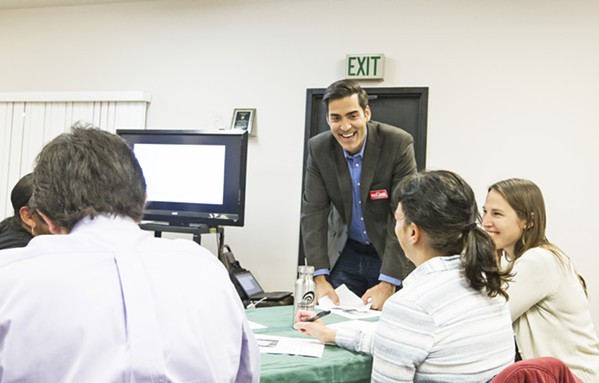 Paulding spent most of 2018 running for SLO County 4th District Supervisor. After an acrimonious and expensive campaign against incumbent Supervisor Lynn Compton, Paulding lost the race by just 60 votes in the June 5 primary. While Paulding lost his race against Compton, election returns showed that 52 percent of Arroyo Grande voters cast ballots for him.

A little more than a month after the loss, Paulding filed to run for Arroyo Grande City Council. Paulding said that he spoke with many Arroyo Grande residents during his run for supervisor and those interactions, in part, spurred him to run for the council seat.

"So many city residents shared their concerns with me," he said. "I said, 'I could serve in this capacity.'"

If elected, Paulding said he'd work to increase participation in local government and address issues like water, traffic, and affordable housing. In a statement on his Facebook page, Paulding touted his experience in development issues, including interning for the Arroyo Grande Planning and Development Department, his work as a planning and project manager for Vanir Construction Management, and his current job as a project manager, analyst, and attorney for design and engineering consulting firm Arcadis North America.

"I want to expand the vision for what already is a beautiful community," Paulding said.

Former San Luis Obispo Police Department officer Keith Storton filed to run in April. Storton, a 40-year Arroyo Grande resident, is running on a platform of sensible growth, supporting the city's existing businesses, and responsible spending, according to his campaign website. Current city Planning Commissioner John Mack filed to run in May. Mack wants to address what he believes is the mismanagement of the city's water resources, address deficiencies in the city's general plan, and support locally owned businesses, according to his campaign literature. Terry Fowler-Payne, another sitting planning commissioner, also filed to run in May. On her campaign's Facebook page, Fowler-Payne said her priorities would be responsible development and preserving the city's historic "home town" atmosphere.

At least one of the two seats up for election will be open to one of the four newcomers. Incumbent Councilwoman Barbara Harmon told The Tribune July 27 that she would not seek another term. The other incumbent councilmember up for re-election, Tim Brown, had not filed to run as of Aug. 1. He has until Aug. 10 to decide. Brown did not respond to a request for comment.

In addition to the two council races, the position of mayor will also be up for grabs. Incumbent Mayor Jim Hill is seeking re-election and current City Councilmember Caren Ray filed to challenge him. Δ