San Luis Obispo is at the precipice of one of its biggest growth surges in decades.

On July 18, the SLO City Council approved the San Luis Ranch housing project, a 580-unit development on 131 acres between Madonna Road and Highway 101. 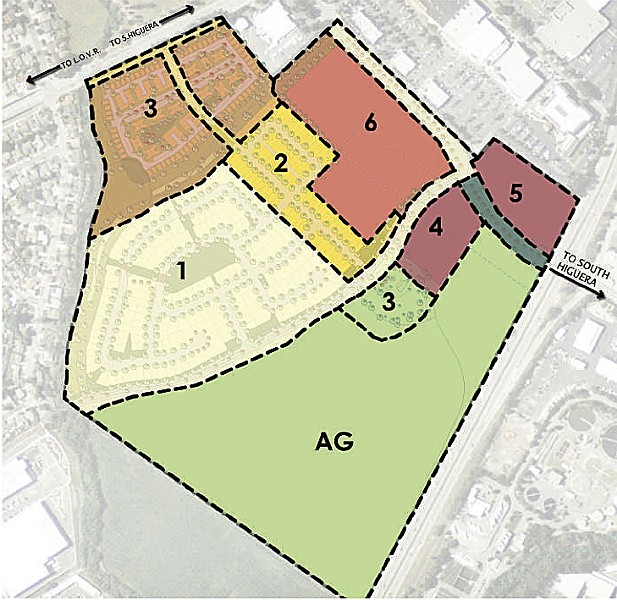 Up next, on Aug. 9, the Planning Commission will make a final recommendation to the City Council on the 720-unit Avila Ranch, proposed on 150 acres near Buckley Road.

The growth won't stop there. Another roughly 1,800 new homes are planned for in the Orcutt and Margarita areas east and west of Broad Street, respectively, and a mixed-use senior housing project is in the works at the 111-acre Froom Ranch off Los Osos Valley Road.

SLO officials say the projects are hallmarks of the city's 2014 general plan, which emphasized housing, and builders' swift forward progress is the result of a sustained, healthy economy.

"Because the economy has been so good for so long, it's allowed for this momentum to generate," said SLO Community Development Director Michael Codron. "Typically, you go through these cycles of recession and boom times; everybody's in a rush when the economy's good and nobody picks up the phone when the economy's bad. But here ... since 2010, there's been no recessionary period. It's allowed us to get an awful lot done."

While a bump in housing is welcomed news to many residents trying to make it in the most unaffordable real estate market in SLO County, the building boom brings with it some growing pains—the costliest being the transportation infrastructure required to support that growth.

SLO is looking at several major projects that are necessary to accommodate the traffic impacts of the buildout. City officials are currently negotiating with the developers and Caltrans officials to coordinate what's needed, when to build it and how to pay for it.

San Luis Ranch, on its own, will trigger an estimated $54.2 million in new traffic infrastructure, highlighted by the construction of a Highway 101 overpass at Prado Road.

"That's one of the biggest infrastructure projects that we have," Codron said of the $35 million overpass.

The San Luis Ranch developer, Gary Grossman of Coastal Community Builders, will reportedly pay a $22.8 million share of the infrastructure costs, according to a city staff report.

That leaves a $31.4 million gap. The city plans to cover the difference using a hodgepodge of funding sources, including property tax revenue, developer impact fees, general funds, and assessments from the future Community Facilities District (CFD) for the San Luis Ranch. Grossman's team may front the costs for the infrastructure beyond his "fair share," and then get reimbursed by SLO as funds become available, according to city documents.

The timing of the Prado overpass construction is an important detail. San Luis Ranch will be built in six phases, with the overpass required by the completion of the second phase in 2021-22. Phase one, to begin construction in 2018, consists of a couple hundred single-family homes. Some citizens expressed concern to the City Council about whether adequate infrastructure would be in place to address the first phase of development.

"The traffic congestion and circulation is a nightmare in that area of San Luis Obispo already," resident Cheryl McLean wrote to City Council members on July 5. "The additional stress on overcrowded streets ... will only exacerbate the problem."

Caltrans officials have also expressed concern about the initial impacts of San Luis Ranch to Highway 101. The agency asked SLO to monitor the increased traffic to the freeway as the project rolls out, in case additional mitigation is needed.

"We're working with the city so [the development] is done at a pace that can be accommodated," said John Olegnik, a senior transportation planner for Caltrans. "This is definitely one of the largest growth spurts we've seen in the city of SLO."

Olegnik added that Caltrans is still evaluating exactly what kind of facility will be needed at Prado Road and Highway 101 in the long term, in addition to the overpass. While the city is pushing for a full interchange at Prado, in a January letter penned to the city, Caltrans wasn't so sure, citing a 2014 report that identified "the closely spaced interchanges through the city as a key issue creating U.S. 101 mainline deficiencies."

"There's definitely the need to have something there," Olegnik said. "That's still being studied."

The 720-unit Avila Ranch project, if and when it gets the City Council's approval, will also trigger a series of major infrastructural projects—with a preliminary price tag of $64.5 million. Avila Ranch would require extending Buckley Road to South Higuera Street in addition to a series of road improvements up and down South Higuera, from South Street to Los Osos Valley Road.

Avila Ranch developer Andy Mangano's fair share of the costs is $45.3 million, according to a recent city analysis. City officials are in the midst of negotiating a development agreement with Mangano, which will be presented to the City Council sooner than the San Luis Ranch agreement since San Luis Ranch has to first get annexed into the city.

Codron noted that the city will also be looking to the regional SLO Council of Governments (SLOCOG)—which manages state and federal transportation funds—to chip in for the new infrastructure. Commuters countywide will traverse the new routes, Codron said. About 30 percent of the future trips between Broad Sreet and Highway 101 "will not begin or end in the city of SLO."

"When you look at how we're breaking out cost, there's definitely a regional component," Codron said. "These east/west connections in the city are new and expensive pieces of infrastructure to deliver, but they're critical for housing and they carry a lot of regional traffic." Δ