Pawn for a day

Chess Live isn’t your run-of-the-mill board-game experience. In fact, the events’ founder, Nancy Castle, who conceived the experience after a trip to Europe, doesn’t even like board games. Castle appreciates and constructs her Chess Live experience from ideas, such as the thought of a physical manifestation of a mental struggle. The game reduces the human hobby of war to the confines of a square battlefield no larger than a foot long on either side, carried out by 32 dispassionate warriors, 16 black and 16 white. And the idea of inverting the game of chess by returning it to the human scale with living, breathing pawns, bishops, and rooks, delighted the self-professed hippie artist.

In her earlier games, which began in August of 1982, Castle made use of Morro Bay’s giant chessboard, a 16-foot-square construction installed in 1975 at the base of the city’s Centennial Stairway in a misguided attempt to direct foot traffic uptown. The pieces that accompany the board were carved from two planks of redwood that were removed from a water tank. They range between 18 and 40 pounds in weight, with the tallest—the kings—rising a stately three feet high.

Castle happened to bicycle past the space, in the center of the Embarcadero, when the board was being installed and instantly realized that it could

hold human beings. But it wasn’t until she returned to Morro Bay from a tour of Europe with a theater company that she had a vision of what she could do with the game board.

“I went to the chess club and talked to them and asked them if their best player would come and play,” she explained.

The following October the inaugural Morro Bay Harbor Festival took place, and the next year Castle agreed to host Chess Live as part of the city’s new festival, providing the opportunity for both events to grow at a greater pace.

In response to her appeal for costumes, seniors hosting rummage sales would give Castle the first look at whatever material they happened to be selling. A man, whom Castle now refers to as King Walters, showed up at her door in 1983 and announced that he was the white king and would deign to grace the chessboard with his presence. Castle gave him the role. The Rotary Club partnered with a local lumber company to construct a portable chessboard that Chess Live could utilize during the Harbor Festival; the mobile chessboard has squares twice the size of the stationary setting on the Embarcadero.

“It really happened during the ’80s,” Castle beamed.

The way the game works, people step onto the board as chess pieces; the back line, representing the bishops, rooks, castles, and his and her highness—the king and queen—are dressed in pseudo-Renaissance attire. The front line—the pawns—are dressed as modern stereotypes and characters, waitresses, gardeners, fishermen, surfers, space aliens, and even a dog. Generally, Castle recruits actors who will play their character as a role, bantering with their opponents and entertaining the crowd. It’s beneficial to find performers that understand enough of the game to react when their character is under threat from the other side, but the only two people who require a thorough understanding of the game are those directing the action. Sometimes it’s funny to watch a confused chess piece move to the wrong square but, Castle points out, the game won’t progress if all of the pieces are lost on the board. Yes, it’s a live chess game. But, to Castle, it’s theater above all else.

“The better actors are able to keep up an inner and outer dialogue. Some people do just get kind of shell-shocked and stand there,” she admitted.

While Castle busied herself with her personal life—having a child and starting a business—Chess Live wavered out during the ’90s, with one exception. In 1994, she jokes, she was bamboozled into reviving the game. But in the last 14 years, the board has been silent, its heroes inanimate. Until this year.

Castle assisted Morro Bay’s Mayor, Janice Peters, with a show called the Fundraiser Follies in February. The taste of pageantry and theatricality was a not-so-subtle reminder of how much she had enjoyed Chess Live. And just like that she was back in the game, or show, which would take place at the Morro Bay Harbor Festival, Oct. 4 and 5 at 3:30 p.m. All she had to do was find the requisite 32 players.

“I want to be optimistic so I’ll say that I only need 27 more people to promise to be there,” she joked in early August, not yet having contacted local theater groups—traditionally the grounds for recruiting.

Just as Castle’s ideas and costumes have required some dusting off and refurbishing since she decided to re-stage her event, the city’s chess pieces—the inhuman ones, at least—are showing their age as well. The kings’ crosses have grown loose and cracks have developed beneath the knights’ chins, revealing the manner in which they have been handled over the years. The City of Morro Bay has begun to refurbish the pieces, beginning with the kings’ wobbly crosses, perhaps feeling that it would be demoralizing for the troops to go into battle with a bedraggled leader.

Anyone interested in acting as one of the front line characters—a pawn—will likely furnish their own costume. Castle is hoping for a host of colorful performers, from comedians to a mayoral karaoke singer (Janice Peters of Morro Bay). One benefit that comes with several years of chessboard silence is that Castle can now identify elements of the game that might be improved upon, such as periods of boredom between moves. She will look to her human chess pieces to enliven the entire game. 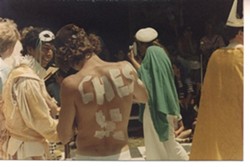 Chess Live is political, for Castle, as well. The very structure of the game is meant to represent war, and she works to deliberately undermine the implicit violence, instead spreading a message of peace. This year, she’s making Tibetan prayer flags to hang as festival banners. Citing the statistic—which she made up herself—that 80 percent of women hoard fabric, Castle is looking for fabric donations for additional banners. After some research, Castle also re-imagined the characters of her Chess Live bishops.

“When I first started the bishops were holy and they did invocations dedicating the game to peace,” she explained. “Bishops are, in my mind now, more Machiavellian Rasputin characters.” So, Castle is looking for actors willing to step into the role of the greedy chin-stroking opportunists.

If you’re eager to participate but uncertain what direction your character would take, here is a list of time-honored warriors any chess battalion would be fortune-favored to wield: house plant, squirrel, terra cotta warrior, and presidential candidate. And if it’s a shy personality that stands between you and the heat of battle, fortify yourself with mead and take comfort in the fact that you could hardly be called the first frozen chess piece.

Chess Live will take place during the Morro Bay Harbor Festival Oct. 4 and 5 at 3:30 p.m. Anyone interested in participating, either by acting or contributing costumes, can contact Nancy Castle at chesslive@live.com.