Pay to pray? Pismo Beach is hit with a lengthy lawsuit from a religion watchdog 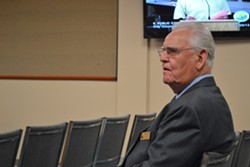 They’ve been agitated for years, and now a coalition of individuals and organizations who object to Pismo Beach’s brand of public prayer has filed an extensive, strongly worded lawsuit in San Luis Obispo County Superior Court.

The Freedom From Religion Foundation, a Wisconsin-based nonprofit, is the official name on the suit, with Dr. Sari Dworkin—a Pismo resident, psychologist, and self-identified “atheist Jew”—serving as the local plaintiff.

The suit, filed Nov. 1, alleges that prayers conducted at Pismo Beach City Council meetings are unconstitutional, requests a permanent end to said prayers, and seeks to declare the city’s appointment of Dr. Paul Jones as city chaplain as unconstitutional, too. Dworkin and the foundation are also pursuing nominal damages, attorney’s fees, and court costs.

The exhaustive 252-page lawsuit consists of a 25-page complaint, 170 pages of exhibits, and a 57-page appendix.

“With 20 percent of the adult population today identifying as nonreligious, at least a fifth of the population is routinely excluded and offended by official prayer conducted by the city,” Annie Laurie Gaylor, foundation co-president, said in a news release. “Elected officials should get off their knees and get to work.”

The council established an official “city chaplain” position in 2005, and appointed Jones—even buying him a nametag and official business cards. Jones, a Pentecostal preacher affiliated with the evangelist International Church of the Foursquare Gospel, has served as the city chaplain ever since. The position is unpaid.

During the 2005 council meeting that created the city chaplain position, former city manager Kevin Rice warned against the “undetermined legal risk” the city was assuming by creating the position in “California’s litigious climate.”

In his agenda report, Rice reminded the council of a 2003 resolution that expressly prohibited “sectarian” invocations at council meetings. The council created the position and appointed Jones anyhow, acknowledging “the blessings that the creator has bestowed on the citizens of Pismo Beach” in its resolution.

The core issue of the lawsuit is whether or not Jones’ prayers are sectarian. There is a legal and judicial precedent for invocations at government meetings, but only if the invocations do not advance or disparage any particular faith or belief, are directed solely at the legislators, and give everyone in attendance the option to opt out.

The complaint claims that Jones’ prayers often turn into sectarian mini-sermons that “proselytize and advance Christianity, and disparage non-Christians.” In addition, the complaint alleges that Mayor Higginbotham “asks all attendees … regardless of their religious beliefs or lack thereof … to rise for the invocation.”

For their specific legal claim, the foundation alleges that Pismo Beach has been in violation of several articles and sections of the California Constitution and Civil Code ever since the city chaplain position was created in 2005.

When contacted by phone, Jones thanked the reporter for the kindness, but referred New Times to the city for comment. Pismo Beach City Manager Jim Lewis, City Attorney Dave Fleishman, and Mayor Higginbotham said they were aware of the lawsuit, but had no comment.

Notably, Jones never once uttered the words “Jesus” or “Christ” during his 112 invocations, but one of his replacement pastors, Dr. Paul Toms, specifically referred to “Christ, our Lord,” in several of his 10 prayers.

Particularly damning, though, is Jones’ prayer from Oct. 16, 2012, when he asked the “Heavenly Father” to prompt citizens to “elect leaders who will stand up for the clear standards that are expressed in the Bible, the Holy Writings of God.” Jones also complained that “many of our citizens and leaders have turned from the path of righteousness in our lives and lifestyles.”

Jones then continued to request that “city hall and these council chambers” be filled with “the peace and power of Your eternal presence, and cause every home and every citizen in Pismo Beach to feel the impact.”

In his invocation from April 6, 2010, Jones bemoaned how the “moral compass of the Holy Scriptures has been largely laid aside.” Jones said this abandonment has caused “public morality” to decline to “dangerously low points.”

The complaint alleges that the prayers caused Dworkin to “feel offended, disenfranchised, and intimidated about participating in her own government.”

The SLO County cities of Arroyo Grande, Atascadero, and Paso Robles also hold invocations at city council meetings. However, none of those cities has created any sort of city chaplain position.

After several members expressed their concerns with Pismo’s invocations, AUSLO wrote a letter to the council on May 15, 2012, outlining those objections. That letter was followed by a longer Aug. 15, 2012, letter from foundation attorney Seidel to Mayor Higginbotham.

After both letters and several anti-invocation speakers at council public comment sessions failed to receive any kind of response, the foundation began drafting the lawsuit in earnest.

New Times first reported on this lawsuit online, on the morning of Nov. 4. At the Nov. 5 Pismo Beach City Council meeting, Jones—dressed in a gray suit and proudly sporting his official name tag—confidently shook hands, strode up to the podium, and delivered his invocation.

Dworkin, flanked by several AUSLO members, sat at the meeting. As Jones invoked the “invisible presence” of God and most of the room stood with heads bowed, Dworkin and the AUSLO members determinedly remained seated with their heads up.

The full text of the complaint, exhibits, and appendix, courtesy of the FFRF.