SLO sets the price of land at $1.1 million as opponents warn of voter reactions

The Chinatown project was the topic on the agenda, but politics seemed to be on everyone’s minds when the SLO City Council approved, on July 1, a plan to allow the Copeland family to purchase 1.3 acres of downtown city land for the cut-rate price of $1.1 million, plus another $2.6 million to replace lost parking.

The many speakers who lined up on both sides of the debate included a just-announced mayoral contestant, activist Terry Mohan, a city council challenger, and a chorus of warning voices that the voters would be sure to remember the 3-2 vote.

“The community will not let you forget that you are elected by the people,” said Dan Carpenter, who is running for a spot on the council in November. “I hope that this [responsibility] will rest on my shoulders soon.”

The mayor’s seat and two council seats are up for grabs in the November election.

Most notable among the evening’s speakers was local attorney Jim Duenow of Save Our Downtown, who offered $4 million for the property in cash. When asked what he’d do with it, Duenow said he might just sit on it, or perhaps build low-income housing. 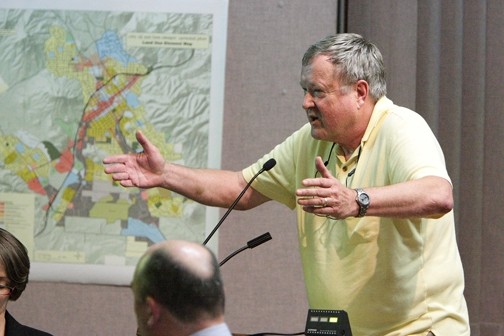 “It’s a rip-off and an outrage to sell this property for the amount you’re getting,” Duenow said. Officials responded that they were looking for a project, not any specific price.

The controversial agreement allows the Copelands to purchase the land, now the site of a city public works building and a parking lot, at a future date. The purchase can only be made when permits have been obtained from the city.

The property was recently appraised for $8.8 million, and the value agreed upon by the council in 2000 was $2.9 million, plus small yearly adjustments for inflation.

The first Environmental Impact Report was completed for the project in 2007, and it declared that the Copelands should have to pay to have for lost parking, too. That number was expected to be around $2.5 million, leaving many residents with the feeling that the City Council negotiated a $5.5 million price down to $3.7 million.

Even Bill Statler, the city’s usually authoritative finance director, had trouble answering a post-vote question by Romero of whether the latest deal is definitively lower or higher than the earlier offer.

It’s not straightforward, he said; it depends on which “baseline” one uses for comparison.

The Copelands’ option to buy the property goes back to 2000, when they struck a three-part deal with the city. The first two phases were completed in 2006. They are the Court Street project, and the government building/ parking structure on Palm Street. The third option, which would remove more than 140 parking spaces and a city-owned building to make way for a new hotel-retail-housing complex, expired in May. The city continued to negotiate under a 60-day extension, which expired July 3.

City staff explain the seemingly low price by noting that the deal is complex and should not be considered a straight business transaction. The $8.8 million price tag was arrived at through a “re-use” evaluation process, which took into account the amount it will cost to deal with requirements ranging from archeaological concerns to the slanted nature of the site.

Since the arrangement was made public more than a week ago, Carter has been a vocal opponent of this deal, even though he supports the project.

“The more I learned, the more I have come to the conclusion that this is an atrocious deal,” Carter said

More troubling to Carter, is the accuracy of the $8.8 million appraisal. Carter essentially questioned the staff and the appraiser’s competency for not also presenting the price, the Copeland family paid for several other properties on the same block.

“Why didn’t the consultant alert us to the price already paid?” Carter begged. “And why didn’t staff?”

Through his own research, Carter found that the Copeland family paid more than $13 million for a collection of properties, including the old Sauer Bakery. Those properties account for about 35 percent of the total project, compared to 65 percent of the land, which the city owns.

“I don’t believe the re-use analysis is worth the piece of paper it’s printed on,” Carter said “[The Copelands] already paid $13 million for a third of the land, and now we’re supposed to get three million for the other two thirds?”

Then, responding to the earlier offer to purchase the land for $4 million, Carter mused that if he bought the property for four million, he’d turn around and sell it to Copeland for five.

Officials at CBRE Consulting, the company that did the evaluation, responded after the meeting that the prices aren’t comparable because the other properties were bought when the market was higher and they were working businesses.