A Chicagoan painter finds many available venues for his work

Leon Oks’ first professional art show was raided by local government authorities. The then 22-year-old could not understand the objection to his paintings of landscapes, portraits, and villages.

“The portraits especially would bother them, the expressions on the faces,” he said. “They’re not happy.”

Understanding would come later, but acceptance of government-imposed censorship would not. Oks emigrated from the Soviet Union in 1980, but could not completely escape his fear of authoritarianism. When he first began making the gallery rounds in Chicago, portfolio in hand, he found himself asking the gallery owners if it would be acceptable to show certain types of work.

He’s since realized that the censorship of his work was a kind of commendation of the power of art, and his work specifically. His paintings had deeply affected someone, and that someone was worried that they would inspire powerful emotion in other people as well.

The artist’s expressions have been well-received, both in the United States and internationally. He’s preparing for an exhibit at the Louvre this autumn. Locally he is showing at the Seaside Gallery in Pismo Beach in an exhibit titled “Spring Break,” on display through the end of May. Oks met gallery owners Sherie and Tom Burgher at an art expo in New York. The two regularly attend such events; since purchasing the gallery two years ago they strive to keep an equal balance between local and outside artists. The gallery has been in existence for 14 years, but the Burghers still find it difficult to make locals aware of its presence. Its location in beachfront Pismo Beach makes it prime tourist territory, which isn’t always the clientele they’re hoping to attract.

“We are trying to re-marquee the gallery,” explained Sherie. “It’s been kind of a gallery/ boutique. We’re trying to make it more of a fine art gallery. Our goal is to make ourselves the go-to gallery between Laguna Beach and Carmel.” 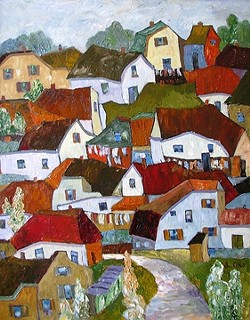 Alongside Oks’ work, Laurel Davar’s portraits of people of interest greet the gallery’s visitors. Further back, the wall is littered with ornate Disney clocks that chime “It’s a Small World” in a whirl of gilded dancing figurines hearkening back to the gallery’s boutique past. According to the website, Seaside Gallery plays host to 31 artists, with solo exhibits on a rotational basis.

Thus far, Oks’ “Spring Break” pieces have been the most expensive works the Seaside Gallery has carried, hovering at around $15,000 per piece. But an exhibit at the Louvre can only increase the value of Oks’ work.

Included in “Spring Break” are 15 original oil paintings, created over the course of the last eight years. The subjects, and styles, range somewhat wildly between nude women, polite landscape scenes dominated by trees, and tipsy little villages that date back to Oks’ childhood. His work is impressionistic. Figurative. Sensual. He makes a point of exaggerating the beauty he sees in nature, and people, and is particularly drawn to the female form, which he insists exemplifies nature. It’s not uncommon for people to compare Oks to Picasso, though the painter does not feel that there is a relationship between their work. The relationship is perhaps the most pronounced in his larger canvases dominated by entwined figures and arresting faces. Faces jut out at unexpected angles—sometimes upside down—and slender backs give way to deliberately rounded buttocks.

In several paintings Oks’ people are not people at all, but human plant hybrids with stems for bodies and outcroppings of appendages and breasts like leaves or petals. Oks calls the figures his plant people, and they manage to retain the same sensuous quality of Oks’ other figures. A sizeable measure of their rich beauty derives from Oks’ palette, which has a haunting quality. Faces and breasts shadowed purple meet vibrant swells of gold. And somehow Oks retains control of his vision, of the near-infinite shapes and curves and blocks of color.

“I can drive anywhere and see beauty,” he said of his inspiration. “I can meet people and all of a sudden people’s faces give me a composition.” He carries a sketchbook so that he can answer inspiration’s call. Almost always, he paints with oil; he insists that he finds even the smell alluring.