If you’ve ever attended a Pacific Conservatory Theatre (PCPA) production in the company’s Severson Theatre, then you are probably familiar with the uniquely intimate and cerebral feeling that the square room can impart.

PCPA has produced plays like Shakespeare’s The Tempest in the Severson, which gave the play’s deserted island ethos a boost. More recently, Tennessee Williams’ Glass Menagerie was aided well by the theater’s close configuration—you were right there with the characters in their small, humble apartment. 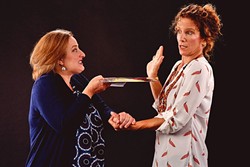 Now, to close out PCPA’s 53rd season, two plays will occupy the Severson Theatre in rotating repertory. Both plays include a cast of only two actors. Gidion’s Knot and Trying will show “in-the-round,” explained PCPA resident artist and Gidion’s Knot director Andrew Philpot.

Theater-in-the-round is when the audience surrounds a performance, from all sides. Gidion’s Knot tells the story of a mother (Elizabeth Stuart) and teacher (Polly Firestone Walker) meeting about the actions of the mother’s son. The play is full of argument and emotion, Philpot explained, which makes presenting it in the Severson Theatre particularly powerful.

“The actors have nowhere to hide, and for something like this, it kind of feels almost like a gladiator match,” he said. “And the audience is even closer to it, and for better or worse, they are also looking at their neighbors across the way and seeing how they are taking it all. So when you are doing theater-in-the-round it becomes even more communal than your regular proscenium theater.”

Gidion’s Knot is playing in repertory with Trying, which means that every night after each performance of one show, the entire set is broken down and the other show’s set is prepared, explained PCPA resident artist Kitty Balay.

Balay enjoys her directorial debut at PCPA with the production of Trying. The play focuses on the relationship between an elderly judge and his young secretary. Set in the mid 1960s, it’s about the real-life Judge Francis Biddle, who was Harry Truman’s Attorney General and the American judge for the Nuremberg Trials, Balay explained. Biddle (Peter S. Hadres) needs help squaring away a lifetime of keepsakes and paperwork in his home office, and Sarah Schorr (Karin Hendricks) helps him do it.

Over months of work, the two—separated by decades of age and cultural progress—learn from each other, gaining a perspective on their own lives from each other’s. They do this all in the cluttered office crowded by a career’s worth of stuff. That means props, Balay explained, and lots of them, all of which are moved after each performance to make room for Gidion’s Knot.

“She [the stage manager] comes into this mess and takes control of it,” Balay said. “But just the technical aspect of changing over—it’s what they do when they change between Santa Maria and Solvang, but this is different because as soon as one goes down another one comes up again—it’s a big undertaking.”

The personal nature of both Trying and Gidion’s Knot is aided by the up-close Severson Theatre, Balay said. It gives audiences the opportunity to view what PCPA’s actors do best, which is deliver a dynamic live performance, whether it’s a cast of 20 or a cast of two.

“The actor gets to kind of be in their reality in an almost more complete way than on the Marian [Theatre], which is a thrust, so it’s three quarters,” Balay said. “They are just living in the space, and the director just tries to make sure that every side of the audience is getting the whole story.”