When reviewing plays (or films) from classic source material, I often find myself mulling over what its creator would make of contemporary productions.

What, for example, would William Shakespeare make of productions of Hamlet reimagined as a Western or Richard III set in a fascist England? And what about Victor Hugo, the esteemed French poet and novelist? What would his reaction be to seeing his classic 1831 novel turned first into a heartwarming Disney cartoon for children and then a musical stage production? 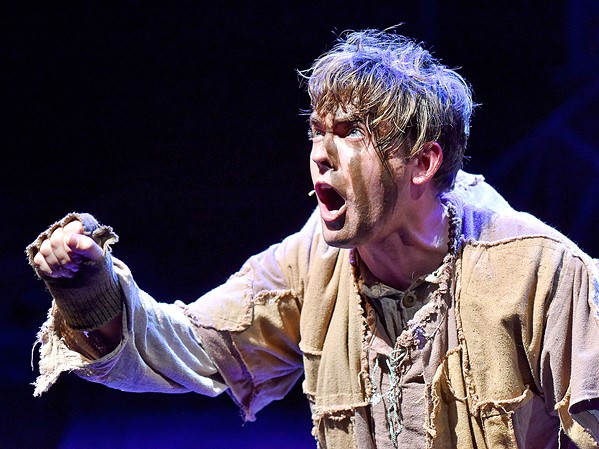 If he happened to catch Pacific Conservatory Theatre's (PCPA) production of Hunchback, it's hard to imagine him being anything less than impressed. The Santa Maria-based theater company has put together a sturdy version of the musical, first introduced to theatergoers in 1999 in Berlin as Der Glöckner von Notre Dame.

The production features the familiar plot of the novel. Frollo (Erik Stein) and his brother, Jehan (Sam Bravo), are taken in by Notre Dame Cathedral priests after their parents die. Frollo becomes a religious zealot, while Jehan prefers to indulge the more carnal aspects of life. When Jehan is caught with a gypsy woman, Florika (Méami Maszewski), he is thrown out of the priests' care. Later, on his deathbed, he sends for Frollo and tells him Florika died after giving birth to a baby and asks his brother to care for the infant child. Frollo, noting the child's severe birth defects and deformities, declares him a monster and names him Quasimodo (Nick Tubbs).

Quasimodo spends much of his life in the cathedral tower, creating a world in his own imagination, naming the bells he dutifully rings and talking to the gargoyle statues, his only real source of comfort. He is still cared for his by his uncle, whose tutelage is at best reproachful and filled with disdain.

The gargoyles convince Quasimodo to venture out to the Festival of Fools, fearing it might be the last year the gypsy festival is allowed to take place. That's when Quasimodo meets the enchanting Esmeralda (Amani Dorn), who is also having quite an impact on Phoebus (Jeff Salsbury), the new captain of the Paris Guard. The lives of the four main character intersects, in often touching and tragic ways, but if anyone is worried that the brutal scenes from the source material might be too dark for young children, it's almost a non-issue. Some of the more violent moments from Hugo's book are toned down, and overall it works well for younger children.

Visually, the production excels. The set is simply breathtaking. Set designer Jason Bolen has managed to build a gorgeous replica of the interior of Quasimodo's sanctuary, the bells looming over the production in such a burly manner that they almost seem ready to swallow the entire theater. The gargoyle masks are also remarkable pieces of art, feeling like a haunted chorus at times.

One of the true standouts of the production is "Out There," belted out pitch perfectly by Tubbs as Quasimodo. Tubbs has been with PCPA since 2014 and it's nice to see him get a big number like "Out There" to stretch his talent. Tubbs also has one of the more compelling moments of the production, as he is first introduced to the audience in the role of a handsome young man, the actor showing the audience his transformation into the hunchback with the question, "What makes a monster and what makes a man?"

As usual, George Walker delivers a strong and nuanced performance, this time as Clopin. Walker has an uncanny ability to disappear into his roles, and he's so reliable as an actor it's almost hard to nitpick anything. Dorn is really magnetic as Esmeralda, a role that can play a bit clichéd at times. But she chooses to cling to the more humanistic elements of Esmeralda instead of the caricature foreigner-as-seductress trope the role could fall into.

I'm not sure what Hugo would make of chipper life-affirming songs or the alterations to his original material. But once he realized he was living in an era where he would get to live tweet about it or watch it on a jumbo big screen television at his convenience, he would probably come around to the modern take on his classic story.

Sun Arts and Lifestyle Writer Rebecca Rose is more a monster than a man. Contact her at rrose@santamariasun.com.