The house lights dim, the stage lights go up, and the overture begins with great fanfare. You can see toes tapping in the audience to the endless score of hits—the urgent strings of “You Did It,” the elegant yearning of “On the Street Where You Live,” and the buoyant joy of “I Could’ve Danced All Night.” Suddenly, we’re transported to London, 1912. A passel of street vendors, clad in tattered tweeds and Snidley Whiplash-style mustaches, sways to and fro. The whole scene could be lifted straight from an old-timey children’s book. It’s so sweet and nostalgic. And then you hear it. Amid the pleasant hums of the hustle and bustle, a shout. A roaring, piercing, and vulgar “Ow!” It could only mean one thing. Eliza Doolittle has arrived.

So begins PCPA’s production of My Fair Lady, in the same fashion the legendary show from Alan Jay Lerner and Frederick Lowe has opened since its Broadway premiere in 1956. Then, Julie Andrews starred as the incomparable Eliza Doolittle, a poor-yet-brassy English lass looking to lift her station in life. Opposite Andrews was Rex Harrison, who played the haughty Henry Higgins, a middle-aged phoneticist so fascinated and repulsed by Eliza he decides to take her on as his latest experiment. I don’t believe I need to tell the rest. We all know what happens. There’s some rain in Spain, a horse race, and some very pesky slippers.

Fortunately, both fans and newcomers won’t be anywhere near as put off by this production as Henry is by Eliza’s irksome accent. Directed and choreographed by Michael Jenkinson, this is a fine, straightforward edition with rich details and even richer performances.

From her very first howl, Karin Hendricks’ Eliza delights with effortless charm. The character could easily be grating. Eliza Doolittle is an abrasive young woman, in a script rife with “Ow!” after “Ow!” It would be easy to play her as pathetic and shallow to the point of annoyance. But that’s not what Hendricks does. In the more muted moments, she captures the character’s vulnerability and her emergent grace with great fortitude. During the number “Just You Wait,” when Eliza swears she’ll show up Professor Higgins and his disregard for her, Hendricks stomps on his hat with such glee, it’s infectious. We root for her against Henry Higgins. But it’s not entirely a fair fight. As much as the show highlights its titular lady, here she’s somewhat outshone by the men.

As Henry Higgins, Andrew Philpot is a magnetic force. He exudes an easy arrogance that borders on charming rather than offensive. He delivers lines like “you squashed cabbage leaf” to Eliza with such sneering panache, it’s impossible not to love and hate him at the same time. He’s so joyously pretentious, arching his eyebrows with utmost derision while singing the lady-hating lyrics of “I’m an Ordinary Man.” It’s a full-bodied performance with Philpot. He leaps over chairs and a fancy fainting sofa, injecting some vigor and freshness into a piece that’s been played over and over and over again for nearly 60 years.

Philpot isn't the only one who revitalizes the show. As Alfie Doolittle, Erik Stein shines. In a leather cap (more flap than cap, to be honest) and covered in dirt, he shuffles his way through “With a Little Bit of Luck” and “Get Me to the Church on Time” with an oafish swagger. There’s a twinkle in his eye as he hits on the local dames, haggles with Higgins, and drinks yet another pint. In a show that could easily feel “been there done that,” performances like Stein’s and Philpot’s add a nice bump of energy in addition to Hendricks’, a splendid supporting cast, and some spirited set pieces.

From the extravagant, Edwardian hats designed by Eddy L. Barrows, to the “smashing, positively dashing” choreography to “Ascot Gavotte,” there’s more than enough to recommend this show. It has everything going for it: a glittering set, PCPA’s already sterling production value, and the show itself. Though the musical may be nearing 60, PCPA proves My Fair Lady still enchants with its opposites-attract romance and old-fashioned glamor. Despite the title, it is certainly more than fair.

Arts Editor Jessica Peña could’ve danced all night. You can reach her at jpena@newtimesslo.com. 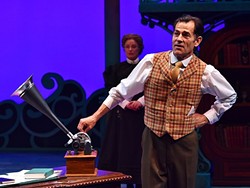