People don’t usually think of Jane Austen as a controversial author, but intense fans of her work—and her loudest detractors—haven’t quit discussing her writings for generations now. You either love her novels or you don’t, and for those who can’t get enough Austen, there is nothing more welcoming than an adaptation for the screen or the stage.

The Pacific Conservatory Theatre (PCPA) is doing just that, staging its version of Austen’s first published novel, Sense and Sensibility, at the Marian Theatre at Allan Hancock College. It opened in mid-July and will continue in August at the Solvang Festival Theater. The adaptation is by Joseph Hanreddy and J.R. Sullivan, who already adapted the beloved Pride and Prejudice, which PCPA also performed. 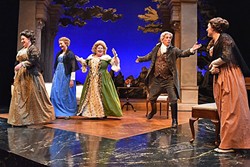 The production asserts itself immediately with the set piece alone: a forested backdrop, a small but crucial platform in the center, and two towering, Romanesque archways. This sets up the provincial and pastoral England of Austen clearly in our minds, as does the jaunty chamber music that fills the Marian Theatre before the show even starts.

The opening scene is a somber one, as the elderly Henry Dashwood (Peter S. Hadres) lies on his deathbed, with his wife, Mrs. Dashwood (Elizabeth Stuart), and daughters Elinor (Shae Palic) and Marianne (Sierra Wells), clinging to his every word. Mr. Dashwood’s son arrives, John (Adam Schroeder), though he is a son from Mr. Dashwood’s long deceased first wife.

As was the law at the time, Mr. Dashwood’s entire estate must go to his male heir, and so he implores his son to make sure that his wife and daughters—John’s half sisters—are well provided for after his death. John does so just before the old man passes.

In the wake of Mr. Dashwood’s death, we learn much about each character. We learn that John is susceptible to persuasion from his wife, Fanny (Jennifer Holcombe), who convinces the young inheritor that his father probably didn’t mean for him to provide much in the way of money to his grieving half sisters and stepmother.

We also learn of the differing personalities between these two sisters, Elinor and Marianne, whose temperaments give the story its name. Elinor is much more reserved than Marianne, who is a fiery romantic. Elinor gives much more care to propriety, whereas Marianne is an idealist, hoping for young love and even crossing convention in the pursuit of it. Both Palic and Wells play their characters well, with all the subtly and bombast the sisters respectively require.

The ladies Dashwood accept an offer from a distant relation of Mrs. Dashwood’s to live in a cottage far from their longtime home. The three are reluctant to leave their beloved house, but are even more reluctant to see it changed under the rule of John and Fanny. Holcombe asserts herself as a fabulous antagonist early on as Fanny, who sees her brother Edward Ferrars’ (Matt Koenig) infatuation with Elinor and is all the more happier to see the three leave the estate.

Upon arriving at the estate of Mrs. Dashwood’s relation, Sir John Middleton (Michael Tremblay), the three immediately enjoy their cozy cottage and are set on by Sir John and his mother-in-law, Mrs. Jennings (Kitty Balay). The two boil over together with welcome and love for the ladies, inviting them to dinner with an almost hostile hospitality.

At dinner, the ladies meet a friend of Sir John’s, Col. Brandon (Andrew Philpot), a middle-aged bachelor who is immediately taken with Marianne for her musical skill and beauty. Marianne, as is her nature, makes it clear she isn’t interested, though Mrs. Dashwood and Elinor are very kind to the man.

The next day, on a walk in the countryside, Marianne takes a spill, spraining an ankle, and of course, in true Jane Austen fashion, is aided by a dapperly dashing stranger, who carries her back home. John Willoughby (Riley Shanahan) is the man’s name, and he is immediately in favor with all the Dashwood ladies for his heroic attention.

In true Austen fashion, gossip and secrets abound in this beautifully crafted story, and PCPA is an excellent steward of such fiction. From the masterfully crafted summer dresses and coat and tails, to the lighting design—which elicits sunsets and shady dells—the audience is absolutely transported into this world of parties, carriage rides, and drawing room banter. Every player embodies his or her character down to the bone, realizing Austen’s tale in a fantastically authentic experience.

Arts Editor Joe Payne from New Times’ sister paper is totally in the pro-Austen camp. Contact him at jpayne@santamariasun.com.