Good news. You don't have to be an expert on the work of Russian playwright Anton Pavlovich Chekhov to enjoy the Pacific Conservatory Theatre's (PCPA) Vanya and Sonia and Masha and Spike. But a little inside baseball knowledge won't hurt either. 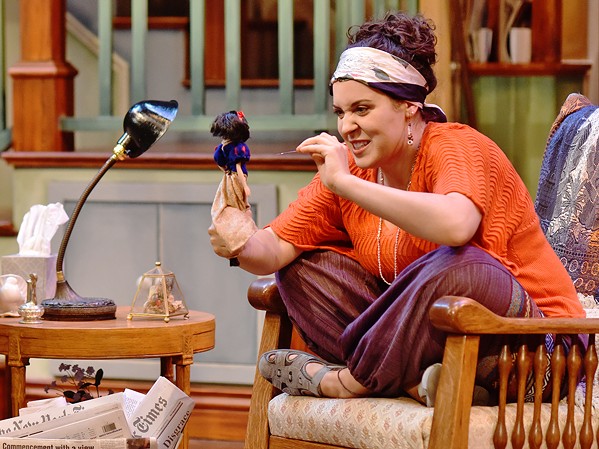 The play, written by Christopher Durang in 2012 (and based on Chekhov's characters), tells the story of an oddball family living in Bucks County, Pennsylvania. The story opens with Sonia (Anne Guynn) and Vanya (Peter S. Hadres) having a rather depressing argument and exploring the depths of their ennui in the home of their dead parents.

Vanya and Sonia have lived there for more than a decade, forgoing their own lives to care for their dying parents as their sister, Masha (Polly Firestone Walker), ran off to Hollywood to become a successful-ish movie star. Now past Hollywood Death Age for a woman (older than 40), Masha returns with her young lover, Spike (Sam Bravo), in tow to drop a bomb on her family. Other than the titular characters, the play also features Cassandra (Annali Fuchs-Wackowski), who certainly lives up to her name, and Nina (Madison Shaheen), an aspiring actress who threatens Masha but finds a place in Sonia and Vanya's hearts.

The attention to detail is mind-boggling. There are tiny props hidden in almost every nook and cranny of the set that speak to the character's soul. A card table next to a stand with a push button corded phone gives more away about Vanya and Sonia's frozen life than some of their monologues do.

This play is a comedy and definitely not one for children. Get ready for a few F-bombs and a lot of bawdy jokes about sex and sensuality. If you're shy about the human body, be warned: Bravo spends much of this play in little more than his underwear (it's all part of the joke).

Fuchs-Wackowski is a scene-stealer as the tormented prophet with a penchant for voodoo. I loved her energy and commitment to Cassandra's plotting and scheming. She bends into the character with a searing physicality that shows great promise and undeniable talent.

Speaking of body (sorry), Bravo is more than just a handsome face. His Spike is simultaneously cocky and empathetic, like a puppy that poops on your living room floor and then falls asleep cuddling with a cat. You can't help but love him and that's because Bravo is determined to push back on the stereotypes of the role. He has a keen sense of when to pull back the beefcake and expose the lost boy inside, one who's looking for love and maybe just a small role in another HBO sequel.

The only weak points were in the material. Sometimes it felt like we were watching two good plays and one excellent one. The start of the first act is a bit uneven—the forced Chekhov references create some imbalances in the character motivations. I didn't buy Sonia "pining" for Vanya (because, ew, gross), nor I did believe their angry cup-throwing fits. I also rolled my eyes a bit at Vanya's meltdown over technology, which didn't seem in character at all and dragged on way too long, seeming more like a drunk uncle's Facebook rant than the musings of a brilliant yet ignored gentle-hearted intellectual.

That being said, the middle of the play is a comic fireworks show. Between Guynn's hilarious Maggie Smith impression to Walker's savage Snow White tantrum, it sails through with perfect timing and delivery. Once again, PCPA finds actors who harmonize well together, even if the material may be less than perfect in some places.

Sun Arts and Lifestyle Writer Rebecca Rose is all about boxers over briefs. Contact her at rrose@santamariasun.com.