Peaks that pique: A guide to hiking and exploring SLO County's Nine Sisters

Stretching between Morro Bay and San Luis Obispo, the craggy peaks of the Nine Sisters—a chain of hills dividing the Chorro and Los Osos Valleys—provide some of the most iconic vistas in SLO County.

In addition to their visual singularity, the Nine Sisters or the Morros (a Spanish word meaning mountains or small, round rocks) are a geological oddity as well. They’re classified as “volcanic plugs”—essentially leftover, congealed lava that once filled volcano vents millions of years ago.

William H. Brewer, a Yale professor who led a geologic expedition through California in 1861, made a note of the Nine Sisters in his journal.

“These buttes are a peculiar feature, their sharp, rugged outlines standing so clear against the sky, their sides sloping from thirty to fifty degrees,” Brewer wrote. “A string of these buttes more than twenty in number, some almost as sharp as a steeple, extend in a line northwest to the sea, about twenty miles distant, one standing in the sea, the Morro Rock rising like a pyramid from the waters.”

In its guide to the Nine Sisters, the Santa Lucia Chapter of the Sierra Club notes that there are more than “21 major and minor peaks in the Morros, but there are nine major peaks, hence the name The Nine Sisters.” Depending on how they’re tabulated, some people choose to refer to the peaks as the Seven Sisters, but the Sierra Club’s accounting seems to be the industry standard.

Ranging from the shortest (Morro Rock at 576 feet) to the tallest (Bishop Peak at 1,559 feet), the Nine Sisters are also popular hiking spots—though not all are publicly accessible.

In the interest of promoting the public health and fitness of SLO County, here’s a guide to hiking and exploring the Nine Sisters.

Perhaps the most iconic (and certainly the most photographed and painted) of the Nine Sisters, this morro rises out of the Pacific Ocean on the Morro Bay coast.

Though it was quarried for many years, Morro Rock was declared a California Historical Landmark in 1968, and it’s been protected ever since. The Salinan and Chumash tribes have special dispensation to climb the 576-foot rock for special ceremonies, but it’s illegal for the general public to do so.

The rock is the centerpiece of Morro Rock Natural Preserve, and—though climbing is a no-go—the public is welcome to walk around the preserve, located off the Embarcadero in Morro Bay.

The second peak in the Nine Sisters chain is only a little bit taller at 665 feet. It’s located within Morro Bay State Park, with several different well-maintained hiking trails leading to the summit.

The Sierra Club guide notes somewhat speculatively that, “It is rumored Black Hill got its name from a tar seep on the north side of the hill.” While no visible tar seep remains, the peak does offer views of the city of Morro Bay and the bay itself.

This is another easily accessible morro located within Morro Bay State Park. Slightly taller at an elevation of 911 feet, the peak is named after Portuguese explorer Juan Rodríguez Cabrillo, who famously sailed the California coast in 1542, observing the Nine Sisters on  his journey.

At 1,404 feet, this stony morro is significantly taller than its Western brethren, visible from Highway 1, and its peak is roughly shaped like an elephant.

Hollister (the name of a family who used to own the peak and surrounding land) is still privately owned. Rumors abound about a vigilant owner who’s quick to call law enforcement on trespassers, so hiking isn’t recommended. 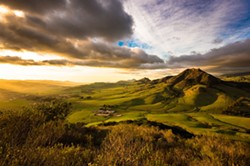 This morro (1,306 feet) is owned roughly half and half by a private owner and the California National Guard, which uses it for physical fitness training for those installed at Camp San Luis Obispo.

Access to the peak is very limited, as Camp SLO remains an active base with stringent security regulations, especially post-9/11.

Chumash is 1,257 feet tall, and another one of the Nine Sisters that’s privately owned. Though it’s directly adjacent to the popular Bishop Peak, Chumash is the polar opposite in terms of accessibility.

This is probably the most popular of the Nine Sisters for hiking. At 1,559 feet tall, it provides the most rigorous hiking experience, with two different easily accessible trailheads.

According to Doug Carscaden, supervising park ranger for the city of SLO, the peak is primarily owned by the city and SLO County. State Parks owns a parcel as well, but all three entities work together to maintain each other’s land and trails.

This 1,292-foot morro is almost smack dab in the middle of SLO, and the distinctive white “M” on its east face (which stands for Mission Prep High School) is visible from much of downtown.

Carscaden said the city and the Madonna family (proprietors of the Madonna Inn) each own a substantial piece of the morro, with a local church and the Bressi Ranch also possessing a few parcels. Public access is permitted throughout, and there are multiple trails to the summit.

Though the morro is often called Madonna Mountain or San Luis Mountain, Cerro San Luis is its  official name.

The last and southernmost of the morros, Islay Hill stands at only 775 feet tall. It lies on the southeast side of SLO.

“There are a few different trailheads and, even though it’s technically  privately owned, it’s city open space and we have an easement on the property,” Carscaden said.