A bizarre new twist on the death penalty debate is taking flight at the California Menâ€™s Colony in San Luis Obispo. The experts have testified, the evidence is in, and the sentencing continues on the prisonâ€™s only entirely free residentsâ€”a petulant flock of wild turkeys. 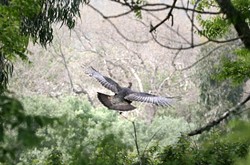 # According to prison officials, the facility recently ran afoul of the longtime resident poultry, which traditionally roost in the eucalyptus trees of nearby ranches. Because prisoners feed the wildlife, staff says the birds return in greater numbers and grow increasingly aggressive every mating season, particularly during March and April, when a gang of tomsâ€”numbering as many as 50â€”regularly invades the parking lot of the facility, feigning attack toward anyone who approaches and  damaging cars. Thoroughly annoyed prison officials called in experts from Wildlife Services, who April 4 attained permission from the U.S. Department of Fish and Wildlife to capture four birds identified as ringleaders. The trappers managed to bag and remove two of the tom dons.

Not a dangerous animal by any stretch of the imagination, a CMC wild turkey will approach a trespasser to its recently annexed territory and bloat its feathers to look more imposing. Turn, and the turkey will chase, though his beaks and talons prove of little threat. â€œTheyâ€™re more of a nuisance than anything,â€? prison spokesperson Shelly Thompson says. The birds, however, can provide quite a fright for children and parents visiting incarcerated family members. Several accounts posted or relayed through the CMC message board at www.prisontalk.com mention turkeys pecking at children approaching to pet them. For the most part, however, the birds prove more a menace to property. â€œOne walked up on me at my car one day and it was taller than the window,â€? His_Brown Suga posted of a run-in with a few of the toms. â€œNeedless to say I was a lot less than comfortable.â€?

Yet, the prisonâ€™s efforts to eliminate or curb the turkey nuisance managed to ruffle the feathers of at least one local resident. CMC neighbor Don Smith says the facilityâ€™s bird-brained schemes to trap the crafty turkeys for relocation appear equally ill-fated and unnecessary. â€œIf they would just send prisoners out with pots and pans they could scare them off,â€? he says. â€œI mean, if these guys got the time to feed the stupid birds ... .â€? A longtime resident of the unnamed valley where the prison sits, Smith regularly watches the turkeys as they make their morning trips from the roosting area near Chorro Creek up into the hills behind his property. The annoyed neighbor says the solutions initially proposed to remedy the seasonal onslaught ran the gamut from ecological remediation to medieval acts of deterrence. â€œThey wanted to capture a tom and stuff it,â€? he claims, citing a story he heard from a friend working at the facility. â€œItâ€™s just ridiculous.â€?  Smith says heâ€™s frustrated with the waste of taxpayer money on such a simple problem, though he would also hate to see the birds go. â€œIt got my dander up because I enjoy them,â€? he says. â€œTheyâ€™re fun to watch and a nice bird to have around.â€? A spokesman with Fish and Wildlife says the department has received no further complaints since the removal of the two toms, though that action also coincided with the end of breeding season. With the birdsâ€™ hormonal stopwatch renewed, at least the dilemma can wait one more year.