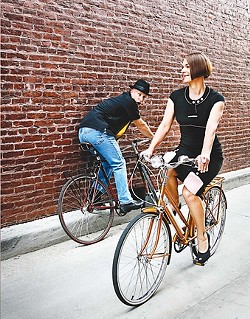 If Willy Wonka had a bicycle-mad cousin the result would not be unlike the assembly of two-wheeled geriatric contraptions, sculptural wonders, and colorful canvases temporarily in residence at 1060 Osos St. in San Luis Obispo. Passersby, heroically bypassing the lingering aroma of pizza from next door, have to duck to catch a glimpse of the Bike Momentum art show in the subterranean space. But a stoop is a small price to pay for a glimpse into this alternative world, a dynamic blend of gallery, museum, and funhouse.

This marks the third year that the Tall Bike Posse, piloted by the honorable Sheriff Bill Mulder, has adopted the space—on loan from Rob Rossi—for the art exhibit celebrating Bike Month. And no corner is left unoccupied. An installation of four-dozen bicycle wheels serves as a divider between the ramp leading into the gallery and the art that occupies it. A bicycle blueprint pays loving homage to the anatomy of the cyclist’s loyal companion, somewhat crinkled and work-worn. Actual bicycles and tricycles, most of them vintage and rusted, rest suspended from the ceiling or mounted to the wall. One colorful apparatus, laden with excess wheels and a jaunty umbrella perched atop the behemoth, actually wheels its way across the room.

Paintings are alternately idyllic pastoral scenes of bicyclists, life-sized portraits personifying bicycles from various angles into an endearing face or almost (delightfully) obscene view of a bicycle seat from behind, and star-studded inspirational silhouettes of bicyclists, like the one that reads “kiss the sky, chase the stars, ride between extremes.” Works created by schoolchildren hang next to those of professional artists.

“It’s not snooty. It’s not pretentious. It just is. Anybody can submit something and we won’t turn them away,” said Mark Freear, a contributing artist who helped organize the show. 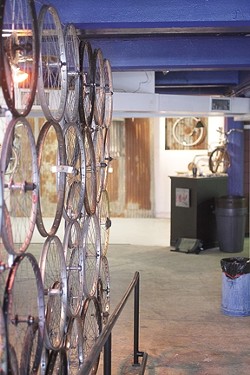 And at the room’s center is a contraption, constructed completely from bicycle parts, with a sign that reads, “crank me.” When the pedals are spun, a yellow rope arcs through the air.

What appear to be tribal masks—in reality, bicycle seats painted to resemble an alligator’s grinning visage or a mosaic face—border vintage posters of a naked, golden-haired woman flying beside a bicycle; mice flocking to a pile of bicycle wheels; and two men in matching attire escaping the earth’s orbit on a tandem bicycle.

No detail is too small for Mulder and Freear to attend to, from mosaic tiles painted with pink or blue bikes to distinguish the men’s and women’s restrooms, to industrial sheet metal, mostly rusted, fastened to portions of the wall as a creative canvas for the art. The various pieces are for sale, supplemented by a messenger-bag kiosk, jewelry fashioned from bicycle tires, T-shirts, and buttons. Twenty-five percent of all proceeds will be donated to the SLO County Bike Coalition. And in a peculiar fit of compliance, the city temporarily de-commissioned the metered parking space in front of the gallery to make space for a bike rack. At the Bike Momentum gallery, at least, the bicycle reigns supreme. 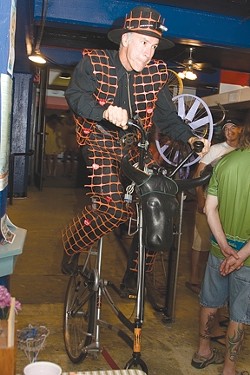 “You get on a bike and you don’t think about how fat you are,” said Mulder. “You feel healthy. You feel invigorated. You feel relaxed.”

“You can actually see the architecture and smell the jasmine,” added Freear.

An event hosted at the exhibit’s conclusion invites bicyclists to view the architecture and smell the jasmine while wearing the latest in avante-garde bike fashion. Or, simply an outfit with nary a scrap of spandex. The Bike Fashion Show, in its second year, features accoutrements designed and created by local designers and bike enthusiasts, as well as clothing donated by local businesses. Sophie Boban, the show coordinator, was inspired by the fashion shows she used to host in Austin, Texas, while running a vintage clothing store.

In her search for designers, and models, Boban recruited friends and fellow cyclists. Some fashion their own clothes and accessories as a hobby; for a few, it was an inaugural experience. Rachel Duchak, for example, hasn’t made jewelry before, but she’s making earrings from dismembered chain links that she got at CBO.

“They’re kind of for people in the know about bikes,” she explained. “Everyone else is like ‘are those handcuffs?’”

Boban’s boyfriend, Paul Doering, is responsible for creating the catwalk. Last year’s event featured a figure-8 walkway, identified by tape on the floor. But this year Doering is creating a ramp walkway, ending in an elevated stage, from reclaimed and recycled wood.

Gathered in a garage on a chill April evening, armed  with sewing machines, scissors, and drills and fortified with wine and pizza the various collaborators attacked their gathered materials. Bike tires, wheels, spokes, chains, gears, cables, and fabric slowly became bicycle messenger bags, vests, a mermaid-themed skirt, even an unlikely bikini. Each artist has a different vision, some more clearly defined than others. A trio perplexed by the difficulty of shaping bicycle tires into a figure-flattering shape watched Kylie Mendonca’s progress sewing through bicycle tubes to make a vest. Her success will help determine whether they want to sew or staple their costume. Mendonca also bent bicycle wheels  into wings. But her pièce de résistance is the scalloped mermaid skirt.

“My dream is to make a really long mermaid suit and then flop around all over the stage in it,” she explained, with an uncertain degree of humor.

Sitting at a machine opposite Mendonca, Jeanné Mutziger sewed a produce bag shaped to fit the dimensions of a bicycle basket. Her goal is to meld practicality, convenience, and fashion to produce accessories that make bicycling more pleasurable.

“You gotta have a place to put your produce,” she concluded. “It’s like dolling up your bike. Bikes should be cute too.”

Participating businesses, including Cambria Bicycle Outfitters, Wally’s, HepKat, and Central Coast Surfboards, are contributing bike-friendly clothing for selected models to display. Those particular outfits won’t feature bike cogs sprouting out of rubber armbands, but they serve a significant function nonetheless: to remind would-be and potential cyclists that fashion and bicycles are by no means mutually exclusive.