Pedego Electric Bikes in Avila Beach is fun on wheels 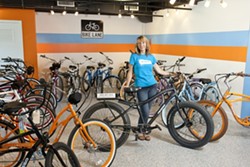 There are many good reasons to ride a bike: It’s good exercise, there’s no fuel cost, it’s better for the planet, and you don’t have to worry about finding parking. But if you head over to the recently opened Pedego Electric Bikes in Avila Beach and take one of their electric bikes for a spin, you will likely be reminded of one the best reasons of all: It’s simply a lot of fun.

“We sell smiles” is written across the front counter, greeting customers as they walk through the door. To the left is their showroom filled with a colorful selection of Pedego brand bikes. Pedego bikes are a retro cruiser style bicycle with the addition of a quiet, battery-powered electric motor that can be used in conjunction with pedaling, on its own, or not at all, at the rider’s discretion. Depending on the model, Pedego bikes feature either a 36 volt or 48 volt lithium battery that takes about four hours to charge, and will take you roughly 20 miles without pedaling, or 40 miles with pedaling. They can reach a top speed of about 20 mph.

Pedego was founded in 2007 in Irvine and now has stores across the globe. The Avila Beach location, opened by owner Jim Schlagel, is the first on the Central Coast. Daily operations are handled by Director of Marketing Sandra Napua and Manager Jason Plough. A recent transplant from Santa Fe, New Mexico, Napua’s decision to move to the Central Coast was cemented with a job offer from Pedego.

“How can you not be passionate about selling fun?” asked Napua. In addition to sales, Pedego offers three rental options: one hour for $20, three hours for $50, or eight hours for $70. Starting in October, Napua plans to offer guided tours of the surrounding areas such as the popular Bob Jones trail and nearby wineries.

Purists may take issue with the notion of motorizing a bicycle, but at Pedego having fun prevails over any sort of cyclist dogma.

“The whole thing about no pain, no gain—goodbye!” exclaimed Napua.  For those interested in cycling as a way to incorporate more exercise into their lives, the optionality of the motor feature means they can treat their Pedego like a normal bicycle when it fits their needs.

“People who wouldn’t necessarily get on a bike like this bike,” adds Plough.  For some, the added security provided by the electric motor can mean the difference between riding a bike and not riding a bike. Napua recalls a conversation with a customer who was interested in cycling, but was worried she would be embarrassed if she had to walk the bike uphill. Riding a Pedego alleviated this concern.

The Charles Paddock Zoo in Atascadero welcomed two red panda cubs to its family on June 15. Due to the summer heat and high mortality rates of cubs born in captivity, the cubs were born inside a nesting box in an air-conditioned holding area.  The cubs and their mother have been closely monitored by zoo staff and have now started to move around on their own.

The zoo celebrated International Red Panda Day on Sept. 21 and attendees got a chance to meet the new parents.  Summer hours at the zoo are 10 a.m. to  5 p.m. every day.