Catch Julia Morgan, Architect: Challenging Convention at the University Art Gallery in the Dexter Building Tuesdays through Saturdays from 11 a.m. to 4 p.m. View the exhibit online at artspaces.kunstmatrix.com/en/exhibition/
6796640/julia-morgan-architect through April 30.

Architect Julia Morgan was the queen of firsts.

"Julia Morgan is unquestionably among the greatest American architects of all time and a true California gem," U.S. Sen. Dianne Feinstein said in a letter recommending Morgan for the medal, which was awarded to the architect posthumously in 2014.

While the barrier-breaking architect may have worked on more than 700 buildings across the country, including Hearst Castle, and is well known in California, that fame isn't necessarily ubiquitous. When Cal Poly Associate Professor of Architecture Jennifer Shields moved to the area seven years ago from the East Coast, she said she didn't know anything about Morgan.

But the more she learned about Morgan, the more excited she got, especially being able to go into the university's Kennedy Library Special Collections and Archives to see the innovator's drawings in person. Shields said Cal Poly has a collection—one of the largest, if not, the largest—of Morgan's original work and correspondence. 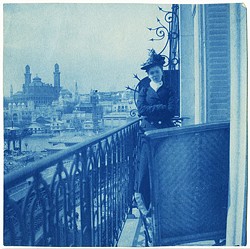 Shields found herself "wanting to dive into the archive more, spending more time looking at these artifacts myself, and the more time I spent doing that, the more I thought that people should see this," she said. "More than just my students."

And from Jan. 15 to Feb. 11, people can do just that. The Cal Poly College of Architecture and Environmental Design presents Julia Morgan, Architect: Challenging Convention at the University Art Gallery in the Dexter Building. An interactive virtual tour mirrors the exhibition and will be open to the public through April 30. Shields curated the exhibit with the help of Jessica Holada and Laura Sorvetti in Special Collections and Archives as well as many students, including architecture fifth years Munira Aliesa and Anja Wimmer.

"It's meant to be a deep dive into her time in Paris and her work in San Simeon [at Hearst Castle], but we really wanted to give a sense of her other work as well," Shields said. It's a "combination of original drawings and photographs of her work and original letters and correspondence of her work that really show how these projects happened, and really more of a window into her personal life."

Morgan was media averse—a private person who really wanted her work to speak for itself, Shields said. The correspondence showcased in the exhibit, which voice actors give life to via QR codes throughout the gallery, includes letters between Morgan and her cousin while she was living in Paris, highlighting the two-year struggle to get admitted to the École des Beaux-Arts; the back-and-forth between William Randolph Hearst and Morgan over the almost three decades that she worked on Hearst Castle; and letters between Morgan and other clients.

"I think it's that she didn't feel a responsibility to work in a particular style," Fields said. "She worked in different aesthetics and adapted her work ... depending on what her clients wanted, she would kind of just adapt her work to her clients' needs and wants."

That spirit of collaboration is different than the architects of today, Shields said, who we would think of as imposing their "singular vision" onto a project. Morgan's focus on relationship-building with her clients is something that really shows at Hearst Castle, which incorporates classic and modern architecture with relics that Hearst imported from Europe and Asia, as well as art deco and Renaissance sculptures and paintings.

The exhibit isn't necessarily architecture specific, she said. But it does include Morgan's original drawings, a technique that many architects don't really use anymore. Much of their design work is done on the computer. Shields said the exhibit is a reminder to step away from the computer screen and spend more time within the creative process.

"They really are little works of art, her sketches from the École and also her sketches of Hearst Castle," Shields said. "It was partly a passion project for me, individually, but also a pedagogical tool—a way that I can help teach students about drawing and how we represent the built environment." Δ