People who create things in their minds by themselves

Photographer Michael Childers brings his 'Icons and Legends' to SLOMA

Part of the appeal of photographer Michael Childers’ celebrity portraiture lies in the knowledge that his work could never be replicated today. In the ’70s, Childers captured John Travolta, Julia Roberts, Anthony Hopkins, and The Shining’s Shelley Duvall—all of them barely older than 20 and just starting their careers. But the creative freedom Childers enjoyed in those early sessions, the photographer says, is now a thing of the past. 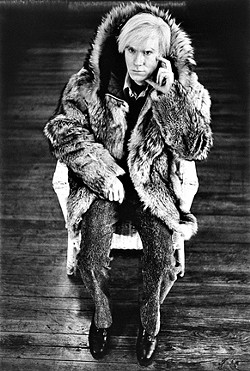 “It was wonderful to work with them, because their image wasn’t fixed by their PR people, and we could experiment and we could do interesting, creative things with them,” Childers recalled.

Childers studied film at UCLA, where he also took photography courses from such greats as Edmund Teske and Robert Heinecken. His interest in photography had already been kindled when, as a boy, he received his first camera, a 35mm Minolta, from his father. In college, however, the hobby morphed into a primary source of income, as Childers found himself surrounded by aspiring actors and musicians in need of a good headshot.

Childers soon found work on the set of Kenneth Tynan’s off-Broadway musical Oh! Calcutta!, an experience that had a transformative effect on his career. Photographing the production’s all-nude cast sparked Childers’ fascination with capturing the human body, a subject the photographer would continue to explore for decades to come. (Dancers and nude yogis have since been some of his muses.) But it was through his work with Tynan that Childers was invited to work as a photographer for the National Theatre of Great Britain, under Sir Laurence Olivier, then the theater’s artistic director. At 24, Childers was the only American ever to have held a position at the revered British institution—a fact that holds true to this day. Childers photographed the greats of the British stage—Maggie Smith, John Gielgud, Ralph Richardson—as well as newcomers such as Alan Bates and Anthony Hopkins.

An extremely close shot he later took of Olivier revealed the actor’s trust in Childers.

“He loathed photographers, but he trusted me. He would never have allowed any other photographer to come in that close,” Childers recalled. “And just before I got the camera in that close, he snarled at me with a smile and half a laugh, and he said, ‘I assume you’re coming in to get my mean upper lip, my dear.’”

Throughout the ’70s and ’80s, Childers went on to capture stars like Clint Eastwood, Dustin Hoffman, Steve Martin, Demi Moore, and French actress Catherine Deneuve—who seems to gaze past the camera in a sort of melancholy reverie, like a woman unaware that she’s being watched.

(“She was very whimsical, and a thinker,” Childers remembered. “She would float off. Great reader; very intelligent, as well as beautiful. Dreamy, a dream quality to her. I loved that. You don’t find that in American actresses very often.”)

Often, Childers found himself in the delicate position of shaping how these young stars would be perceived. Such power is now wielded exclusively by PR folk, he lamented.

“Now, unfortunately, the publicists have a stranglehold over Hollywood, and over photography. It’s really killed most of the creative photography in Hollywood. Because of the publicist, the paparazzi in the streets have incredible power, because that’s the way the magazines can get pictures now.

“So I don’t care if the paparazzi harass these people on the street,” he scoffed. “It’s the publicist’s fault. They want the fame, but they don’t want the responsibility.”

The advent of the celebrity publicist drew Childers away from Hollywood actors and toward other creative types, people whose “image” wasn’t cemented in stone.

“I much prefer photographing artists and architects and writers,” he said, describing these individuals as “people who create things in their minds by themselves.”

Childers’ show, “Icons and Legends,” currently on view at the San Luis Obispo Museum of Art, is a collection of famous actors and musicians, but also artists like Ed Ruscha and David Hockney, and writers like Tennessee Williams. In one shot from this collection, Williams turns to stare leerily at the camera, his eyes crazed and enormous.

“He’s a genius, ’cause he’s half crazy!” Childers laughed. “He had a twinkle and a strangeness about him. He was also doing a lot of speed. He was funny, very scatological and outrageous. And he’d had two or three glasses of Jack Daniels, which, you know, that and maybe a little speed left over. He was great. I loved him.”

The adjoining SLOMA show, “Images of Warhol,” reveals another facet in Childers’ brilliant career: his longstanding friendship with Andy Warhol.

As a founding photographer of Warhol’s Interview magazine, Childers photographed the beautiful people of the art world, often training his lens on that world’s epicenter, Warhol himself. Surprisingly, despite his famed entourage, the artist is conspicuously alone in all 25 photographs that comprise “Images of Warhol.” His expression ranges from thoughtful to stormy, from playful to brooding and distracted. Seeing him so isolated seems to emphasize the “artist” component of “celebrity artist”—the former word invoking flashbulbs, debauched parties, and mass adoration, while the latter, paradoxically, signals a solitary, quiet, internal struggle to create.

But it’s this moment between words, between opposing ideas, that Childers, too, must inhabit.

Arts Editor Anna Weltner’s mind is actually quite crowded. Contact her at aweltner@newtimesslo.com.