Just for fun, stop reading this and go find The Dan Horne Band's video for "The Motorcycle Song," and then after you've watched it, find their video for "Blackjack." Now that you're back, you have an idea of who Dan Horne is, and you'll be happy to know he and his band are coming to SLO Brew Rock this Sunday, March 28 (3 to 6 p.m.; very limited in-person attendance; no tickets—first come, first served; the audio will be broadcast into the outdoor seating area in case you can't make it inside; facebook.com/events/188814836090787).

Horne sounds like a jangling folk-hippie living the freedom dream, while on "Blackjack," his sound is synth-driven triptastic psychedelic orchestral boogie opus. It's sort of an absurd range, like Ween absurd, and if you don't know Ween, go look them up. I'll wait. Horne is also a member of the Grateful Dead tribute act Grateful Shred as well as Circles Around the Sun. What will his Sunday show be like? No idea, but judging by his two online videos, which were created by videographer McKenna Kane, this should be very interesting indeed.

Horne is a talented producer and engineer in his own right, at his very own Lone Palm Studios in Echo Park, so when he's not touring, he's recording other acts, but thanks to COVID-19, Horne has for the very first time had the time to craft and release a recording under his own name, the four-song EP called The Motorcycle Song EP, "recorded and performed entirely by him during the Great Quarantine of 2020," according to press materials.

The EP's other tracks include Canned Heat's "Poor Moon," and "Rhythm 55" that's "grooving along like a Dillard & Clark backing track buttressed by a steady drum machine, showcasing Dan's formidable pedal steel skills." His bandmates for this show are in other acts like The Growlers, Amo Amo, Cass McCombs, Allah-Las, and Mapache. It's as if Horne has enlisted LA's hippie mafia.

Get the EP, bust out your fringe jacket and headband, and get your Dan Horne groove on.

If you're more into big band jazz than hippie/boogie, take note: The Basin Street Regulars will livestream a concert by The Friendly Neighborhood Big Band this Sunday, March 28 (2 p.m. on facebook.com/BasinStreetRegulars and youtube.com/user/BasinStreetRegulars).

The Friendly Neighborhood Big Band is a 16-member traveling big band formed in March 2019, the brainchild of Director Mitch Latting, David Johns, and Danny Beher, with bandmembers from both SLO and Santa Barbara counties.

"We've been providing audiences with performances of great jazz standards as well as original jazz tunes," the band said in press materials. "We have access to over 1,000 songs of various composers and arrangers."

There's some lush sounds flowing from Zen Mountain Poets on their new single "Game of Mystery," a song about life's mysteries, the importance of free-flowing love, releasing grudges, and reaching out to your fellow human beings.

Recorded at SLO's Avalon Digital Recording Studios and engineered by Kip Stork, Brian Aunger, and Billy Clayton, the tracks were also mixed by Clayton and mastered by Griffin Breshears, and they come with some cool cover art by Timo Beckwith and Clayton.

"Time Waves" is a jamming mostly instrumental except for a finale chorus. "They will be available for downloading and streaming at reverbnation.com/zenmountainpoets and also for listening on YouTube and our social media channels," Saxer said. "The songs are currently submitted for digital distribution and will be on other streaming platforms soon." 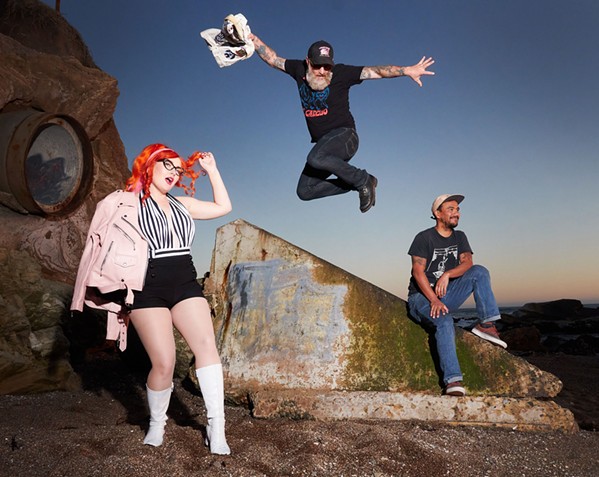 "They've sent me the tracks they recorded," Roessler said in press materials. "They sound so good, it's almost like they're showing off. This is going to be easy."

Hayley and husband, Dr. Cain, Esq., will join Roessler in the studio to record overdubs for what will be their third full-length album, a follow-up to 2020's Vintage Millennial. They're also riding high off their successful new single, "Church of Flag," which pays tribute to old-school punks who've stayed true to the genre through the years.

"Hayley and the Crushers is the naked embodiment of power pop punk, which I've always loved," Cotton said. "Hayley is a multi-talented force of nature with too much style for her own good, and naturally, we hit it off immediately. This is a hard-working band who knows who they are and where they need to go. And we're excited to have them on Kitten Robot. Plus, she's the only other person I ever met besides myself who had written a song about Angelyne. That cemented our bond for all time."

Look for more good things to come from Hayley and The Crushers! Δ