Rolin Jones and Ron Fitzgerald created this origin story about gritty LA private detective Perry Mason (Matthew Rhys). Set in late 1931 and '32 during the Great Depression, the story takes place long before Mason becomes the defense attorney you know from the many novels by Erle Stanley Gardner, the popular TV series with Raymond Burr, and the made-for-TV movies. Mason's struggling to keep afloat when he's hired by attorney E.B. Jonathan (John Lithgow) to look into the kidnapping of a child, whose parents—Matthew (Nate Corddry) and Emily Dodson (Gayle Rankin)—have become the center of LAPD Detectives Holcomb (Eric Lange) and Ennis' (Andrew Howard) investigation. (eight 60-min. episodes) 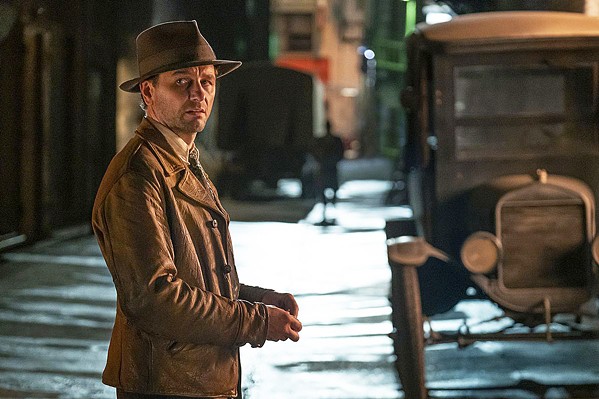 Glen By the time you read this, a third episode of HBO's eight-part miniseries will have been released, but so far we've only seen the first two, and they're thoroughly engaging. This is a much more intimate look at Mason with a lot more backstory than even the novels provide. We discover Mason fought in The Great War but left the service with a dishonorable "blue ticket," he struggles with his drinking, he's estranged from his wife and 9-year-old boy, and it's all he can do to hang on to his deceased parents' ramshackle two-cow dairy farm. He is, however, an insightful and tenacious detective working in a corrupt city filled with unsavory Hollywood players, tycoons rich from an oil boom, a shady LAPD, and the impending 1932 summer Olympic Games on the horizon. The series' whole vibe is reminiscent of Roman Polanski's 1974 neo-noir Chinatown, with Mason a stand-in for Jack Nicholson's character Jake Gittes. As in Chinatown, big changes are afoot in LA, with money to be made. Part of the story also involves radio evangelist Sister Alice (Tatiana Maslany), whose Radiant Assembly of God is capitalizing on Prohibition and the Women's Suffrage movements. There are a lot of complicated machinations at work in the city, and maybe, just maybe, this child kidnapping is about more than a ransom payout.

Anna Mason is a tough nut to crack, and he also isn't interested in leaving something be just because someone—or everyone—is telling him to. I will say that HBO should throw a content warning up before episode one: There's a pretty gruesome depiction of a deceased child that's rough to see. However, that kidnapping and murder setup is Mason's next obsession. He knows better than to trust anyone or hold anyone beyond the veil of suspicion and because of that, he finds the lives surrounding this little lost child are not as innocent as they may first seem. Rhys is a great choice for the brooding detective, somewhat mysterious but really just tragically flawed, a man who can't conquer the inner demons that haunt him. The noir nature of the series is moody and bleak, the glitz and glam have been rubbed off of Los Angeles, and the war and depression have taken their toll. The showmanship and glitter of Sister Alice's performances hide the real inner workings of the church, and I can't wait to see where the series takes that storyline. I'm hooked.

Glen Rhys is perfect for the role. He's got a hangdog everyman quality. His Mason is jaded, cynical, and world weary. He's seen things he can't un-see. It will also be interesting to learn more about his service. In the second episode—also gory, by the way, with lots of war injuries—we learn more about his "blue ticket" discharge, and it should be another interesting storyline to see play out. As this series was first being developed a few years ago, Robert Downey Jr. was slated to play Mason. That might have been interesting, but Rhys seems to own the role. The acting's definitely solid throughout. In the novels, Mason's love interest is Della Street (Juliet Rylance), and as of the second episode, no romance has developed. Another character is Mason's righthand man, Pete Strickland (Shea Whigham), who in this series has a more cantankerous relationship with his sometimes boss. Something stinks in the City of Angels, and watching Mason ferret it out makes for a gripping series. Watch it!

Anna I can't say I'm too familiar with the novels or the 1957 series, just the general idea behind the character, and this rendition has me all in. I love a flawed character with some grit, and Perry Mason certainly fits that bill. The host of characters around him also have some deep flaws, or at the very least some shady business going on. There's definitely something up with Sister Alice and her church, the murdered kid's parents aren't looking great either, and everyone seems to have secrets to hide. The introspection and Mason himself and the greater story of the case he's trying to crack are all effective devices to keep the story rolling. After watching what he went through in the war, it's no wonder Mason hides behind a tough exterior and a bottle of booze. I can't wait for more episodes of this series! Δ