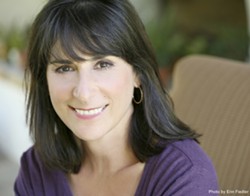 Karla Bonoff is one of those artists you don’t know you know. She’s not a household name, and yet you’ve probably heard her songs either from her own mouth or sung by the likes of Bonnie Raitt (“Home”), Wynonna Judd (“Tell Me Why”), and Linda Ronstadt, for whom Bonoff has sung background vocals.

Her song “Somebody’s Eyes” was featured in the film Footloose, and “Standing Right Next to Me” was in 8 Seconds. Her best-known song, however, is “Personally,” which hit No. 19 on Billboard’s Hot 100 and No. 3 on Billboard’s Adult Contemporary chart in 1982.

With 40 years in the business, she still manages to pen earthy, haunting, unforgettable tunes. See for yourself when Karla Bonoff plays the fifth annual Benefit Concert for Escuela del Rio on Saturday, Sept. 4, at 7 p.m. at Castoro Cellars Winery in Templeton. Local guitarist Martin Paris will open.

Escuela del Rio is a day program for adults with developmental disabilities in North San Luis Obispo County: “Our wide range of programs successfully demonstrates how adults with differing abilities can maximize their alternatives and choices for living and working in society, enabling them to become participating and contributing members of their community.”

Tickets ($30) are available at Escuela del Rio, KMan Cycle and Run, Matt’s Music Stage and School, or the Castoro Cellars Tasting Room; via phone at 238-0725; or online at castorocellars.com.

Gates open at 6 p.m., and the show starts at 7. Bring your appetite! A delicious tri-tip barbecue will be available from the Paso Robles Kiwanis for $10, with the proceeds benefiting Escuela del Rio.

On a sadder note, Kenny Edwards was originally scheduled to join Bonoff, but he was stricken with a life-challenging illness while on the road in Denver, Colo., and after returning home to California, he passed away a couple weeks ago. More information about Edwards and his music is available at kennyedwards.com, where you can buy his latest CD, Resurrection Road. 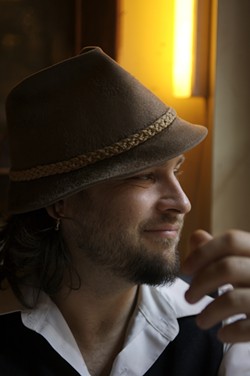 Award-winning musician Lipbone Redding is known as the King of the Lip Trombone, and he’ll be backed by the Lipbone Orchestra, an ace two-person (Jeff Eyrich on upright bass, Rich Zukor on drums and percussion) NYC rhythm section, performing both original and classic material packed with New Orleans swing, Memphis grooves, and New York City style.

An inventive singer-songwriter-guitarist-voice-instrumentalist and former subway musician, Redding will “bring the monster groove and a show greased with uncanny riffs of vocal trumpeting, booming mouth percussion, hilarious side moments, and esoteric lyrics.” 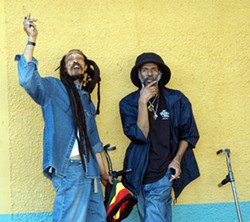 The three original members of Israel Vibration—Lascelle “Wiss” Bulgin, Cecil “Skelly” Spence, and Albert “Apple Gabriel” Craig—first met as children at Kingston’s Mona Rehabilitation Center, where all three received treatment for polio. Through a shared spirituality and faith in Rastafari, they forged a friendship that overcame their illness and poverty.

Eventually, the trio’s spiritual beliefs prompted their departure from the center, so they took to the streets of Kingston where they harmonized for their suppers. Since then, they’ve become international superstars. In 2007, Israel Vibration released Stamina on Doctor Dread’s newest label, Tafari Records. They continue to tour the world, performing more than 100 concerts per year despite their disabilities.

Her new album, Ironwood, is currently being featured in Starbucks Coffee shops across the country. Check out this verse from opening track “Enjoy the View”: “Every star in the sky will shine for you; every dreamer that died survives in you.” Check her out!

Don’t forget you’ve got two worthy fundraisers to choose from on Thursday, Sept. 2. All-star band The Ondo-Matics plays a 9 p.m. fundraiser in Mo-Tav benefiting Operation Surf, which helps wounded veterans learn to surf ($15 at the door). ZZ Top headlines a benefit with the Tommy Castro Band at 7 p.m. at Avila Beach Resort to benefit OPTIONS, which helps disabled individuals in the community. Get tickets at Boo Boo records and other Vallitix locations.

Lakes play a CD release party at Downtown Brew on Thursday, Sept. 2 (7 p.m.; all ages; $8 presale or $10 at the door), with The Honey Trees opening. I haven’t heard their new album because they didn’t send me a copy (grrrr!), but if it’s anything like their debut EP Photographs, you’ll want a copy of The Agreement.

You need more twangy country music in your life, I can tell, and you can get a double dose when Red Eye Junction plays a 7 to 9 p.m. show at The Clubhouse on Thursday, Sept. 2, and then another show at The Range in Santa Margarita on Sunday, Sept. 5, from 6:30 to 9 p.m. I’ve been meaning to get up there and eat. I hear the food is amazing! And Red Eye Junction aids digestion!

Rock out to the rootsy sounds of The Hydromatics on Friday, Sept. 3, when the rockabilly act plays a 7 p.m. show at Native Lounge with San Diego’s Rolled Numbers and some other acts. It’s part of an Art and Music Exhibition.

You’ll get five chances to hear the awesome, Wilco-esque rock act Northstar Session in the coming days. “We just got back from a two-week northwest tour and are starting our next album this week, which should be out by late fall or early winter,” said Matthew Szlachetka. “We also just got filmed on the NBC show Parenthood playing our song ‘You Come Up Like A Rose.’ This should air on Sept. 28.” See them Friday, Sept. 3, at 9 p.m. in Mongo’s; Saturday, Sept. 4, at 3 p.m. on KCBX’s SongTown with Sonnie Brown; then at 5:30 p.m. during an in-store at Boo Boo’s; then at 9 p.m. in Frog and Peach; and Sunday, Sept. 5, at 1 p.m. at The Cliffs.

If you like beer, food, and music, may I present Exhibit A: “Brews & Bites 2010.” The San Luis Brewers Guild holds its second annual “Brews & Bites” event on Saturday, Sept. 4, in Mission Plaza from noon to 6 p.m. The event features handcrafted beers paired with foods from local restaurants, and Nada Rasta, Cuesta Ridge, Lakes, and Penny Jar performing. Choose from three available packages: a commemorative pint glass, four tasting tickets, and one raffle ticket for $15; a glass, 20 tasting tickets, and two raffle tickets for $25; or a glass, 20 tasting tickets, three raffle tickets, and an official T-shirt for $35. Order online at slobrewsandbites.com. Proceeds from the event benefit Woods Humane Society and Earth Day Alliance. All food is available on a cash basis—no tickets required.

Here’s a good way to celebrate Labor Day weekend: Hit Eberle Winery on Saturday, Sept. 4, from 12:30 to 4:30 p.m. and enjoy the music of Chronic Blues while relaxing on a deck overlooking the beautiful Eberle Estate Vineyard. Chow down on Gary Eberle’s famous tri-tip sandwiches, salsa, coleslaw, and potato salad. And then there’s wine, people. The barbecue is $8; wine may be bought separately.

The third annual Almond Festival is happening on Saturday and Sunday, Sept. 4 and 5, at 4681 Almond Dr., Templeton, with Whiskey Chimp, Jackass, Big Tweed, Sideshow Preachers, Lost Coast Stragglers, and Geezers on the Loose performing. Come on up at 1 p.m. on Saturday; bring low-back chairs, a dish to share, and your drink of choice. Grills will be available for use. Camping and jamming are encouraged! There’s a $15 suggested donation, but kids get in free. Call 776-3495 for more info.

Truth About Seafood wants to send off your summer in style, so they’ll be rocking the beach on Sunday, Sept. 5, with a show at Dolphin Bay Resort from 2 to 6 p.m. Just so you know, lots of people have the uncontrollable urge to get naked when Truth performs. Wear layers to slow yourself down.

I hear tell there’s gonna be another Twang-n-Bang at Frog and Peach on Sunday, Sept. 5, from 4:30 to 11 p.m. Expect awesome music from the likes of Cuesta Ridge, Penny Jar, Ghost of Guadalupe, Nickels & Dimes, Mudthump, and The Cross Brothers. Can I get a yee haw? Yee haw!

Mimi Blais will appear in concert in the Los Osos home of Stanley and Carol Stern on Sunday, Sept. 5, at 7:30 p.m. The versatile performer and classically trained pianist performs everything from ragtime to jazz to folk to blues. She’s the female Victor Borge! A $20 donation is requested, and reservations are necessary. Call 528-6557 or e-mail sstern3126@aol.com.

Wanna learn how to do that thing with your hips? SLO Motion Salsa will be starting a salsa dance lesson series every first and third Tuesday night at the SLO Vets Hall beginning Tuesday, Sept. 7, at 7 p.m. with instructor Liliana Graham. Following the dance lesson, Salsa band De La Bahia will be playing music for you to try out your new moves—all for only $5!

The Clubhouse’s Songwriter Showcase will feature Jody Mulgrew on Tuesday, Sept. 7, at 7 p.m. You’ll feel like you’re listening to a ’20s-era crooner mashed-up with a coffeehouse folkie. 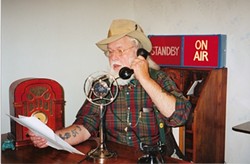 A new TV show just for you

“Two years after U. Utah Phillips’ passing, his radio legacy, Loafer’s Glory: The Hobo Jungle of the Mind, will be broadcast in a videoization on Public Access TV Charter Cable Channel 2 beginning Thursday, Sept. 2, at 7:30 p.m. The show will be repeated on Mondays at 2 p.m. and Tuesday mornings at 7:30 a.m.

“A new episode of the 200 shows will be broadcast every two weeks,” said Kristan Mulgrew, the station’s traffic coordinator.

“Phillips was a unique folksinger/storyteller,” Baumgarten continued. “The radio broadcasts recorded at KVMR in Nevada City, Calif., during the last three years of his life are a collage of rants, poetry, reminiscences with music, and songs from over 1,000 tapes of everything under the sun. Old friends who are guests of the shows include Rosalie Sorrels, Pete Seeger, Paul Robson, Kate Wolfe, and Annie DiFranco. Some of the topics include tramping, politics, hard times, busking, radicalism, cowboys, and riding the rails.

“Utah was a sort of Renaissance Man,” added Baumgarten, a fellow folksinger who’s bringing these rare radio recordings to a Central Coast audience. “His interests extended from Egyptology to opera, hoboing, railroads, and the plight of poor people worldwide. There was a huge emphasis on the history of the IWW Union (Wobblies) for which he was a union organizer. He ran for the Senate in Utah on the Peace and Freedom Party ticket and even got a couple of thousand votes.”

South County resident Merrell Fankhauser seems to be more popular now then ever! His ’60s and ’70s songs keep getting added to new oldies compilations, and now a German musician has recorded a tribute album!

“German musician Golly McCry just released a tribute CD to me!” said a flabbergasted Fankhauser. “He’s already on the charts in New Jersey and California with ‘Please Be Mine,’ a song I wrote in 1964! He covered all my early ’60s songs! It’s a real honor.”

Plug in both artists’ names on YouTube and check out the results, or just go and buy the album via eBay or gemm.com.