Pesto or Pistou - It's All Delicious

While attending last year’s Basil Festival at Lone Madrone Tasting Room & Herb Farm (formerly Bonny Doon and Sycamore Herb Farm) as a judge for the pesto contest, I was impressed by the array of recipes from talented local cooks. But the most delectable pesto of them all was the result of an intriguing recipe by Julia Hawkins that included jalapenos. Not only did it win commendation from the celebrity judges as the most creative recipe, it won the people’s choice, too. If you have a special pesto recipe, I have good news; it’s not too late to enter this year’s event. Hawkins told me she plans to return after winning $100 in gift certificates for her outstanding recipe, which won two out of three categories.

It all takes place on Saturday and Sunday, August 16 and 17, at Lone Madrone, with tastings of their fine wines, basil beer by Firestone Walker Brewing Co. (I liked the basil beer more than I expected but I’ve long been a fan of Firestone Walker brews), basil ice cream by Doc Burnstein’s, plus entertainment for the entire family all day long. The pesto contest, of course, lures all the local foodies, who also get to taste the various pesto recipes and vote for their favorite.

I can safely say it’s not too late to enter the contest because you can show up as late as 1 p.m. on the first day of the Basil Festival when the judging takes place. Of course, you’ll be doing the organizers a favor if you let them know you’re participating; just call ahead. The contest categories are: traditional, creative, and the people’s choice. This year I’ve agreed to be M.C. during the contest and judge with Anne Vidor of Central Coast Magazine, Lone Madrone winemaker Neil Collins, and some local chefs.

There’s no entry fee to attend but they’re hoping basil lovers will donate $5 as they enter for the beneficiaries. Proceeds from the Basil Festival will benefit the Central Coast’s KCBX-FM public radio and the Boys & Girls Club of Paso Robles. They’re conducting a raffle for a trip for two to Jamaica, sponsored by Air Jamaica. Other prizes include over-night stays at the Marriot and La Quinta hotels in Paso Robles, gift certificates for Artisan and Villa Creek restaurants, and Lone Madrone gift certificates.

If you love Italian food, it’s likely you love pesto. In one of my favorite Italian cookbooks, The Italian American Cookbook, author John Mariani wrote: “Once, when asked by the press how she got her goddess-like figure, Sophia Loren replied, ‘Everything you see I owe to spaghetti.’” According to Mariani, one of my favorite New York restaurant reviewers, the word pesto derives from the pestle and mortar used to grind “fresh basil, garlic, olive oil, and cheese into a sauce.”

Those ingredients form what he describes as the classic Ligurian pesto, to which toasted pine nuts are commonly added. Pesto, he admitted, might contain any number of ingredients when made by an American cook. The Wikipedia Web site notes that France has a similar sauce called pistou, made of only basil, garlic, and olive oil. Whether it’s simple or complicated most pesto recipes complement pasta, fish, or bruschetta. So treat yourself to the best of Mother Nature’s gift at the annual Basil Festival. 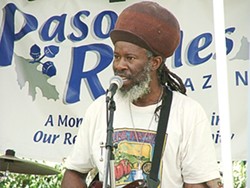 On Saturday, Aug. 16, the gate opens at noon. Live music begins at 3 p.m., with food, wine, beer, and art vendors. The pesto entry deadline is 1 p.m. with judging at 2 p.m., winners will be announced at 3:30 p.m. Ras Danny & the Reggae All-Stars will perform at 4 p.m.. The raffle drawing, including a trip for two to Jamaica, will take place at 6 p.m., and the festival concludes for the day at 8 p.m.

On Sunday, Aug. 17, the gate opens at 10:30 a.m. The fun begins with a green-eggs-and-ham brunch by the talented Paso Robles chef Jeff Scott. The fee for adults is $10 and for kids it is $5. Steve Crouch will tell stories at 11 a.m. There will be a bounce house for kids and world-guitar-fusion licks by Incendio. The festival ends at 2 p.m. The Lone Madrone tasting room is open until 5 p.m. Call 238-0845 or visit www.lonemadrone.com for details.