The Morro Bay Aquarium is set to close its doors in the fall but not before receiving a letter from the People for the Ethical Treatment of Animals (PETA) demanding the release of an octopus the aquarium recently acquired.

Kearney Whelan Robinson, a campaign strategist for PETA, said the organization learned in early May that an octopus was caught by a Morro Bay fisherman who gave it to the Morro Bay Aquarium. Whelan Robinson said a letter was sent to aquarium manager John Alcorn on May 10.

"Octopuses are highly intellectual individuals who belong in the sea, not in tanks of chemically treated water," PETA Executive Vice President Tracy Reiman wrote in the letter. "PETA is calling on the Morro Bay Aquarium to go out on a high note by releasing this octopus back to her ocean home, where she can return to the freedom she once knew." 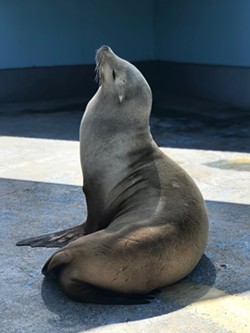 Whelan Robinson said that PETA hasn't heard back from the aquarium. New Times reached out to the Morro Bay Aquarium for comment, but there wasn't a manager present or on duty.

In 1995, the aquarium's right to rehabilitate animals was revoked by the National Marine Fisheries Service. The facility was also cited for alleged Animal Welfare Act violations in 2009 and 2010, and residents have repeatedly criticized the aquarium for its outdated facilities.

The nearly 50-year-old Morro Bay Aquarium's lease with the city expires this year, as Morro Bay declined to renew it. In 2016, the Morro Bay City Council signed an agreement to partner with the Central Coast Aquarium, an Avila Beach-based nonprofit, to turn the aquarium into an educational marine facility. The nonprofit plans to build a new and expanded aquarium after the Morro Bay Aquarium closes in September.

In April, two California sea lions and a Pacific harbor seal were relocated from the aquarium to Six Flags Discovery Kingdom in Vallejo.

Six Flags Communications Manager Nancy Chan said animal care specialists from the park, in collaboration with a team from the Marine Mammal Center, moved the trio.

"Currently the animals are still under quarantine but will be moved shortly to the Seal Cove exhibit. They have adjusted well to the new environment and are thriving," Chan said.